Education for Egyptians with disabilities 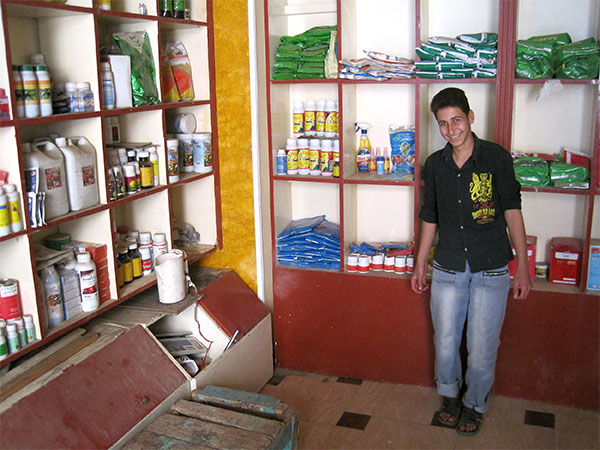 Bola Melad Ragheb, who limps because of polio, stands in the shop where he works after school, earning enough money to pay for his sister’s school costs. He credits an MCC Global Family education program with giving him the confidence to apply.
MCC Photo: Isaac Friesen

Bola Melad Ragheb looks like a typical Egyptian youth, with a shock of dark hair and a warm smile. His main passion is soccer, and as a fan of Real Madrid star Christiano Ronaldo, you will never find him wearing the blue and red apparel of Madrid’s rival Barcelona.

Only 17, he likes playing soccer on a computer with his friends. He prefers tea to coffee and relies on the greasy goodness of French fries to help him through the long, vegan-food-only, Coptic fasts.

Yet when Bola walks, it’s apparent he faces an added degree of adversity. At age 3, he contracted polio, causing him to limp.

“Because of the problems I have with the muscles in my legs, I grew up thinking I wasn’t good at anything,” he says. “Then my mom heard about this program that helps young people with disabilities. I learned that I have potential, and decided to try things out to see what I might be capable of.”

Bola is referring to a program, run by St. Mary church in the town of El Fashen, whose aim is to help students with disabilities integrate into the school system and succeed in their education. The program is sponsored by Mennonite Central Committee’s (MCC) Global Family education program through partner Ekhlas Coptic Organization for Development.

“One of the main goals of the program is to build the students’ confidence and encourage them that even though they have disabilities, they also have capabilities and rights,” said Trish Wiebe, MCC Egypt’s program coordinator, from Blumenort, Man. The program also helps bring together people with disabilities who find support through friendships.

Bola represents the majority of Egyptians who in contrast to world news about Egypt’s politics, unrest and ongoing revolution are just trying to make a living and support their families. He lives south of Cairo in Beni Suef province, a rural farming area that’s one of the poorest in the country.

Beni Suef is home to unemployment, illiteracy, and lack of social services. Although school is required through Grade 6, supplies cost money, and in Beni Suef, parents are less likely to spend money to educate girls and children with disabilities beyond the required level.

Bola is among the lucky ones. He is getting a secondary education, and after a year in St. Mary church program, he gained the courage to apply for a job at a fertilizer shop. Not only did he get the job, but Bola was soon trusted to help customers and manage the shop every morning.

Currently, he is in the second year of a three-year vocational school, studying commerce. He continues to work part time at the shop in the evening, studying between customers. When Ekhlas offered to pay for Bola’s younger sister’s school expenses, he declined because he was making enough money to pay for her education himself this year.

Like many Egyptians, he works to help support his family, which includes two sisters and three brothers.

“It feels great that I can help my family in this way,” he smiles. “God willing, I will one day have a shop of my own.”