What's New
Multiply September Ukraine Updates
Volunteers in B.C. honour Leamington woman tragically killed...
Delete or not to delete, that is the...
Believers bring water for drought baptism
Encouragement to those in the arena
Keeping attention and making an impact: A few...
Open hands to reconciliation
From the editor
Approaching truth and reconciliation with love in our...
MB Seminary offers new MA in Transformational Leadership...
Home Life & Faithfeature articles Does the resurrection make a difference – in everyday life?

Does the resurrection make a difference – in everyday life? 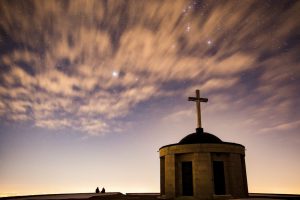 Photo by Luca Baggio on Unsplash

It was the unshakeable conviction that Christ was alive that made the disciples of Jesus into such powerful witnesses to a living Christ.

By the resurrection, as C.S. Lewis observed in Miracles, Christ “forced open a door that had been locked since the death of the first man. He has met, fought, and beaten the King of Death. Everything is different because he has done so.”

Even among those who have no doubts about the resurrection event, however, we often find little to convince us that the great truth of the resurrection has any bearing on life. Is the Christian claim – that the resurrection makes a real difference in everyday experiences – true? Some of the lines of thought developed here as an answer were suggested to me by Michael Green’s booklet, Man Alive.

The resurrection and our guilt

When the apostles were hauled before the Sanhedrin to answer for the disturbance they were causing by preaching Jesus as Lord, they answered (among other things): “The God of our ancestors raised Jesus from the dead – whom you killed by hanging him on a cross…that he might bring Israel to repentance and forgive their sins” (Acts 5:30, 31).
We all know what it means to feel guilty. It may be caused by an exhibition of greed or lust or temper or dishonesty. This feeling of shame and of failure varies with individuals, depending on the norms according to which their conscience functions. Whenever a person acts contrary to any ideal they have accepted, they feel guilty (although this feeling of guilt can be lessened by overruling the conscience over a period of time.)

Scripture, however, insists that we are guilty, whether we feel guilty or not. Our dilemma is not so much guilt feelings (for which there may be a psychological explanation) as real guilt: we are all genuinely, morally responsible before a Holy God whom we have affronted and disobeyed. Our guilt is the consequence of our sin and it is this predicament that Jesus Christ dealt with at the cross.

For Paul and the other apostles, the cross was the burning centre of the good news that they preached. But how could a crucified Christ atone for sins? For a Jew, a crucified Jesus meant two things: that he was not the Messiah, for instead of leading Israel to victory he went down into ignominious defeat; and, that Jesus was under God’s curse, for Deuteronomy 21:23 explicitly stated that a hanged man is accursed by God. The fact that Jesus cried out on the cross, “It is finished,” might have been the last step in a great drama of deception but for one thing – the resurrection.

The fact that Jesus arose again is the assurance that he did cope with the load of sin and guilt on our behalf: he did win that titanic struggle with the power of evil.

When Peter spoke the good news to those gathered in the house of Cornelius, he recalled that the Jews had put our Lord to death and hung him on a tree (Acts 10:39). But this was not the end. “God raised him from the dead on the third day” (10:40). And what did all this mean? “[E]veryone who believes in him receives forgiveness of sins through his name” (10:43). Our guilt is gone.

The same message is proclaimed by Paul and Barnabas, preaching at Pisidian Antioch (Acts 13:33-38), and by Paul writing to the Romans (4:25) and Colossians (2:13-15). Throughout the centuries, people have found assurance in the resurrection that God has removed their guilt. As John Bunyan, in Pilgrim’s Progress, describes it: “He [Christian] ran thus till he came to a place somewhat ascending; and upon that place stood a cross, and a little below in the bottom, a sepulchre. So I saw in my dream, that just as Christian came up to the cross, his burden loosed from off his shoulders, and fell from his back; and began to tumble; and so continued to do, till it came to the mouth of the sepulchre where it fell in, and I saw it no more.”

The resurrection and our loneliness

Loneliness is one of the great maladies of our time, even though people are more closely tied by the mass media and other technologies than any former time. This feeling of homelessness and estrangement strikes young and old, married and unmarried, rich and poor. People join clubs, attend sports events, hurry to parties, crowd theatres and concert halls, but to no avail.

In A Place for You, Paul Tournier points out that every individual wants a place in life and that our day is suffering from a “vagabond complex.” The mobility of contemporary humans may add to this feeling of alienation, but there are those who spend much of their time away from home and yet do not suffer from the malaise of loneliness. Others are always at home but find no place to stand in life.

Malcolm Muggeridge, in Jesus Rediscovered, tells of the awful feeling that crept over him while with the British forces in Algiers when he first heard the term “displaced persons” used. He thought then that it was the most devilish term ever invented.

As we turn to the Scriptures, we find in the first pages of Genesis the poignant story of how man and woman rebelled against God, and so became aliens, losing paradise, their home. They pushed God out of their lives, for they wanted to live independently of God.

No one, however, has experienced such utter loneliness as did our Lord on the cross, when even his relationship with the heavenly Father was cut off. He cried out in anguish, “My God, my God, why have you forsaken me?”

But what does this knowledge that Jesus of Nazareth was the loneliest person who ever lived mean for us? It means that we will never be abandoned and left to ourselves, for this same Jesus rose from the dead; he is alive. The parting words of the risen Christ to his disciples were “I am with you always, to the very end of the age” (Matthew 28:20).

But how can the risen and ascended Lord be present with us, to overcome our loneliness? He is with us by his Spirit. In his farewell discourses, our Lord promised: “And I will ask the Father, and he will give you another advocate to help you and be with you forever – the Spirit of truth… I will not leave you as orphans [desolate]; I will come to you” (John 14:16–18).

The resurrection opened up the glorious truth of the universal presence of Christ. This presence is very personal, for by his Spirit the risen Lord dwells in every heart. “Now the Lord is the Spirit” (2 Corinthians 3:17).

The resurrection and futility

A frantic search is often underway for some cause to live for, something to invest one’s life in, some new frontier to discover. Underneath it all is the haunting fear that if one hitches the wagon of one’s life to a star, this star may in the end fall to the ground (as the writer of Revelation has it).

The reason for much of the apathy in the lives of people today is to be found in the fear that nothing we give ourselves to will last. Either a world holocaust or death, that grim reaper, will destroy our life work. And Paul was perfectly right when he wrote: “If Christ has not been raised, our preaching is useless and so is your faith… If only for this life we have hope in Christ, we are to be pitied more than all others” (1 Corinthians 15:14, 19).

To find meaning in what we do we must be sure that our work will abide. This assurance will be ours if we believe in the resurrection. At the end of the great chapter on the resurrection, and after that outburst of triumph, “Where, O death, is your victory?” Paul concludes: “Therefore, my dear brothers and sisters, stand firm. Let nothing move you. Always give yourselves fully to the work of the Lord, because you know that your labor in the Lord is not in vain” (1 Corinthians 15:58).

Not only are our labours not futile if Christ is alive, but our sufferings also take on meaning. If death were the end of it all, we would not risk our lives for the sake of Christ. We would not waste our energies seeking to build his kingdom. Paul, writing about his sufferings in Asia, says, “We felt that we had received the sentence of death. But this happened that we might not rely on ourselves but on God, who raises the dead” (2 Corinthians 1:9).

A bit later, in the same letter, he confesses that, although death works in his life, he does not cease to speak the good news, “because we know that the one who raised the Lord Jesus from the dead will also raise us with Jesus” (4:14).
Before Dietrich Bonhoeffer was led to his death by Hitler’s guards, he spoke to his fellow prisoners on the text, “Praise be to the God and Father of our Lord Jesus Christ! In his great mercy he has given us new birth into a living hope through the resurrection of Jesus Christ from the dead” (1 Peter 1:3). And as they took him away, he sent this last message to the Bishop of Chichester, “This is the end – but for me the beginning of life.”

Take away the resurrection and the foundation for Christian ethics also crumbles, and all efforts to do right are vain. Why should we try to live upright and godly lives if death ends everything? “If the dead are not raised, ‘Let us eat and drink, for tomorrow we die’” (1 Corinthians 15:32).

The resurrection is the answer to our guilt, to our loneliness, and to feelings of futility. This is what makes the gospel of the resurrection so relevant, so vital, so meaningful. It is not enough to confess that Christ rose from the dead two millennia ago. Nor is it sufficient that the church acknowledges its faith in the resurrection annually during the great Easter festival. We must, as Paul suggests, “keep the Festival” daily (1 Corinthians 5:8).

And how do we do this? By finding meaning in our daily tasks which we do in Christ’s name (they are not futile); by practicing the presence of the risen Lord in our daily life (we are not alone); by rejoicing in the deep assurance of sins forgiven (our guilt is gone).

—David Ewert has served as president of MB Bible College (Winnipeg) and chair of the Board of Faith and Life of the Canadian MB conference. He is professor of biblical studies emeritus and a member of Bakerview MB Church, Abbotsford, B.C. This article, in slightly different form, first appeared in the MB Herald, March 21, 1986.
David EwertEasterresurrection
0 comment

Hope for the shadow people