What's New
Through the conflict, life carries on in Ukraine
A FOCUS on Mission
Must Patience Be So Slow?
Harold Jantz: A Heart for the Mennonite Story
Lorlie Barkman: A Life of Creative Engagement
Last Days, First Days
Women in Ministry: Bertha Dyck
January Moment in Prayer “Holy Spirit—Fill Us!”
The Church as the Patient Body of Christ
Advent: Making Much of Jesus: Christmas Day
Home News Devastation in Haiti: ‘Yesterday, we lost everything’

Devastation in Haiti: ‘Yesterday, we lost everything’ 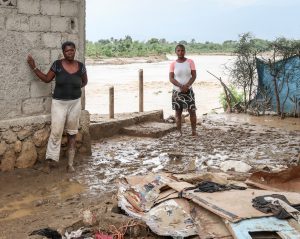 Sarditren Dete and Antovan Enit, residents of Cité Soleil, one of the poorest parts of Port-au-Prince, Haiti, stand where their houses used to be. They were washed away by Hurricane Matthew along with their possessions, livestock and gardens. (MCC photo/Paul Shetler Fast)

When rushing water of the River Gris, overflowing with rain from Hurricane Matthew, washed away Sarditren Dete’s and Antovan Enit’s houses and possessions, it destroyed their livelihoods too.

Mennonite Central Committee (MCC) representatives Paul and Rebecca Shetler Fast, of Pittsburgh, Pa., listened to their stories on Oct. 5, 2016, the day the rain from Category 4 Hurricane Matthew stopped falling in Port-au-Prince, the capital of Haiti.

The women were recipients of assistance by SAKALA, an MCC partner in Cité Soleil, one of the poorest parts of Port-au-Prince. MCC delivered relief kits full of hygiene supplies, blankets, water- purification tablets and food to families there.

The visit was just the beginning of MCC’s response to the damage caused by Hurricane Matthew in Haiti. Many emergency supplies were already in place, enabling MCC to respond quickly with its partner organizations.

Sitting right at sea level, this vulnerable neighborhood, where most people were already struggling to get by each day, suffered the effects of high winds, rain and a storm surge.

“We know that these first supplies are a stopgap and in no way address the long-term challenges that this community and others in Haiti are facing right now,” said Rebecca Shetler Fast. “But it is important to us to be present in these communities right away, to bear witness to the effects of the hurricane and to provide what immediate assistance we can.” 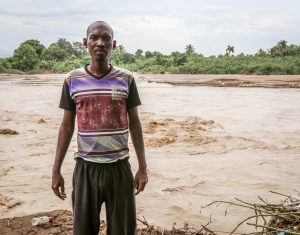 Hudson Reny-Jean stand beside the River Gris that washed away homes in the Voudray community of Cite Soleil. The flooding also affected the safety of drinking water, making the water purification tablets that MCC provided a blessing, according to Reny-Jean.“He held these 3-cent tablets in his hand and just kept repeating, ‘These are such a blessing, these are such a blessing for our community.” (MCC photo/Paul Shetler Fast)

Other MCC emergency distributions in Port-au-Prince took place on Thursday, and on Friday MCC partners, staff and local government officials planned to carry blankets and relief kits to 220 families living in remote areas of the mountains of the Artibonite Department, 2½ hours northwest of the capital. An MCC disaster assessment team also is at work in the Artibonite, where high winds, heavy rain and flooding damaged houses, killed livestock and destroyed crops.

The flooding raises concerns about increased incidents of cholera, a disease carried by contaminated water that typically peaks in the fall rainy season. It has already infected more than 800,000 people and killed an estimated 10,000 people since cholera came to Haiti in 2010.

In spite of the hurricane damage, MCC’s 20 years of reforestation work in the mountains around the town of Desarmes in the Artibonite may have saved lives, according to Monfleuri Previlman, a municipal leader for agroforestry coordination.

“Before this work, a hurricane this size would have resulted in large landslides and floods on the plain, and many, many lives lost,” Previlman said. “This is the type of durable disaster prevention that really works; lives were saved because of it.”

MCC’s response in the Artibonite and Port-au-Prince will continue to unfold in the coming days and weeks as the impact of the storm becomes clearer. Haiti’s interior ministry announced Friday morning that the death toll had reached 500 people, the majority in southwest part of the country. 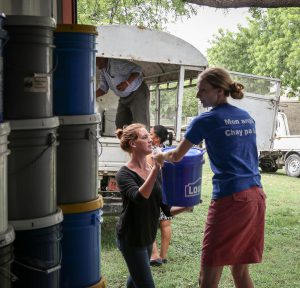 Rebecca Shetler Fast (in blue), MCC country representative, and Elise Quiring (in black), Connecting Peoples coordinator, help to load relief kits from storage onto the truck that will carry the kits to MCC’s partner SAKALA in Cité Soleil, a neighborhood in Port-au-Prince. Twenty families are sheltering in SAKALA’s community center after flash flooding from Hurricane Matthew forced them from their homes. Some of the families’ homes were completely washed away in the storm. MCC Haiti provided relief kits, blankets, water purification and food to them. (MCC photo/Paul Shetler Fast)

While the longer-term response to Hurricane Matthew’s catastrophe is still developing, immediate help is appreciated by those whose lives have been turned upside down.

Paul Shetler Fast said he was struck by the importance of water purification tablets to Hudson Reny-Jean of Cité Soleil, where well water is contaminated by the flooding.

Find out more about MCC’s response in Haiti at mcccanada.ca/hurricane-matthew.