What's New
A FOCUS on Mission
Must Patience Be So Slow?
Harold Jantz: A Heart for the Mennonite Story
Lorlie Barkman: A Life of Creative Engagement
Last Days, First Days
Women in Ministry: Bertha Dyck
January Moment in Prayer “Holy Spirit—Fill Us!”
The Church as the Patient Body of Christ
Advent: Making Much of Jesus: Christmas Day
Advent: Making Much of Jesus: Fourth Advent
Home News Despite violence, MCC work in Egypt continues 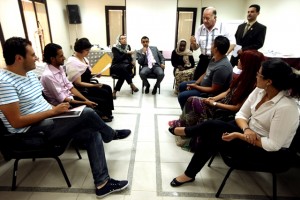 Participants from all over the Middle East participated in this peacebuilding training, offered last September by the Coptic Evangelical Organization of Social Services (CEOSS), an MCC partner in Egypt.
MCC photo by Silas Crews

Mennonite Central Committee (MCC) continues to support its church partners in Egypt with their development projects and health and educational programs, in spite of church partners being hampered by political violence.

Violence in Egypt escalated on Aug. 14 when Egypt’s armed forces violently cleared sit-ins by supporters of ousted President Mohammed Morsi. Hundreds of protestors were among more than 500 people killed that day, according to numerous media reports.

Morsi, who was ousted by the military in early July during a large, popular uprising against the president, is widely supported by the Muslim Brotherhood, an Islamist political and religious group.

As the government continues its crackdown on the Muslim Brotherhood, Morsi supporters have destroyed police stations and government buildings. In addition, they have burned or damaged more than 40 churches and as many as 30 other Christian-related facilities because of many Christians’ opposition to Morsi’s leadership, according to church and media reports.

MCC’s church partners – Coptic Orthodox, Coptic Evangelical, and Anglican churches – have all suffered losses or damage to buildings, and in some cases, injuries to people. Most of MCC’s international workers have temporarily left the country for security reasons.

Nevertheless, in many places within Egypt, the service arms of the churches are able to continue working in communities in need of basic infrastructure, such as clean water. They continue to offer health education and to work in schools, including those supported by MCC’s Global Family education program.

Four MCC Egyptian staff members continue to work with churches to support MCC programming as they are able.

“Those churches and communities that haven’t been attacked are continuing to carry out their work and those that have been attacked will try as soon as possible to help their communities,” said Amela Puljek-Shank, area director for Europe and the Middle East. “MCC funds are being used where they need to be used – with vulnerable people.”

MCC is in ongoing conversation with partners to learn more about how they have been affected by the recent violence, to assess the situation, and to eventually determine when it is safe for MCC’s international workers to return, said Puljek-Shank.

For many years, MCC’s partners have undergirded their work in education and development with efforts to build understanding and cooperation among Muslims and Christians. For example, for the past five years, the Coptic Orthodox Church has brought Muslims and Christians together to bring clean drinking water to homes in 30 Lower Egypt communities.

In two areas of Upper Egypt where the Coptic Orthodox Church has invested many years of work to build peace between Muslims and Christians, no Coptic churches or Christians have been harmed at this point, said Judith Snowdon. Judith and Tom Snowdon are MCC representatives in Egypt.

In one of those communities, she said, the Muslim Brotherhood surrounded the home of a Coptic bishop one night, causing fear to those inside, but no harm was done. The next day, other Muslims in the community joined Christians, helping them to protect the church, the bishop’s house, and related buildings.

“This happened in many communities,” Snowdon said. “Muslims came to the defense of Christians and surrounded their churches.”

Christians in Egypt are “very conscious of Christ’s call to be peacemakers and to be nonviolent,” said Tom Snowdon. “It is why they are such easy targets. They tend not to fight back, at least not very much, and they get scapegoated.”

At the same time they do stand up for their rights as citizens and their leadership advises them to do so, Snowdon said. “The Christians always want the message to go out that they want the rights of all citizens to be honored.”