What's New
Abortion, the image of God, and faithful witness...
Choosing motherhood: The sacrifice of honouring life
MWC Assembly small but full of joy
Bad back doesn’t hold back MDS volunteer
Transition in CCMBC National Faith and Life Leadership
Leading through the trauma of covid: Part three...
The church distracted: When the main thing is...
Remote wilderness rescue turns into service with MDS...
How open is your mind?
Following Jesus together across barriers
Home News Daughter’s death kindles mother’s passion to learn and serve 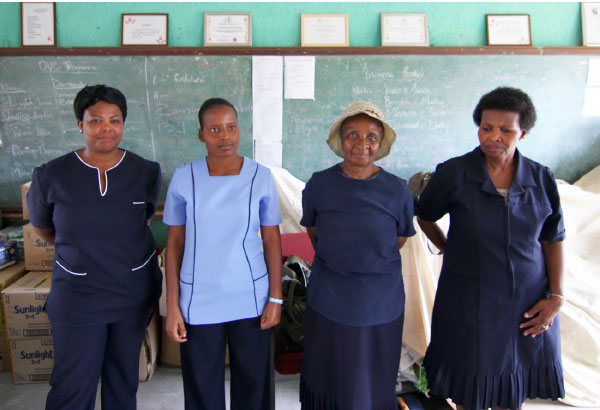 Elsie Sithebe knew nothing about the virus that killed her daughter. But the pain kindled a fierce determination to learn more and tell others so they wouldn’t have to suffer as she had.

“I lost my daughter to HIV/AIDS,” said Sithebe. “After that, I found that I didn’t know anything about it. I didn’t know what to do when somebody is sick. I was just scared of infection. I said to myself, ‘I still have other children behind, so how can I help them?’”

Sithebe’s daughter died in 2000. At the time, information about HIV was scarce, despite its increasing prevalence in South Africa. After long workdays, Sithebe would spend the rest of her day going door-to-door, educating people about the virus.

Local hospitals were seeing an influx of patients, resulting in less than adequate treatment. Patients were being discharged long before they could get better. There was an obvious need.

Twelve years later, Sithebe is the project manager of Helping Hand, a community-based organization in Thembisa, a township of Johannesburg. Helping Hand focuses on intervention and treatment for HIV/AIDS and care for orphans and vulnerable children. She oversees the care and treatment of 54 terminally ill patients and 310 children.

When it began in 2001, the clinic was based in a household garage and had six workers and 15 HIV-positive patients. The most basic nursing care was provided both in the garage and through home-based care – washing, distribution of medication, and disease information.

With mentoring from Unsung Heroes, a partner organization of Mennonite Central Committee (MCC), Helping Hand has developed into a full clinic down the road from the garage, with more than 25 staff.

The ever-growing patient list and number of children requiring after-school care results in some challenges for Helping Hand. Funding issues result in high staff turnover and the small workspace limits the reach of Helping Hand’s programs. An inadequate kitchen inhibits the production of food parcels for home-based care patients. The after-school program is held outdoors, and a rainy day means the kids are sent home.

Despite the challenges, staff remain optimistic. They can see the impact of their work, and the suffering of people like Sithebe is being reduced in the local community.

—Lucas Klassen is serving as an MCC intern in southern Africa