What's New
Through the conflict, life carries on in Ukraine
A FOCUS on Mission
Must Patience Be So Slow?
Harold Jantz: A Heart for the Mennonite Story
Lorlie Barkman: A Life of Creative Engagement
Last Days, First Days
Women in Ministry: Bertha Dyck
January Moment in Prayer “Holy Spirit—Fill Us!”
The Church as the Patient Body of Christ
Advent: Making Much of Jesus: Christmas Day
Home News Critical food situation in South Sudan

Without Urgent Help, Children Will Suffer the Most in South Sudan 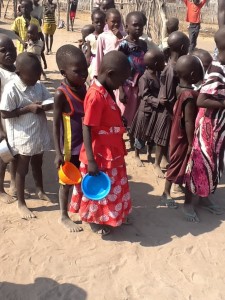 Children wait in line for a food distribution at an Internally Displaced Persons camp in Awerial County carried out by the Sudanese Relief and Development Agency (SUDRA), supported by MCC.
Photo by Simon Mikanipare

That was the blunt message hammered home by the United Nations during a recent appeal for increased funding to help people affected by South Sudan’s ongoing violence.

In South Sudan, thousands of people have been killed by a violent conflict that swept the country back in December 2013. An estimated 400,000 have fled the country, and an additional one million are displaced within the country.

“When people are displaced, they aren’t at home planting the crops they need to survive, and the consequences may be devastating,” says Canadian Foodgrains Bank International Programs Director Grant Hillier.

Nearly all of South Sudan’s population are small-scale farmers who depend on being able to grow a crop to survive. Not being able to plant because of violent conflict is having a severe impact on families struggling to survive, an impact that, unless something is done, will only increase.

Children whose growing bodies are deprived of proper food and nutrition, such as the children living in over-crowded relief camps, don’t have the strength to fight off such disease and bacteria.

“A lack of food, combined with the cholera and unsanitary conditions of many camps for internally displaced people, means that children are the ones who suffer the most,” adds Hillier.

The Foodgrains Bank, through its members – including MCC – is responding.

Find out more at http://foodgrainsbank.ca/south_sudan_crisis_appeal.aspx and below. 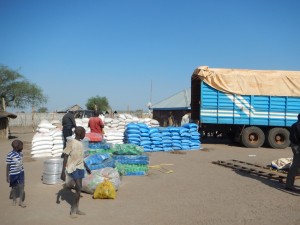 Some 70,000 of conflict-displaced people in South Sudan sought refuge at an Internally Displaced Persons camp in Awerial County, where they could find people who spoke the same language.

But adjustment to life in this new community is not easy. Many need food and shelter, and when thousands of people are suddenly dislocated and arrive under strained circumstances, it’s easy for conflicts to arise.

A food distribution project by the Sudanese Relief and Development Agency (SUDRA), supported by Mennonite Central Committee (MCC), met the basic need for food and also helped provide a place of stability where people could begin to create community.

“The MCC-SUDRA feeding program has restored the hopes of the community, brought a good number of pastors together and increased reconciliation as people meet and interact together,” says Andrew Biar, a supervisor at one of the feeding centres.

The project provided two months of food for 7,539 displaced children under five in Awerial County from mid-February to mid-April. Because food was distributed primarily at church compounds, it encouraged people to join church activities and meet each other.

“The feeding programs provided people with a place to gather and talk, and learn first-hand that in settings marked by common hardships, cross-cultural, religious and linguistic differences can turn out to be no more important than the differences that exist among individual human beings,” says Brendan Tuttle, MCC’s representative for South Sudan and Sudan.

Since conflict in the country erupted again in December 2013, MCC has allocated more than $1.1 million in funding and resources, such as relief kits and canned meat, for displaced South Sudanese people both inside the country and in Kenya and Ethiopia.

In addition to the food distribution in Awerial, MCC is supporting the distribution of food baskets or vouchers to more than 21,000 displaced people in Budi and Mundri Counties in South Sudan through its account at the Canadian Foodgrains Bank. MCC is also supporting a project with Lutheran World Federation to provide supplementary food, such as fruit, to children, new and expecting mothers, seniors and people with disabilities or illness in Kakuma Refugee Camp in Kenya. And refugees in Gambella, Ethiopia, will receive MCC relief, hygiene and school kits as well as blankets and canned meat.

Beyond meeting basic needs, MCC is continuing to support education, peacebuilding and agriculture projects in South Sudan. This includes funding two training sessions on dealing with trauma for 80 women and youth church leaders, and support for a similar program for South Sudanese refugees in Kenya.

And in Sudan, MCC is starting a three-year program providing meals at school for children, some displaced by conflict in South Sudan. The meals increase students’ attendance and ability to focus.

“Emergency relief is necessary,” says Tuttle, “but we have also tried to ensure that our longer-term projects continue and embody the kind of world that we hope to live in – one where discussions about peace, schooling, libraries and farms have a useful place.”

View this story online at http://mcccanada.ca/stories/relief-relationships-south-sudan