What's New
Through the conflict, life carries on in Ukraine
A FOCUS on Mission
Must Patience Be So Slow?
Harold Jantz: A Heart for the Mennonite Story
Lorlie Barkman: A Life of Creative Engagement
Last Days, First Days
Women in Ministry: Bertha Dyck
January Moment in Prayer “Holy Spirit—Fill Us!”
The Church as the Patient Body of Christ
Advent: Making Much of Jesus: Christmas Day
Home News Clean water strengthens Haiti town 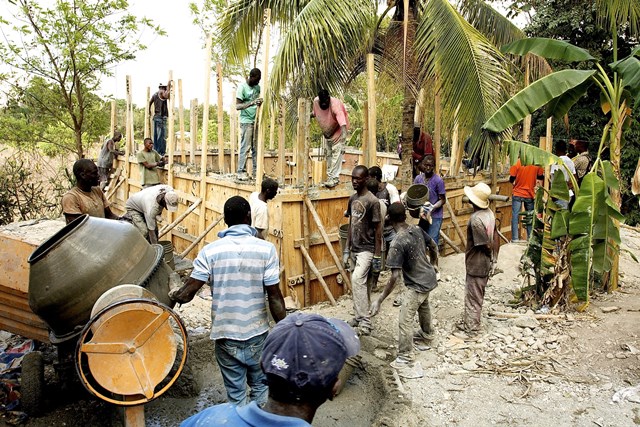 Haitian workers build a new reservoir to hold water from one of the three mountain springs that provides water to the town of Desarmes. Water from the reservoir will flow into pipes that will deliver reliable, drinkable water to households and public kiosks in the area. PHOTO: Josh Steckley

Three springs in the mountains around Desarmes, Haiti, supply abundant water for the 2,002 families who live in or near the small town. But until recently that didn’t mean everyone had easy or equitable access to that water.

People who lived nearer to the springs could count on water, but people in the valley couldn’t. Those with more money or with connections to the local water committees were more likely to get water at home than those without money or connections.

Bucket by bucket, people would spend a lot of time each day carrying water for cooking, washing dishes, bathing and drinking – both for themselves and their livestock. Only about 10 per cent of residents had pipes to bring water into their houses, and about half of those households often went without because the system didn’t work properly.

But with the completion of a Mennonite Central Committee project in December 2013, water is now flowing to most households and 36 public water kiosks, says Josh Steckley a former MCC worker in Haiti who oversaw the development and implementation.

Available and reliable water will save people time and allow them to establish gardens which weren’t sustainable before. The water is also more drinkable than the canal or river water that some people were using, especially important in an area that experienced a cholera outbreak in 2010.

“Now you can feel the difference,” says Emmanuel Fleurine, an MCC staff member from Port-au-Prince who visited Desarmes before and after the water project. “Before you could see people bathing themselves or washing their clothes in very brown water,” he says. “Now clean water is flowing from the faucets.”

After the January 2010 earthquake MCC worked to strengthen the community of Desarmes, where there was already a thriving reforestation program, through a cash-for-work program and support for the Desarmes Vocational School. Then MCC, with the encouragement of the community, decided to address the water system.

The water project improved the uncoordinated network of pipes, reservoirs and public water access areas and established a new reservoir along with systems to control the flow and purification of water.

The most critical part, however, was working with residents, water committees and the Haitian water authority because the inequitable distribution was already a source of conflict, says Steckley.

MCC’s past work in the area gave staff credibility to address the water situation. MCC’s Haitian staff used conflict resolution skills from the reforestation program in long meetings and discussions until a plan was agreed upon.

Since completion, “The project more than doubled the amount of available water coming to Desarmes, but because of a complete reorganization of the system, it is more equally distributed and has increased people’s access by as much as seven times, depending on where they live,” Steckley says. The final stages of the project will involve the installation of chlorination systems as well as the government required fencing and erosion control 1,000 square meters around the springs.