What's New
Multiply September Ukraine Updates
Volunteers in B.C. honour Leamington woman tragically killed...
Delete or not to delete, that is the...
Believers bring water for drought baptism
Encouragement to those in the arena
Keeping attention and making an impact: A few...
Open hands to reconciliation
From the editor
Approaching truth and reconciliation with love in our...
MB Seminary offers new MA in Transformational Leadership...
Home Life & Faithfeature articles Charting a course

A voyage into evangelical Anabaptism, past and present

With influences from two strong Christian streams surging within our denomination, why do some MBs seem to flow more with the Anabaptist stream? 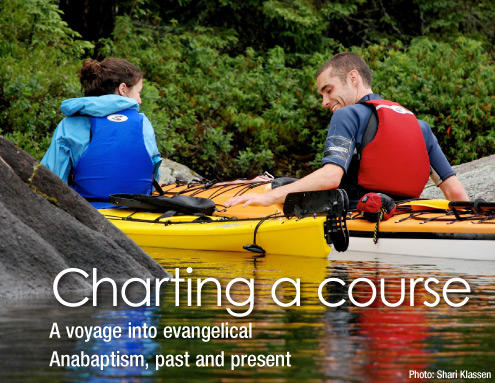 The reasons for claiming an Anabaptist identity have varied over time: in Russia, early Mennonite Brethren leaders were quick to claim continuity with the Mennonite-Anabaptist tradition, at least in part, to insure they didn’t jeopardize their legal status as Mennonites. In North America, the adoption of an Anabaptist identity was utilized by some to differentiate their unique theological ethos from a smorgasbord of Protestant options.

Several important denominational history books were published during the 1970s, including a comprehensive volume (A History of the Mennonite Brethren Church) by John A. Toews, a man with an uncompromising commitment to promoting an Anabaptist vision, which he thought was a necessary antidote for the influence of American evangelicalism.

Toews’ volume came at a crucial time in the MB search for a new historical and theological identity. He noted the influence of Lutheran Pietists, German Baptists, and evangelical Protestantism within the Mennonite Brethren story, but considered these to be “external” forces that reinforced a tendency toward indiscriminate “exposure to every wind of doctrine from various theological schools of thought.”

In an attempt to stabilize the precarious state of denominational identity, he argued that Mennonite Brethren are best understood as the true “spiritual heirs of the early Anabaptists.”

This assertion wasn’t fair to other Mennonites, and wasn’t historically accurate, but the emphasis on an Anabaptist identity was an attempt to address a growing historical amnesia, and the polarization between those who wanted a closer alignment with the National Association of Evangelicals, the Billy Graham Evangelistic Association, and Campus Crusade for Christ, and those whose allegiances ran more towards inter-Mennonite alliances.

Yet, some people now seem hesitant to claim an Anabaptist label.

Some perceive a specifically Anabaptist theology as being intentionally anti-evangelical; some are rightly suspicious of the controversial theological trajectories presented by Mennonite theologians such as J. Denny Weaver.

However, a spate of recent theological literature in non-Mennonite circles has begun to interact with contemporary Anabaptist theology.

Promising, but still underutilized by Canadian MBs, are contemporary Christian expressions that explore ways to live out Anabaptist ideals without using the Mennonite, Hutterite, or Amish wrappings with which they’re usually associated. The Anabaptist tradition is being mined by other Christians for theological resources that might be useful in a cultural milieu shaped by postmodernism.

Examples include the Mustard Seed House Community in Seattle, an intergenerational, neo-monastic, intentional Christian community that has been promoted by people such as Tom and Christine Sine. In Britain and Ireland, the Anabaptist Network, a loose-knit network of individuals and churches, is encouraging Christians from a wide variety of denominations to add a more distinct Anabaptist accent to their understanding of faith. The work of Stuart Murray, a person with a PhD in Anabaptist hermeneutics and years of experience in urban mission and church planting, has been helpful in bring this network to the public’s attention.

What about the evangelical stream? There are many MBs who happily identify themselves as Canadian evangelicals.

This shouldn’t come as a surprise. The early founders of the MB church in Russia intentionally appropriated some theological emphases and practices from several evangelical groups (Lutheran Pietists and German Baptists) in order to create a new way of being Mennonite. When the Mennonite Brethren moved to North America, it didn’t take them long to discover they had a natural compatibility with the broader evangelical movement.

The decade of the 1960s marked an important watershed not only for the Mennonite Brethren, but also for evangelical Protestants in Canada in general. As evangelical Protestants became more affluent and better educated, they began to feel less like estranged outsiders in Canadian culture, and more like cultural insiders with a sense of responsibility for the character of Canadian society.

As the different denominational groups that made up the evangelical Protestant mosaic emerged from their respective enclaves, they began to discover one another, creating what John G. Stackhouse, Jr. describes as, “a mutually supportive network of interlocking institutions, organizations and individuals” that has characterized evangelical Protestantism in Canada since 1960. The Mennonite Brethren contributed more than any other Mennonite group in Canada toward the formation of this evangelical network.

In 1973, the Mennonite Brethren formally became members of the Evangelical Fellowship of Canada, a move that signalled both their willingness to identify and work with other evangelical Protestants, and their growing interest in tackling social issues in a more public, and political, way. The entry into the consortium of seminaries at Trinity Western University on the part of Mennonite Brethren Biblical Seminary in 1999, rather than establish their own stand-alone seminary campus in Canada, again indicated MB willingness to collaborate in common cause with evangelical denominations.

One would be hard pressed to find an evangelical Protestant institution and organization in Canada that has not received significant support from the Mennonite Brethren.

In comparison with their counterparts in the United States, the Mennonite Brethren in Canada have played a much more prominent role in the development and life of evangelical Protestant institutions and organizations. This is due, in part, to the fact that Canadian MBs make up a larger proportion of Protestant demographics (about 4 percent) than in the U.S. It may also be that Mennonite Brethren have found evangelical Protestants in Canada to be less nationalistic and militaristic, more theologically diverse, and therefore more compatible compatriots.

But even within this large, collaborative evangelical circle, there seems to be tension.

Pietism and Puritanism are the two main antecedents of the revivals that birthed and shaped modern evangelical Christianity. These two streams – the former somewhat more individual, experiential, and pragmatic in its ethos; the latter somewhat more intentionally public in its focus, and more doctrinal – flowed together to form evangelical Protestantism, a movement convinced, as historian Mark Noll describes, that “God could actually, actively and almost tangibly transform repentant sinners who put their trust in him.”

According to Roger Olson, the mingling of these two streams created an “unstable compound” that has, despite common convictions and commitments, generated tension and turmoil throughout the history of the movement. The heirs of these two antecedent movements continue to understand the nature of evangelicalism in somewhat different ways, with some even questioning the ongoing usefulness of the evangelical label.

Some individuals, such as Daryl Hart, claim that the evangelical label has become meaningless since being co-opted by “neo-evangelicals” to encompass a broad range of “conservative” Christians. According to Hart, a staunch Presbyterian, there isn’t enough creedal conformity within the movement; not all groups under the big evangelical umbrella manifest what he considers to be the three true marks of the church: right preaching of the Word of God, correct administration of the sacraments, and discipline that upholds the first two.

Evangelical theologians Don A. Carson and David Wells have also expressed their displeasure about the doctrinal pluralism among evangelicals. This “Puritan” undercurrent has resulted in the formation of a variety of new networks intent on reinforcing doctrinal precision (read conformity) among evangelicals, and generally favour a narrowing of the definition of evangelical (e.g., Alliance of Confessing Evangelicals, The Gospel Coalition, and Together for the Gospel). These networks are all Reformed in their theological orientation.

Understanding the tensions created by these undercurrents within North American evangelical Protestantism is essential for understanding current discussions within the MB conference. Overall, Mennonite Brethren have a greater tolerance for latitude on some doctrinal issues than evangelicals who are more influenced by their
Puritan roots.

Is unity possible within the MB denomination?

Many within the larger evangelical Protestant movement wonder whether it will be possible to maintain a sense of unity amid ever increasing diversity. Not surprisingly, this same question is being asked within the MB world. In 1991, Walter Unger prophetically called the denomination to “a unity of confession and mission” that’s both evangelical and Anabaptist. It’s a mistake to see the mixture of Anabaptist and evangelical influences that came together to form an MB identity as two opposing polarities: the selected aspects of both traditions need to be seen as the necessary ingredients for what it means to be MB.

Citing evangelical theologian Donald Bloesch, Unger concluded his address, “There is hope not only for a unified evangelicalism but for the unity of the church at large ‘if each recognizes that the one foundation for the faith is not a set of beliefs but a living Person who speaks anew in every age through the Bible and the church’s commentary on Scripture.’”

–This piece is excerpted from Bruce Guenther’s article, “Reflections on Mennonite Brethren Evangelical Anabaptist Identity” in Renewing Identity and Mission: Mennonite Brethren Reflections After 150 Years (Kindred Productions, 2011), and is used by permission. Bruce currently serves as interim president of MBBS Canada and is a member of Bakerview MB Church, Abbotsford, B.C.