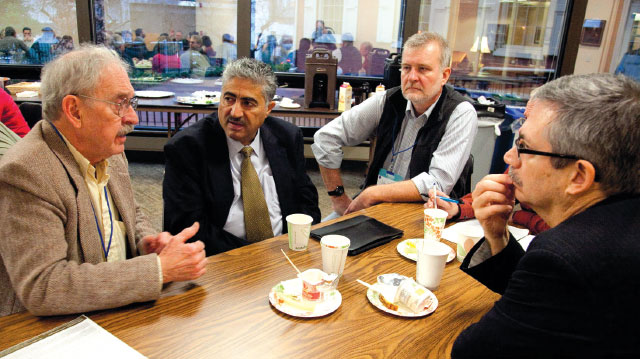 Shireen Awwad Hilal, a Palestinian Christian, has hope for Israel-Palestine.

“Few people view our situation with hope, and the concept of reconciliation is controversial,” she said at the Impact Holy Land conference Dec. 4–6. “Let us commit to see hope where others see hopelessness.”

Hilal teaches and is assistant dean of students at Bethlehem Bible College, a partner of Mennonite Central Committee. She believes in the power of relationships, which she sees in her role as the women’s minister for Musalaha (Reconciliation), an organization developing relationships between Palestinian and Israeli believers.

“When you know names, you have a friendship,” she said. “You begin to see what you have in common with a stranger.”

The conference, organized by Evangelicals for Social Action, was meant to open conversation around differing perspectives on Israel-Palestine. It was held at the Friends Center in downtown Philadelphia.

About 250 attendees came from a variety of perspectives, including more than 50 Anabaptists. MCC U.S. awarded 50 scholarships for Anabaptists to attend.

Hilal and the 18 other presenters told their stories of seeking peace in Israel-Palestine and reminded attendees of the responsibility U.S. Christians have to promote change there.

Impact Holy Land came on the heels of Christ at the Checkpoint conferences held in Palestine in 2010 and 2012 to allow conversation between evangelical Christians and Messianic Jews.

MCC was attracted to the conference because of the diversity of speakers. It enlisted the help of Mennonite Church USA – particularly the Peace and Justice Support Network, part of both MC USA and Mennonite Mission Network – to recruit pastors and leaders to the conference from a range of backgrounds and perspectives.

“We think this is a really critical issue for the church in the U.S. and especially Anabaptists,” he said. “We know a lot of pastors go to the Middle East and don’t always get a broad scope of the issues there, and the conference is one way for us to think more holistically about the challenges facing the Jewish and Palestinian communities and us as Christians.”

Jason Boone, coordinating minister of the Peace and Justice Support Network, attended the conference and led the meeting.

“The conference aligns with a lot of what we’re working on in Israel-Palestine and the [MC USA] Purposeful Plan,” he said.

In 2009, Palestinian Christians published the Palestine Kairos document asking for support from Christians around the world. In 2011, MC USA wrote a letter of response committing “to study Scripture together within our own church and with you.”

At the meeting, MC USA and MCC leaders described what their organizations are planning as part of that response.

“We’re trying to articulate that this is sort of the tinderbox for much of the conflict in the world,” Boone said. “As peacemakers, if we want to see peace and shalom for all, then we have to look at the Middle East.”

Presenter Shane Claiborne, founder of the intentional community The Simple Way, also said the Middle East can’t be ignored in seeking peace for all.

“We’ve got to do something,” he said, though confronting injustice isn’t always convenient. “Injustice anywhere should interrupt our comfort and our routines.”

Byler heard many people say this was their first time meeting Palestinian Christians.

“I think it’s an afterthought to most of MCC’s constituency church members that there are actually Christians in Palestine,” he said. “We don’t think about how we can support the church there. I’m hoping this conference allows us to give voice to the Christians that are in Palestine.”

One such Palestinian Christian born in Israel was Musalaha’s founder Salim Munayer. He talked about the transformative power of relationships.

“How can we say that we love [the] God that we don’t see, but we hate the neighbor that we do see, our brother and sister?” he asked.

Palestinian Christian spoke alongside Israeli Christians, Israeli and Palestinian Messianic Jews, an Ethiopian Messianic Jew, a branch leader of Jews for Jesus, as well as American pastors, rabbis and scholars. They shared their own journey understanding the conflict and expressed views on what, especially Americans, could do next.

Closing speaker Tony Campolo, sociology professor emeritus at Eastern University, said: “If we don’t as Christians lead the way to peace in this very, very tense situation, the ramifications in geopolitical terms are awesome to think about.”

Rachelle Lyndaker Schlabach, who directs MCC’s Washington office and monitors policy regarding the Middle East, was one of 10 MCC staff in attendance. She said the church needs to respond to its brothers and sisters in Israel-Palestine.

“One way is definitely political advocacy, because Israel is the largest recipient of U.S. military assistance,” she said. “So it’s important for us as taxpayers to be aware of how our dollars are being spent.”

Dan Bergen, MCC Palestine and Israel representative, said MCC is one of the longest-standing relief organizations working in Israel-Palestine. Its personnel have seen how both sides suffer.

“I hope the conversation continues, and I hope from MCC’s perspective some things can come out of the conversation about what role can the church play in this situation,” said the Canadian MCC worker.

Russel Jensen, pastor of Belmont Neighborhood Fellowship in Elkhart, Ind., is prepared to do that. He and his wife, Denise, met while serving in Israel.

“Our experience began in the Jewish setting but has broadened over the years to give us connections on both sides,” he said. “We just have a real hope that the church, as it seeks to educate itself on the situation, will be open to hearing both sides.”

Many presenters echoed a similar sentiment.

Archbishop Elias Chacour, a three-time Nobel Peace Prize nominee, was evicted from his land when it was given to Israel by the U.N. in 1947. He’s spent more than 30 years working to build bridges between faith traditions in Israel-Palestine.

—Kelli Yoder is assistant editor/web editor for the Mennonite World Review, where this article first appeared.