What's New
A FOCUS on Mission
Must Patience Be So Slow?
Harold Jantz: A Heart for the Mennonite Story
Lorlie Barkman: A Life of Creative Engagement
Last Days, First Days
Women in Ministry: Bertha Dyck
January Moment in Prayer “Holy Spirit—Fill Us!”
The Church as the Patient Body of Christ
Advent: Making Much of Jesus: Christmas Day
Advent: Making Much of Jesus: Fourth Advent
Home Arts & Culture Seeking consensus on controversial issues 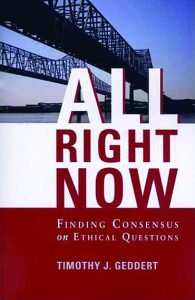 Tim Geddert, professor of New Testament at MB Biblical Seminary in Fresno, attempts the difficult task of drawing together biblical interpretation, the nature of the church, and ethics. All Right Now emerged out of Geddert’s teaching in Germany, where the book was first published in 2004. Now published in English, it continues to have in mind a broad Christian audience who may not necessarily share the convictions often represented among Mennonite Brethren.

All Right Now is divided into three sections: Basics, Examples, and Attitudes. In the first section, Geddert introduces the three themes of the book by describing his approach to interpreting Scripture, examining the implications of Matthew 18 for accountability within the church community, and finally, by summarizing the basic principles underlying a biblical ethic.

The main part of the book explores how to interpret the Bible in relation to five controversial issues facing the church: love for enemies, sexuality, divorce and remarriage, homosexuality, and money and possessions.

In the last section Geddert seeks to challenge readers’ attitudes about ethical issues through three biblical stories: a willingness to pursue unity (Acts 15); the priority of relationships (Luke 15); and the power of grace (John 8).

h, and does not represent a full-length treatment of any of the controversial issues examined in the book. Geddert’s goal is not to provide definitive answers to the issues he addresses, but to help churches take their own “time and culture seriously” and “remain true to Scripture in applying its teaching to our world.”

Geddert certainly doesn’t shy away from stating his own personal conclusions, such as “God never intended sexual relations outside the marriage bond,” and “sexual relationships between persons of the same sex do not correspond to God’s intention for human sexuality.” Yet Geddert’s greater concern is to illustrate the process by which the Scriptures are read within the church and to make suggestions for healthy conversation when Christians disagree.

Geddert seeks to face the reality of where Christians actually stand on issues, not only by what they say but also in their actions – which may be two different things. He acknowledges that some Christians are willing to kill their enemies, engage in sexual relations before marriage, terminate their marriages, admit homosexual attraction, and focus their energy on acquiring wealth. At the heart of All Right Now is a call for the church to move beyond timidity or indifference and to talk together “about areas in our lives where we are finding discipleship difficult.”

While Geddert models his concern for keeping the Scriptures central throughout the book, he is unwilling simply to quote chapter and verse. Rather he calls the church to think biblically by taking seriously the Bible as a whole and discerning the direction in which Scripture points. At times, however, his explanations regarding the lack of clarity of some biblical texts used to support a particular position are not convincing.
Geddert’s strategy for addressing each issue varies from chapter to chapter, so rather than a coherent model for interpreting Scripture, the book reads more like a collection of different approaches. This is no “cookie cutter” approach to the application of biblical texts, in part because of the complex ways the Scriptures speak to these controversial issues. The varied strategies also reflect sensitivity to the particular attitudes and questions diverse Christians bring to their reading of Scripture.

Nevertheless, Geddert does not adequately engage in an assessment of the values and assumptions underlying differing convictions among North American Christians. Why are many evangelical Anabaptists willing to support Christian participation in the military? Why are attitudes toward sexuality within the church changing? Why are the effects of consumerism so pervasive? Our ability and willingness to listen to what the Bible says is affected by much more than our capability to understand what the text means.

Geddert challenges legalistic tendencies within the church by emphasizing the priority of relationships and the riskiness of the grace exemplified by Jesus. But what is missing is a healthy conversation about the nature of truth. It seems that North American

Christians are either inhibited from appealing to truth for fear of offending people or they harshly proclaim truth with little discernable love for others. How can our ethical deliberations reflect both grace and truth?

All Right Now is best seen as a primer for encouraging conversation within congregations. Based on Jesus’ teaching in Matthew 18 and the early church’s example in Acts 15, Geddert assumes that God’s Spirit will guide believers toward consensus as they gather around the Word.

The question remains whether congregations are actually willing to engage in conversation regarding the controversial issues facing the church.

is engaged in global training on behalf of Multiply and MB Seminary.

The Ethics of Evangelism: A Philosophical Defense of...