What's New
“Any chance you might be expecting a goldfish?”
Abortion, the image of God, and faithful witness...
Choosing motherhood: The sacrifice of honouring life
MWC Assembly small but full of joy
Bad back doesn’t hold back MDS volunteer
Transition in CCMBC National Faith and Life Leadership
Leading through the trauma of covid: Part three...
The church distracted: When the main thing is...
Remote wilderness rescue turns into service with MDS...
How open is your mind?
Home News After storm, MCC relief 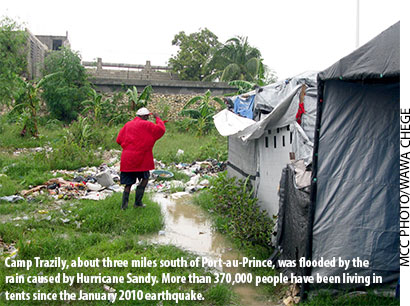 Mennonite Central Committee is responding to the devastation left by Hurricane Sandy when it swept through Haiti in late October.

Parts of Haiti received as much as 20 inches (508 mm) of rain, flooding tent camps and killing 54 people according to reports from the Haitian government. Loss to livestock, crops and infrastructure are estimated at $104 million.

The impact of Hurricane Sandy, which compounded the effect of Hurricane Isaac in August, was especially destructive because 370,000 people are still living in tent camps since the 2010 earthquake, said Kristen Chege, an MCC worker from Eugene, Ore.

“Whole camps flooded as streams emerged between tents,” she wrote in an Oct. 29 blog entry on undertentshaiti.com. “Shelters fell under the weight of sitting water, dirt floors turned to mud, and precious possessions were ruined. Efforts to raise mattresses off the ground using cinderblocks and to string clothes from wires inside their tent made little difference as the rain poured in through holes in the tent or seeped in below the walls.”

In response, MCC is distributing relief kits, blankets, and canned meat it had positioned in Haiti prior to the hurricane season. These kits will be distributed to 493 families, predominantly located in the southern part of the country. In addition, food rations will be purchased locally to supply those families for a five-week period.

The relief kits, which include soap, toothpaste, laundry detergent, towels, and other hygiene supplies, are a baseline defense against cholera, which spreads through unclean water. The country especially is vulnerable because it doesn’t have proper sanitation and sewage systems.

MCC Haiti will distribute the supplies through one of its long-term partners, Network for the Defense of Human Rights/Réseau National de Défense des Droits Humains, a human rights monitoring and education group.

In addition to responding in Haiti, MCC also is exploring a response in Cuba, where more than 300,000 people have been evacuated, 200,000 homes damaged, and 74,000 acres of crops destroyed.