What's New
Boldly advancing the gospel from our knees
MCC sends food and relief to Cubans in...
Robert Dagenais, pastor of the Sainte-Thérèse church, is...
More donated hay needed to help farmers in...
“God’s time was perfect”
Hope and pray every day
Resilient Leadership: The gift of self care
Project Redemption
Blue Christmas
“Repent, for the kingdom of heaven is near.”
Home News A taste of SALT: first step in “remarkable adventure”

A taste of SALT: first step in “remarkable adventure” 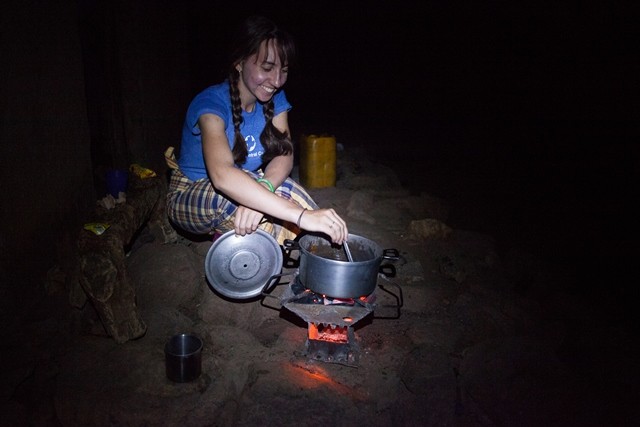 Rebecca Standen prepares her evening meal outside her house in the village of Capinga, near the city of Tete in Mozambique. Standen is an agricultural extensionist with MCC Mozambique. In 2014, she trained and supported community members where new sand dams are built. MCC, in partnership with Christian Council of Mozambique, has built 26 sand dams in the Tete region, between 2008 and 2014. MCC photo by Matthew Sawatzky

Rebecca Standen wears a headlamp to light the way and checks a pot of chima bubbling over the fire outside her tiny house. The porridge-like mixture will be supper – as she ends another day in the village where she lives most of the week.

Standen, 24, is an agricultural extensionist with Mennonite Central Committee (MCC) in Mozambique. She’s providing training and support to community members as they plant gardens and harvest vegetables.

“I never imagined that I would be working overseas with an organization like MCC,” she says. “I never ever thought I would have the courage to leave home.”

Standen is from River of Life MB Church, Riverview, N.B. After graduating with a degree in environmental biology in 2012, she considered postgraduate studies, but couldn’t find a suitable fit. One day, she checked MCC’s website and discovered an opportunity in Cambodia with SALT (Serving and Learning Together). It’s a year-long commitment for people between the ages of 18 and 30, who want to volunteer overseas.

“They were looking for someone who had some experience, but was interested in trying new things,”she says. “I thought, why not?”

Standen accepted the position and quickly found herself in Cambodia demonstrating agricultural techniques to farmers. She loved working with the community and began to realize that this is what God had called her to do.

“You know, it was a one-year term, and that’s not very long once you are there. Halfway through the term, I was already thinking, what am I going to do next?”

The answer was a three-year position with MCC as an agricultural extensionist in Mozambique. By January 2014, she was again working with community members in their gardens – this time as they took advantage of water from sand dams constructed by Christian Council of Mozambique, an MCC partner.

“It feels really good to see people harvest their vegetables,” she says. “This work uses the gifts that I was given, and I like the problem solving, the exploring.”

In one of her blogs, Standen refers to her time with MCC as a “remarkable adventure.” She’s learned a great deal about life in Cambodia and Mozambique, about conservation agriculture and how to work with communities. She has also learned about herself.

“I learned that I was wrong when I thought I could never leave home. And I am so happy that I was,” she says. “I learned that God will provide and help you overcome whatever gaps you think you have.”

In 2015, Standen will move to another position with MCC Mozambique. She will teach agricultural skills at a new high school in Machanga.