What's New
MWC Assembly small but full of joy
Bad back doesn’t hold back MDS volunteer
Transition in CCMBC National Faith and Life Leadership
Leading through the trauma of covid: Part three...
The church distracted: When the main thing is...
Remote wilderness rescue turns into service with MDS...
How open is your mind?
Following Jesus together across barriers
2022 National Faith & Life report to the...
CCMBC 2022 national assembly summary
Home News A safe place to play

A safe place to play 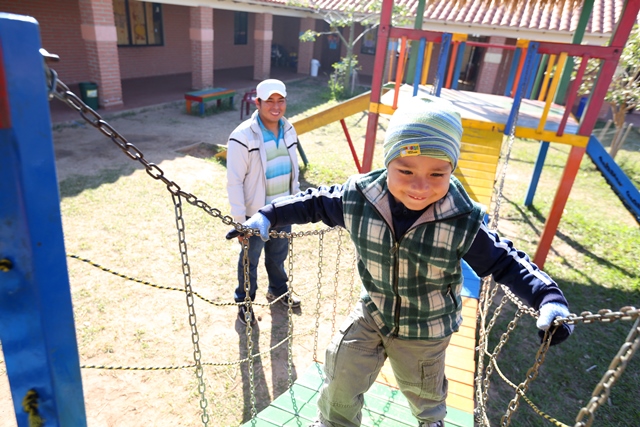 Oscar Yoadel, 4, plays at Guarderia Samuelito, his daycare in Santa Cruz, Bolivia run by the Bolivian Evangelical Mennonite Church, an MCC partner. His father, Oscar Pinto, is a single dad who would not be able to work full-time without the daycare.
MCC photo by Nina Linton

Four-year-old Oscar Yoadel loves the playground at his daycare, Guarderia Samuelito. He runs endlessly back and forth across the brightly-painted suspension bridge. And with a big grin descends the metal slide after his father, Oscar Pinto, climbed with him to the top.

It’s not just the playground he loves. When it’s time for Yoadel to return to his orange-walled classroom, he heads through the door without a glance back at his dad. When he first started attending the daycare, run by the Bolivian Evangelical Mennonite Church in Santa Cruz, Yoadel would cry. “He was very attached to me because I was the person who was taking care of him,” says his dad, “but now he’s very happy.”

Pinto is a single father who leaves his son at the daycare, which receives funding from Mennonite Central Committee’s (MCC) Global Family program. Before he heard about the daycare he would sometimes bring Yoadel to construction sites so he could watch his son while working.

But in the spring of 2013 after the four-year-old was nearly struck by a falling tree at one of the sites, Pinto decided he needed a safer alternative, “After that accident I said there’s no way I could bring him.” Now that he can regularly leave Yoadel at daycare, Pinto has been able to get a steadier job as a taxi driver.

Providing a safe space where single working parents from low-income families can leave their children is the primary goal of Guarderia Samuelito. The church did a survey of the neighbourhood in 2005 and found many kids were left alone while their guardian was working.

For “many of the children, we found out that either they stay home taking care of the youngest ones, or a neighbour was watching them for a couple of hours,” says Yuneth Vargas, director of the daycare.

Most children spend 10 hours at the centre every day, giving their parents enough time to drop them off, work eight hours and pick them up at the end of day. “They become our children; they spend a lot of time with us,” says Vargas.

The daycare also aims to improve the children’s health and prepare them for school. Each class does educational activities like singing and drawing, and staff test each child’s intellectual development three times a year, providing follow-up with a psychologist when needed. The centre also provides snacks and meals and has formed a partnership with a nearby clinic to ensure all kids have their vaccinations.

Pinto says he’s noticed a difference in his son’s behaviour since he started attending the daycare. “He’s a little more well behaved,” Pinto says, “I’m really happy to be able to do something for my boy.”