What's New
Through the conflict, life carries on in Ukraine
A FOCUS on Mission
Must Patience Be So Slow?
Harold Jantz: A Heart for the Mennonite Story
Lorlie Barkman: A Life of Creative Engagement
Last Days, First Days
Women in Ministry: Bertha Dyck
January Moment in Prayer “Holy Spirit—Fill Us!”
The Church as the Patient Body of Christ
Advent: Making Much of Jesus: Christmas Day
Home News A real church wedding [part of Sunday morning worship]

As pastors John Neufeld and Bob Marsch planned The Meeting Place’s (TMP) teaching series on relationships, discussing the way more couples were choosing to live together without making a lifetime commitment, Marsch jokingly suggested, “We should have a Wedding Sunday!”

After a sabbatical, Marsch checked the service schedule, and under Nov. 27, 2011, Neufeld had written: Wedding Sunday, 11:00 am, leader Bob Marsch.

The purpose for Wedding Sunday at this Winnipeg church was to be like Jesus, who “in every encounter offered redemption,” says Marsch. “Even at times when we might think he’d have some right to pass judgment, he doesn’t diminish the truth, but offers a way. As we [Christians] talk about sexuality and relationships, it would be inappropriate for us to speak a challenge if we didn’t offer a way for the faith community to help people move in the right direction.”

To prepare for a preceding sermon in the series, Marsch interviewed co-habiting couples who identified as Christ-followers and “discovered to my surprise that they were not rebelling against the institution of marriage, nor saying it was irrelevant.” Some revealed a lack of finances for the wedding; others, that marriage had never been modelled.

TMP’s challenge to couples was “Don’t let the wedding be about all those details: the venue, the menu,” says Marsch. “Rather let’s place emphasis on the most significant elements of the wedding day – God’s desire to bless this relationship – which will launch you for the future.”

An answer to prayer 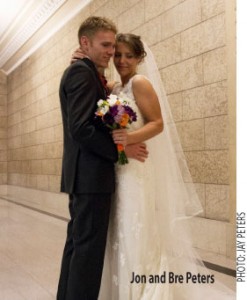 Engaged since May 2011, Jon Peters and Bre Rogers sought out Marsch to discuss how to apply what they’d heard in the relationship sermons. When Marsch shared the opportunity of Wedding Sunday, “it became an answer to prayer.” They had chosen not to share an apartment before the wedding, but Bre’s housing had just fallen through, and they felt like they’d run out of options. Bre believes “Bob got the idea for Wedding Sunday months earlier because God knew this was going to happen to us.”

They’d planned to get married August 2012; suddenly, they were planning a wedding in 29 days! “This gave us the opportunity to have a Christian wedding,” says Bre. After walking down the aisle, they sat down for worship songs, which was “what we needed to put us at ease. It felt like Sunday morning church, but in fancy garb.”

TMP volunteers arranged the whole ceremony and meal, from decorations to jazz trio to 800 cupcakes and 70 heads of lettuce. “Bob’s wife Hilde said, ‘All you have to look after is flowers,’” recalls Bre. Jon and Bre hadn’t planned on a reception due to costs, but treasure the gift of an intimate lunch with family and friends.

“Having 800 people behind us, supporting us, was incredible,” says Bre. “I’ve never had that many hugs in my life. I knew about a quarter of the people who came up to us.” Formerly able to beat the crowd after worship services, Jon and Bre now need an hour to get out. “We’re the celebrity couple in church. People come up and ask, ‘How’s month eight going for you?’ We feel very accountable.” 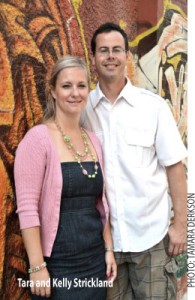 Neufeld included vow renewal in the Nov. 27, 9:00 am service as an opportunity for couples who had found their way through seasons of struggle to acknowledge God’s faithfulness. Two of the three couples who responded were married by a justice of the peace with one or two witnesses; for them to renew their vows in the presence of the faith community made it feel like “this was their real wedding,” says Marsch.

For Kelly and Tara Strickland, married 10 years ago by a JP, faith wasn’t a big part of their relationship until their first daughter was born and they began attending TMP nearly nine years ago. After their relationship “hit rock bottom,” they invited family and friends to a formal renewal ceremony on their fifth anniversary to show that “God was at the centre of our lives, and through good and bad, I’m here to stay,” said Tara. This vow renewal at TMP was “more about celebrating and sharing how marriage isn’t easy, and we should fight for it.”

In addition to the abuse, neglect, and poor modelling they received as children, Tara lives with bipolar disorder, and Kelly battles pornography. Thinking about what was in their video testimony, which would be shown during the renewal service that morning and online, Tara told Kelly, “Do you realize we’re about to tell thousands of people our struggles?”

After the service, as guests shared cupcakes and blessings with each couple, people thanked the Stricklands for normalizing their own marital struggles. “God puts us through things and it’s not to keep them to ourselves,” says Tara. At TMP, Kelly and Tara lead a small group of four newly married couples.

“Divorce is so common. We came to a point on a thin line. I wanted to be able to say to my girls, ‘You don’t have to worry about us being apart,’” says Tara. “God gives us the strength and patience to get through.”

Reflecting on the wedding, Marsch says, “We deliberately ensured nothing in the ceremony would diminish it. It wasn’t like: ‘Ha, ha. Isn’t this a great adventure?’ It may have had an adventurous feel to it, but in the end, it was a Christian wedding. It became a God-ordained moment.”

“At TMP, we don’t have the family networks common in many Mennonite churches, so it’s possible many who attended that morning had never attended a Christian wedding,” says Marsch. “For the couples, the day was elevated because they recognized what a public witness this was in favour of marriage.”

“My dad was so thrilled with the service,” says Bre. “He’s never been to church, but he wants to go to church now. 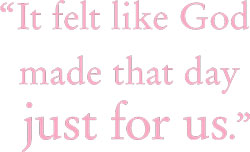 “It felt like God made that day just for us.”

Pull up a chair

Communion: Room for everyone

Artist moves to rhythms of grace

Marriage is a subversive act

The wedding theme fits into my value filters because I have the belief and opinion that God meant marriage and weddings to symbolize His relationship with His church and His followers. In other words, pagans, (or should I have use a more kind word?), are not God worshipers in any context whereas believers would be the appropriate participants in worship/wedding environment, in my opinion.