What's New
Volunteers in B.C. honour Leamington woman tragically killed...
Delete or not to delete, that is the...
Believers bring water for drought baptism
Encouragement to those in the arena
Keeping attention and making an impact: A few...
Open hands to reconciliation
From the editor
Approaching truth and reconciliation with love in our...
MB Seminary offers new MA in Transformational Leadership...
Multiply August Ukraine Updates
Home Life & Faithfeature articles A culture of faith

A culture of faith

Of the roughly 30,000 churches in Canada, over 11,000 are evangelical. Some of them are liturgical and traditional, others have modern worship bands; some are growing quickly and planting satellite congregations, while others are greying and some are closing their doors. These churches represent more than 100 denominations, and a growing number are non-denominational.

Hub of the evangelical wheel

While these churches are diverse, and sometimes in tension with one another, there are obvious similarities.

Their most consistent top priority is youth/children’s ministry, and the vast majority have Bible studies, prayer meetings and small groups during the week.

Most are involved in evangelism, acts of compassion and social justice in their communities, and many support international missions.

Across the country, the pastors interviewed for the Canadian Evangelical Congregations Study (see page 5) talked about being “missional.” Some told us they wanted their churches to focus less on internal programs that serve their own, and more on incarnational ministry and meeting felt needs out in their community. Pastors talk about similar themes from the pulpit, most commonly emphasizing devotional practices, evangelism and caring for people on the margins. 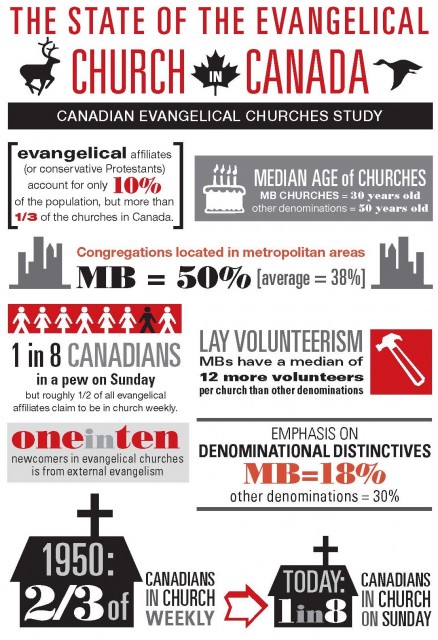 In a Canadian culture that is not supportive of church participation, evangelical churches show stability and vitality.

Only about one in eight Canadians are in a pew on any given Sunday, a precipitous drop from the 1950s, when two-thirds of Canadians claimed to be in church weekly. The attendance drop was particularly rapid for mainline Protestants (Anglican, United, Presbyterian and Lutherans) and Catholics in Quebec. By contrast, roughly half of all evangelical affiliates claim to be in church weekly.

Their high congregational participation partly explains why they can keep a disproportionate number of churches afloat. Evangelical affiliates (or conservative Protestants) account for only 10 percent of the population, but more than one-third of the churches in Canada.

Even though evangelical churches on the whole show resilience in a country where the cultural supports for church participation are disappearing, there are signs that have many concerned. Co-author Michael Wilkinson and I were hard-pressed to find a large evangelical denomination that was growing in Canada – at least, relative to population growth.

The recent Hemorrhaging Faith study showed that evangelical churches are losing a lot of their youth and young adults. This is partly why evangelical denominations are facing a shortage of future congregational leaders.

Last, but definitely not least, most recent immigrants to Canada are not Christians, but Muslims, Sikhs, Buddhists and Hindus. In 1981, 90 percent of Canadians were Christians by affiliation; by 2031, Statistics Canada projects that only two-thirds of Canadians will be Christian. Yet, denominational leaders tell us that much of their growth is from immigrants and ethnic churches.

Demographically, the future does not look good for evangelical churches.

How are MBs faring?

Since one of the denominations the study focused on is the Mennonite Brethren, how are we faring?

In many ways, the MBs are like the other four denominations we studied. However, we do stand out in a few areas.

For one, our churches are newer (a median of 30 years old, compared to the median among the other denominations of 50).

In addition, about half of MB congregations are located in metropolitan areas (the average is 38 percent). This matters because younger churches are more likely to be located in numerically expanding communities, which correlates with a church’s growth. Also, metropolitan areas attract the vast majority of new immigrants, another important source of growth.

Even factoring in church size (MB churches are a bit larger than is typical, with a median of about 140 attendees), MBs have a median of 12 more volunteers per church than the other denominations. We are also the only denomination that has more attendees volunteering for other organizations than volunteering within the church (based on pastor estimates). The average MB church has roughly 32 external volunteers per week compared to 26 internal volunteers.

In spite of our historical tendency to be a separated people, MBs now lead evangelicals in cooperative, missional activity.

On the negative side, MBs are not doing as well as the Alliance (the most ethnically diverse denomination in the study) in attracting immigrants, even though MBs have a higher percentage of metropolitan churches.

It appears that the struggle for a MB identity will continue for the foreseeable future.

There is still good news

We are wise to heed the warning signs these data provide; however, demographics are not destiny. The gospel is still good news for Canada, and the Holy Spirit can surprise us and confound our statistical models.

Nevertheless, a sociological overview of our churches can help us ask the right questions.

→How can we hold onto our youth and equip the next generation of church leaders?

→How do we minister to a generation of Canadians who are not looking for churches, and are not seeking religious answers to their felt needs?

→How do we reach out to recent immigrants and integrate them into our denomination and churches?

Demographics do not change the fact that God’s plan for transforming Canada is still his church, in congregations large and small, rural and urban.

—Sam Reimer is professor of sociology at Crandall University, member-at-large on the CCMBC executive board and a member of River of Life Church, Moncton, N.B.

This article draws from the Canadian Evangelical Churches Study (CECS), which interviewed more than 500 lead pastors from across Canada, along with roughly 100 youth/children’s pastors, from five denominations: Christian and Missionary Alliance, Pentecostal Assemblies of Canada, Christian Reformed Church, Convention Baptists and Mennonite Brethren. This informed Reimer’s 2015 book, A Culture of Faith: Evangelical Congregations in Canada, co-authored by Trinity Western University professor Michael Wilkinson, and published by McGill Queen’s University Press. Reimer particularly wants to thank those readers (pastors and denominational staff) who agreed to be interviewed.