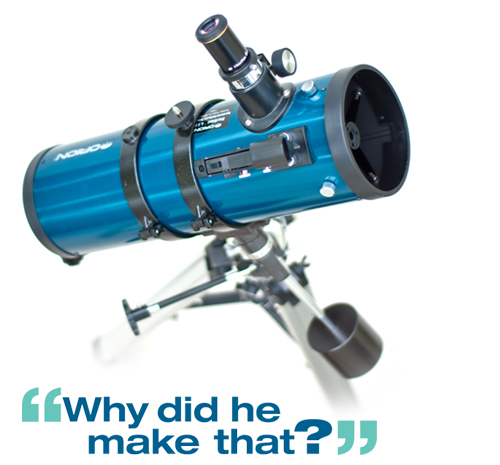 On occasion, I’ve set up my telescope in the courtyard at Columbia Bible College, Abbotsford, B.C., to show students the sky. Tuesday evenings work best, as I can interact with students going to and from Vespers. Several years ago, both Jupiter and Saturn were easy to see in the fall evening sky. It was fun to hear the students’ gasps and exclamations of amazement at our Lord’s handiwork.

That evening, we had very stable atmospheric conditions and in spite of the light pollution of the city, the detail of the cloud belts on the planets was quite good. The girls tended to like Saturn the most – crisp, serene, and exquisite. With my eight-inch diameter Newtonian reflector we could easily see the main ring division and the odd weather belt across the planet’s disc.

For the guys, volatile Jupiter was more exciting, its bumps and festoons moving with the planet’s rotation. We watched the tiny shadow of one of Jupiter’s moons move across the cloudy surface of the planet’s disc for more than an hour and a half. Everyone was astounded.

A few years later, I set up my newly built 16-inch reflector in the courtyard. The larger aperture allowed us to spot a few objects normally drowned out by the bright city sky, and I turned the scope toward Messier 13, a globular star cluster in the constellation Hercules. Through binoculars, the cluster is a small, faint fuzzball. Through a four-inch telescope, it starts to show its brightest stars as faint, flickering pinpoints of light covering a glowing ball. Through my 16-inch, it stands out as a swarm, a myriad of faint stars.

“Why did he make that?” one student quietly asked after gazing at the celestial wonder.

Here was an object unknown until the telescope was invented. Our Milky Way Galaxy contains about 150 globular star clusters, many comprised of hundreds of thousands of stars each. These objects are a supreme delight to amateur astronomers. Scientists are still not sure how they were formed. Every time there is a large enough cloud of hydrogen gas to gravitationally coalesce into a large star cluster, it tends to form massive, short-lived, hot, white stars that go nova, then blow apart. No matter how God did it, these clusters are truly a wonder to behold.

Why did he make that? The easy answer is, “The heavens declare the glory of God” (Psalm 19:1). Nowadays, “declare” is more of a solemn term, like what you do at a border crossing. “Shout” might express it better.

Through a transparent atmosphere, we can see much of our mighty God’s creation; his cosmos was designed for discovery. With technical instruments we see even more. “If God so precisely and carefully and lovingly and amazingly constructed a mind-boggling habitat for his creatures,” writes Lee Strobel in The Case for a Creator, “then it would be natural for him to want them to explore it, to measure it, to investigate it, to appreciate it, to be inspired by it – and ultimately, and most importantly, to find him through it.”

Our Lord wants us to marvel at his creation, even when we don’t quite understand it. The deeper we delve into his handiwork, the more we find his fingerprints all over. When I see a different bird, a stately tree, a rushing creek, a colourful sunset, a neighbouring planet, a distant galaxy, or a globular star cluster, I give him the glory. And for me, that’s worship.

–Darrell Abrahams is a member of South Abbotsford (B.C.) MB Church and vice president of the Fraser Valley Astronomers Society.