What's New
Abortion, the image of God, and faithful witness...
Choosing motherhood: The sacrifice of honouring life
MWC Assembly small but full of joy
Bad back doesn’t hold back MDS volunteer
Transition in CCMBC National Faith and Life Leadership
Leading through the trauma of covid: Part three...
The church distracted: When the main thing is...
Remote wilderness rescue turns into service with MDS...
How open is your mind?
Following Jesus together across barriers
Home Arts & Culture Start creation debate with questions, not answers 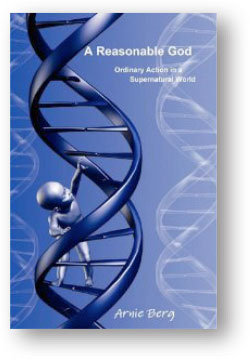 A Reasonable God: Ordinary Action in a Supernatural World looks at the debate between evolution, young earth creationism, and Intelligent Design, with an encouragement to Christians to look past fundamentalist, non-scientific ideas about creation, so they can intelligently interact with the scientific community. Arnie Berg provides an overview of each theory, looking at the scientific evidence, sources for arguments used, origin of theories presented, and also the theological implications of each.

Berg, a graduate student in BioInformatics, has experience in discourse on the topic and passion to share this with the Christian community. Contrary to the message of 20th-century fundamentalism, he observes, creation versus evolution is not a central issue of Christian faith. It’s possible to be a Christian and consider the evidence for evolution.

The book’s unique contribution is its critical comparison of three camps – evolution, young earth creationism, Intelligent Design – that have not been talking to each other. Many resources will focus only on their own perspective, leaving it to the (potentially uneducated) reader to evaluate scientific writings that each claim proof of correctness while strongly disagreeing with each other. Berg manages to go past that, providing help for discussing the topic of evolution with both Christians and others.

Berg successfully encourages the reader to look at science, evolution in particular, through new eyes. The function of science is to answer the question, “How?” In the case of evolution, how did life develop on Earth? No matter how science answers this, God’s function in creation is the answer to the question, “Why?”

If we turn to science with the question, “Why?” we end up with a hopeless view of the world. Our understanding of God will indeed be challenged if Natural Selection and gene perpetuation are the “Why?” of the universe.

And, if we turn to theology with the question of “How?” we end up with a God who grows smaller and smaller as scientific understanding grows, a God simply filling in gaps left unanswered by science. This is the problem with Intelligent Design. This God is in the process of being explained away.

The questions of “Why?” and “How?” must be kept separate. By keeping these two questions distinct, we give the two areas of study freedom to interact with and inform each other. We end up with a larger view of who our God is, and a greater openness for interaction with scientific ideas.

We should be in awe of a God who created and sustains a world that can generate life and even humanity. On creation, the MB Confession of Faith says, “All of creation expresses God’s sovereign will and design…. The universe belongs to God, who takes care and delight in sustaining it.” Our God is still Creator, and as we learn more about this incredible process, we see God’s wisdom and power declared in new ways. Our response should always be to worship God our Creator.

The reader is left with a question at the end of the book. Though Berg says that the Genesis account of creation is not intended to be read from a scientific standpoint, he fails to mention how we should read it. I would encourage readers who have understood Genesis 1–3 as a scientific account to look elsewhere for resources on how to approach this part of the Bible. Bill T. Arnold, in Encountering the Book of Genesis, gives excellent insight into Hebrew culture and surrounding cultures to understand what type of literature Genesis is and what this creation story is trying to communicate.

—Jennifer Bright Brandes lives with her husband in Saskatoon. She graduated from Bethany College with a BA in biblical and theological studies.