What happened to footwashing?

A brief survey of the practice among Mennonite Brethren 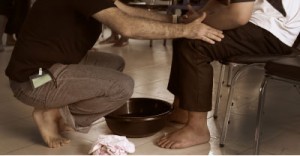 Early in their history, Mennonite Brethren took Jesus’ example and command to “wash one another’s feet” (John 13:14) literally. Like many other Mennonite groups, they considered it one of the ordinances of the church. It was usually practiced in conjunction with communion and variously signified cleansing, humility and service.

By the 1950s, according to the Mennonite Encyclopedia, 85 to 90 percent of MB congregations in the United States still practiced footwashing, but only a minority in Canada did so.

“It has become a point of personal and group tension in many churches,” noted Clarence Hiebert, author of a study paper on the subject presented to an MB study conference in Herbert, Sask. in 1959. The issue was whether or not it ought to be observed as a “literal outward ceremony”; that is, whether “observing it as an ordinance strengthens the spiritual meaning that lies behind it” as in baptism and the Lord’s Supper.

Besides the theological question, problems such as footwashing’s impracticality in some climates, foot diseases, immodesty for women removing stockings, and unsuitability for “the general aesthetic spirit of a worship service” were noted.

Three “other actual reasons” opposing the practice were cited: “a psychological personal resistance to the embarrassment of feet-washing in public, and…the intimacy of the ‘brotherly kiss’” accompanying the observance; other denominations’ view of the practice as “peculiar,” making MB members feel “ridiculed for this belief”; the “ecumenism of our day” which encouraged setting aside a “fringe doctrine” for agreed-upon “cardinal teachings.”

Hiebert concluded that it was not clear whether Jesus meant for it to be practiced literally as an ordinance. What the act “implies,” however, is “perpetually binding.”

The finding committee that summarized the paper and ensuing discussion proposed that MBs “continue to seek for light and not abolish the practice until a greater degree of unanimity has been achieved” in their understanding.

That greater degree of unanimity seems to have been gradually reached. In 1966, delegates to the General Conference meeting in Corn, Oklahoma, accepted a recommendation to revise the MB Confession of Faith. The recommendation included a statement of intent to revise the section on footwashing, to refer to it as an optional practice instead of an ordinance.

The subject was re-visited in 1969 in articles in the Mennonitische Rundschau and the MB Herald. John Rempel, in a Mar. 7 article called “Can we wash one another’s feet?” reminded readers of the 1860 Document of Secession that marked the founding of the MB Church and its statement: “Regarding footwashing, we confess that the Lord Jesus instituted it…to be practiced among one another, for the blessing is in the deed, not in knowledge.”

Rempel contended that when Mennonite commitment to the believer’s church weakened, the practice of footwashing seemed to lose relevance. Conversely, he said, where the “communal life of the church is strong, footwashing will be practiced.”

In the April 18, 1969 Herald, an unnamed reporter described the “very moving and liberating experience” of attending the footwashing service of the North Kildonan MB Church in Winnipeg, one of the few churches still practicing it at the time. While acknowledging that footwashing was “virtually a dead issue,” the writer wondered, “does our brotherhood have the courage to use symbols that cut clear across the conventions of a very proper and self-sufficient way of life?”

The revised Confession of Faith, which removed the section on footwashing, was adopted by the General Conference meeting in Winnipeg in 1975. An article by Gerald Janzen in the June 2, 1972 Herald had protested the change, but clearly his was the minority view. Rather, as expressed by John Redekop in a “Personal Opinion” column Dec. 11, 1970, people seemed to desire guidance in contemporary and non-literal applications of footwashing.

Other than an analysis of John 13:1–11 by Hugo Zorrilla in Direction in 1995, there has been little mention of footwashing in MB periodicals in recent years. The practice, however, has not been completely abandoned.

Of 114 Canadian MB churches that responded to an e-mail poll, “does your church practice footwashing”, 73 said No. Forty-one (41) responded with Yes or a “No, but” answer. The latter included: having done it once or twice, or using it occasionally or regularly in small groups, retreat settings or with youth. Four indicated it had been used as a demonstration, and four said they used handwashing as an alternative to footwashing.

Some respondents elaborated on their experiences. One found footwashing “a humbling, unique, intimate and marvellous experience.” Another remarked, “the proud and arrogant are usually opposed.”

One person commented that the act doesn’t matter much “if we don’t genuinely love one another and serve them in the name of Jesus.” Another said his congregation did not practice literal footwashing, but did practice “humble servanthood which is the principle behind the act.”

The pastor of a church that has included footwashing in Maundy Thursday services for several years expressed ambivalence about the practice. “In our culture,” he said, “the novelty of the practice can overwhelm its meaning.”

Another, whose congregation also included it in Maundy Thursday services, found that footwashing was both “warmly” and “curiously” received, though some “old-timers” stayed away because of it.

Because of its geographic link to “dusty roads and sandals,” this same pastor said, “we need an equivalent humbling/serving act for our time.”

Picking up the basin and the towel

years ago at First Brethren in Seal Beach I had two opportunities to go through amen’s foot washing ceremony. the first one I could not complete however the second one to a father-in-law that I did not respect fully- I actually did wash his feet and my hard heart was thoroughly humbled, I believe. never forgotten but was so worth it.. thank you God and spirit with Christ.