What's New
Leading through the trauma of covid: Part two...
Ask God which town
Where to from here?
CCMBC National Director attends 2022 ICOMB Summit
MCC Canada and MCC Manitoba sell shared property...
The world appears to be growing darker
Sharing a new and unified language
6 reasons to attend the MWC Global Assembly...
One too many
Just one more
Home Arts & Culture Genuine humanity is Jesus’ model

The Relational Pastor: Sharing Christ by Sharing Ourselves 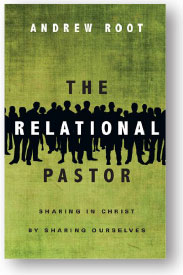 In The Relational Pastor: Sharing in Christ by Sharing Ourselves, Andrew Root sets himself against the ethos of individualism he claims has been undermining genuine Christian ministry since the Industrial Revolution. In contrast, he proposes a new theology of ministry that asks churches to make relationships central, because “relationships draw us into the very presence of Christ.”

“Relationship” and “relational ministry” are buzzwords right now, but Root says pastors (who are the primary audience of this book) have misunderstood what relationship actually is, using “relationship [to] win us the loyalty we need to get people to come and stay at our church,” and then treating mere loyalty to a particular church or even to the idea of Jesus as if it were genuine relationship.

Root insists this approach has been true throughout the modern age of individualism: people have been thought of as autonomous units who consumed products, resources, and religious services, and rewarded organizations (even churches) with loyalty, or punished them with disloyalty – all based around whether or not an individual believed her needs (or wants) were being meet. In such a system, the pastor is the one whom people seek out to help them meet their needs, and so the pastor becomes a self-help entertainer.

However, Root suggests a new era is already arriving, in which ministry will become much more about relationship with other others. This means empathy and sharing in other’s lives, which have a huge potential to create personal and social transformation. Such relationships matter because a person is unavoidably defined by his or her relationships to others. When pastors elevate the importance of genuine relationship among persons, “‘relationship’ is the very goal (not a tool) of ministry, [and this ministry] can be nothing more or nothing less than making space for people to encounter the very presence of God.” In this new setting, the pastor becomes the curator of spaces in which we people encounter each other in relationship.

It is important to note that in Root’s book, “individual” (which means getting needs met) and “person” (which means seeking relationship) are diametrically opposed terms though these words are basically synonymous in popular discourse. The Relational Pastor explains the reason behind this distinction, why it matters, and how churches can embrace the personhood of its members and seek to create opportunities for genuine relationship between them.

While I was initially captivated by the basic thrust of this text, I quickly became bogged down by two main problems with the book.

First, Root has difficulty limiting the scope of his work to the important details. This is best seen in the several chapters he devotes to recapping the arguments of Jeremy Rifkin’s The Empathic Civilization. Root treats Rifkin’s work as fundamental to his argument. I am not convinced this is true, but even if it were, he could have given a far more abbreviated treatment of the material and left the reader to seek out Rifkin’s work herself if she were so inclined. A section that should have been at most five paragraphs needlessly encumbered the early portion of the work.

Second, The Relational Pastor is repetitive. Sprinkled throughout the text are phrases like “it is worth saying again that…” While this constant rephrasing gives the reader the benefit of hearing ideas in multiple ways thus ensuring concepts are thoroughly developed, it quickly turns the experience of reading tiresome. For many paragraphs at a stretch, I felt as if nothing new were being offered. Less than 250 pages, this book is not long, but its length could have been considerably reduced, making for a more brisk and pleasurable reading experience.

In making his arguments, Root refers often to Scripture, particularly the theme of the incarnation, by which God demonstrated his desire to share our humanity and be present to us. While scriptural themes infuse the work, there are few places where he cites particular passages or takes time to do careful exegesis of these. I don’t take issue with this, because in general he references these themes honestly and his thought is in line with Scripture. But Root does not limit himself to Scripture. At one point, he moves between philosophy, neuroscience, anecdotal evidence received from a friend in ministry, and theology. His work is a well-orchestrated work working with threads from different sources of thought.

This book is no doubt important at this point in North American culture and history. It’s a fresh exposition of how current Christian practice is failing, and it gives pastors tools to help reshape ministry around relationship, which is both theologically legitimate and culturally relevant. By using stories throughout, Root imagines a compelling new ministry landscape. It should be noted, however, that this volume is purposefully not a “how-to,” because relationship cannot be packaged and sold.

This book is primarily written to encourage a shift in the theological imagination of pastors, thereby shaping future ministry praxis. In Root’s own words, “Ministry isn’t about building or maintaining something. Ministry is the gift given to us by God to share in God’s life, to participate in God’s action as we share in the person of others.”

I believe the kernel of Root’s argument has been faithfully represented in this essay. Given my two criticisms of The Relational Pastor, I suggest potential readers may find this summation of Root’s work sufficient for taking to heart his message, rather than reading the book, which is full of repetitive and extraneous material.

Andrew Root has a PhD from Princeton Theological Seminary and is associate professor in youth and family ministry at Luther Seminary (St. Paul, Minn.). He has written several books and journal articles on youth ministry, and has been a Young Life staff worker and a youth outreach/gang prevention counsellor.

—Kevin O’Coin and wife Breanne find relationship with people at The Meeting Place (MB church) in downtown Winnipeg, where he has been the pastor of community life since 2010.

Communion: Room for everyone