What's New
A matter of love: Reframing abortion
“Any chance you might be expecting a goldfish?”
Abortion, the image of God, and faithful witness...
Choosing motherhood: The sacrifice of honouring life
MWC Assembly small but full of joy
Bad back doesn’t hold back MDS volunteer
Transition in CCMBC National Faith and Life Leadership
Leading through the trauma of covid: Part three...
The church distracted: When the main thing is...
Remote wilderness rescue turns into service with MDS...
Home News The first step 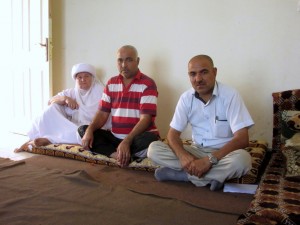 Qasim (r) with his brother Haji (c) and mother Huda (l) sit in the living area of the new apartment they rent using assistance from a project with MCC’s partner organization REACH and funded by a Canadian government grant. Qasim and 28 other relatives were displaced from their homes in Sinjar by an advance of the Islamic State group.  (MCC photo/Kaitlin Heatwole)

It’s been a year since Qasim* left his home in Sinjar, Iraq. He was fleeing an advance by the Islamic State Group – the same one that left tens of thousands of Yazidis like him stranded in the mountains. Qasim, his parents and three brothers, along with their wives and children, spent two days in a camp before moving on because it was too crowded.

Back in Sinjar, life had been good. They made a living from the farms and shops they owned, and the families lived close to each other in the village.

But after being displaced all 29 members of the extended family lived together for 10 months in an unfinished building owned by a friend. The roof leaked, the floors were wet and mold grew on the walls. They had no source of water.

Now the families are able to rent two apartments near Erbil thanks to a rent assistance project carried out by Mennonite Central Committee (MCC) partner Rehabilitation, Education and Community Health (REACH). The project provides monthly rent allowances for approximately 570 households in Erbil and Kirkuk using a C$1.9 million grant from the Canadian Government. 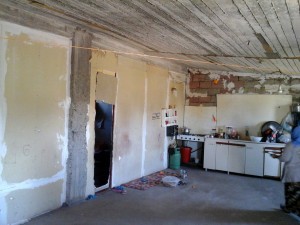 Qasim and 28 other family members used this makeshift kitchen in an unfinished building where they lived together for 10 months after being displaced from their homes in Sinjar, Iraq, by the Islamic State group. (MCC photo/Kaitlin Heatwole)

In both cities many displaced people live in unfinished houses says Hawkar Aziz, project manager with REACH. “No doors, no windows, bad sanitation, no water,” he says. “As well as no furniture, no property because they came [here] with nothing.”

For Qasim and his family the rent assistance is one step towards building a new life. The news they hear from Sinjar is bad, so they hope to find work and stay in Erbil. The family lives in a new development with affordable housing. They hope to register their children in an Arabic-language school this year. “It’s not perfect, but it’s better than anything else,” Qasim says.

Two other Canadian government grants are also supporting MCC’s response to the Syria and Iraq Crisis. Qasim and 28 other family members lived together in this makeshift living area attached to an unfinished building for 10 months after being displaced from their homes in Sinjar, Iraq, by the Islamic State group.  (MCC photo/Kaitlin Heatwole)

In Iraq’s Baghdad and Najaf Governorates, a C$1.2 million grant is providing essential items to displaced families. More than 1,960 households are receiving locally purchased kitchen supplies, water filters and hygiene kits. Each kit includes items such as soap, towels and laundry detergent. The project is being implemented by MCC partner Première Urgence Internationale—Aide Médicale Internationale, and will also provide training on sanitation and hygiene practices to help prevent water-borne illnesses.

In Syria, a C$1.5 million grant is providing children’s clothing, hygiene kits and feminine hygiene supplies to 4,300 households. The distribution is being done by MCC partner Middle East Council of Churches in the Daraa province, where fighting continues in the countryside.

The crisis is now in its fifth year – since 2012 MCC has responded with more than $30 million in emergency relief, education, peacebuilding and trauma support for people in Syria, Lebanon, Jordan and Iraq.

* All last names withheld due to security concerns.