What's New
A matter of love: Reframing abortion
“Any chance you might be expecting a goldfish?”
Abortion, the image of God, and faithful witness...
Choosing motherhood: The sacrifice of honouring life
MWC Assembly small but full of joy
Bad back doesn’t hold back MDS volunteer
Transition in CCMBC National Faith and Life Leadership
Leading through the trauma of covid: Part three...
The church distracted: When the main thing is...
Remote wilderness rescue turns into service with MDS...
Home News Syria, Iraq crisis response largest in MCC history 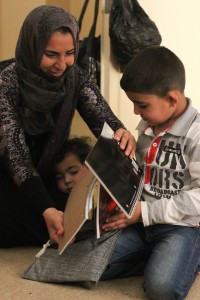 Asar and her sons Musab and Abdilbari open an MCC school kit they will use at an after-school educational program they attend in Jordan. The Syrian family has been in Jordan since 2014, but her husband can only find work a few days a month. Their last names are not used for their security. (Photo courtesy of Jane Ellen Grunau)

Since the Syrian war began five years ago in March, Mennonite Central Committee (MCC) has spent about US$34.6 million to relieve the suffering of Syrians, Iraqis and people in neighbouring countries who have been impacted by violence.

The war has caused trauma, homelessness and hunger among 11 million Syrians who have been forced from their homes and prevented many children from continuing their education.

The upheaval has stirred ethnic and religious tensions in Syria and neighbouring countries, including Iraq. The conflict spilled into Iraq in 2014, increasing the number of displaced people there to 3.3 million – a total that includes those forced from their homes by the U.S. invasion in 2003 and other conflicts.

MCC has responded to the vast, ongoing need in Syria, Iraq, Lebanon and Jordan with a larger financial response than it has ever conducted in the 96 years of the organization’s existence – larger than the response to the Haiti earthquake or the Indian Ocean tsunami. 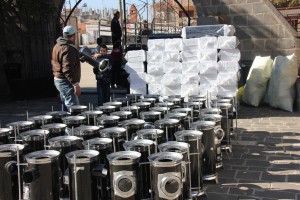 “This is the largest humanitarian crisis in a generation,” said Bruce Guenther, MCC’s director of disaster response. “The world is grappling with the highest number of displaced persons ever recorded – more than 60 million people – with about a quarter of them from Syria and Iraq.”

MCC’s response was made possible through individual donations of money, blankets and kits – relief, hygiene, newborn and school kits – totaling about US$10.6 million. In addition MCC used $US14.8 million from its account at Canadian Foodgrains Bank to support food projects and US$9.2 million in grants and matching funds from the Canadian government.

“In this protracted crisis,” Guenther said, “MCC has been able to respond effectively because we have worked in the region for many years. We have strong relationships and trust with partners who have tremendous capacity to deliver humanitarian relief to people most in need.”

During the winter of 2016, MCC supplied heaters and fuel, winter clothing and blankets in addition to its ongoing food, shelter and educational projects. Another MCC priority is addressing religious tensions and community conflicts that have been exacerbated by the conflicts in Syria and Iraq.

Through a US$400,000 grant from the Canadian government’s Office of Religious Freedom, MCC’s partners taught conflict resolution, promoted cross-cultural and cross-religious dialogue, and supported cooperation among diverse groups.

A Syrian church worker, who helped to distribute MCC’s supplies but who did not want to be identified for security reasons, said the supplies are important not just because of the need they meet, but the message they carry. 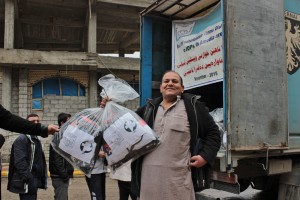 Ismael shows the bags of winter clothing he received from MCC through its partner Zakho Small Villages Project in Iraq. His family was among those displaced more than a year ago by the Islamic State group. His last name was withheld for security reasons. (MCC Photo)

“We believe that despite all the bad things going on and all the evil, our world is still so beautiful and still has so (much) good in it. People feel that goodness when they receive all the help that came from outside Syria because they feel there are people out there who are actually thinking about them,” the church worker said.

“Even the smallest aid that came to them is so appreciated…. You can see the happiness in their eyes when they saw that we were giving them that (item) because it came with love,” he said. “That’s the most important thing.”

To hear more of the church worker’s thoughts, see the video at mcccanada.ca/system/videos/4230.

As the crisis drags on and needs increase, Guenther encourages people to continue to give to MCC’s Syria and Iraq crisis response.

“While MCC assists with resettlement of Syrians in Canada, we know that millions more Syrians and Iraqis want to stay near home if they can have access to enough support to sustain themselves,” Guenther said. “We want to be God’s messenger of love and compassion to those in need.” 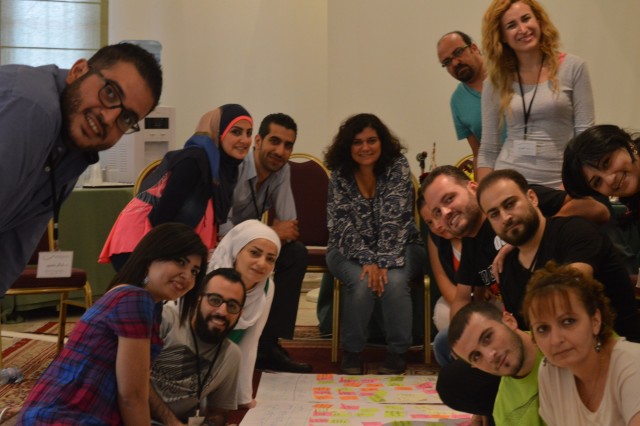 These Syrian young adults, whose names are not used for security reasons, participated in an MCC-sponsored workshop, Religious Freedom in Situations of Conflict. Using what they learned at this workshop, participants returned to their communities to promote religious dialogue and peacebuilding, hoping to dampen the extremism and sectarianism that has been fostered by the war. (Photo courtesy of Forum for Development Culture and Dialogue)