What's New
Through the conflict, life carries on in Ukraine
A FOCUS on Mission
Must Patience Be So Slow?
Harold Jantz: A Heart for the Mennonite Story
Lorlie Barkman: A Life of Creative Engagement
Last Days, First Days
Women in Ministry: Bertha Dyck
January Moment in Prayer “Holy Spirit—Fill Us!”
The Church as the Patient Body of Christ
Advent: Making Much of Jesus: Christmas Day
Home News Songs go where sermons can’t 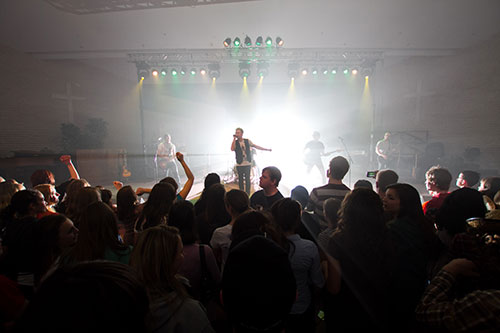 Leaving the bright lights of the front for the muted stillness backstage, rock band frontman Jordan Janzen is stopped by a teenage girl who had to thank him in person: the message of hope in his song “Cinderella” helped pull her through a battle with anorexia in junior high. This is one of the opportunities to speak into young lives that Janzen’s dual ministry as a youth pastor and rock star affords.

Convinced the music industry was God’s calling for him, Janzen released his debut solo album Crazy in 2008, featuring the single “Cinderella,” a song about a woman’s inability to see her God-given beauty.

“Everything just sort of lined up, and I trusted that he had a plan in it all,” Janzen says. “Initially I feared music would take a backseat, which it did, but I never really anticipated the forward influence pastoring would have on the music.” 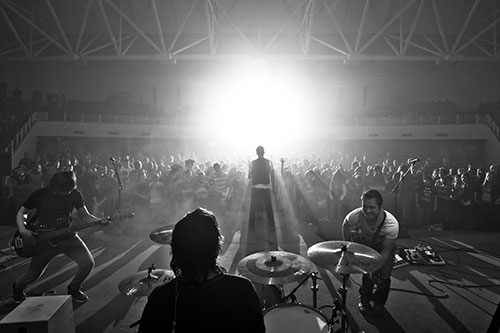 Youth pastoring matured his sense of perspective, Janzen says. Whether from observing the youth, building relationships with others, or learning what God desires from his life, the role at the church brought a new focus.

“With this shift of perspective, I’m processing things differently, and this is coming out in my thoughts, in prayer time, and eventually, into the music,” says Janzen.

Even as youth ministry took centre stage in Janzen’s life, it seemed God wasn’t finished with his music. After Janzen reconnected with former bandmate and high school friend James Shiels, the two began writing and playing together in their spare time – material that would later become The Color’s debut album.

Gabe Boschmann, Tyler Martens, and Larry Abrams came together with Janzen and Shiels to create the five-piece rock band. With the help of Grammy award-winning producer and sound engineer Howard Willing and Canadian producer Jay Tooke, they recorded an album that blew away the band’s expectations.

Fast-forward to the present, The Color is playing for a packed hall at Winnipeg’s MB Collegiate Institute after taking home three GMA awards, including New Artist of the Year.

However, their ministry goes beyond high energy rock songs (like their rock/modern rock song of the year, “Alive”) and acoustic worship sets. The band spends time after concerts getting to know their fans, sharing struggles and joys, and offering encouragement.

“My favourite part of ministry is being in relationship with people, and that’s why I think ministry can happen on so many different levels,” Janzen says, whether in church, a coffee shop, or rock concert.

“As a musician, I’m able to express so many different emotions. It allows me to connect with people in a different way that wouldn’t happen in normal
conversation.”

“We appreciate those [concertgoers] who speak up and don’t feel the need to be cool, but let their guard down,” Janzen says. Because the band aren’t seen as youth leaders, Janzen finds teens who wouldn’t normally attend church are more willing to open up and share their real struggles.

“Some of the conversations we’ve had wouldn’t have been
possible if it weren’t for the music,” Janzen says.

Where a sermon might fall on deaf ears or bounce off obstacles in a teen’s mind, a song has the power to bypass barriers and speak directly to the heart, Janzen explains.

“Certain songs, no matter what mood you’re in, take you to a place when you hear them.”

These raw moments with concertgoers “seem to be happening more and more,” says Janzen. “I think God is working through it all.”

Janzen and The Color are intentional about bringing listeners to a place of hope. It’s an important part of his multilayered ministry as a musician and a pastor, one that God is growing and his church family recognizes.

“His music is ministry, it’s a part of who he is,” Westside lead pastor Konrad Loewen says. We’re all called to live so as to build up the kingdom, Loewen explains, and while that requires obedience, it also relieves the pressure of trying to succeed on our own.

The support and stability at Westside gives Janzen the opportunity to be both musician and pastor.

“They’ve realized music drives me and they want to support my music as a church.”

“We have to trust God will work through it all,” Loewen says.

So Janzen continues building into the youth of his church – ministering and mentoring – writing music, and sharing his journey on stage, hoping his joys and struggles will resonate with others as well.

—Steven Sukkau is a reporter at his local newspaper in Southern Manitoba where he lives with his wife Kayla and their dog Larabee. He’s a member of Winkler (Man.) MB Church, where he and Kayla teach the high school Sunday school class.

Bethany invites Advancers to belong to the Truth