What's New
Delete or not to delete, that is the...
Believers bring water for drought baptism
Encouragement to those in the arena
Keeping attention and making an impact: A few...
Open hands to reconciliation
From the editor
Approaching truth and reconciliation with love in our...
MB Seminary offers new MA in Transformational Leadership...
Multiply August Ukraine Updates
Book Review of Return Stroke: Essays & Memoir...
Home Arts & Culture Relentless Goodbye: Grief and Love in the Shadow of Dementia

Relentless Goodbye: Grief and Love in the Shadow of Dementia 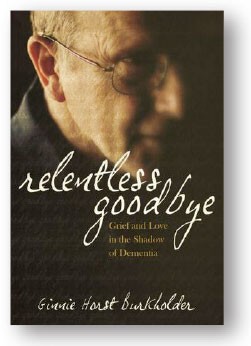 Relentless Goodbye: Grief and Love in the Shadow of Dementia
Ginnie Horst Burkholder

In 1996, at 51, Nelson Burkholder was diagnosed with Lewy body dementia (LBD), which exhibits symptoms resembling both Alzheimer’s and Parkinson’s disease. The diagnosis was made after more than a decade of sleep disturbances and puzzling behaviours. Fourteen years later, as his health continued to deteriorate, he was placed in a nursing home.

While Relentless Goodbye follows the trajectory of Nelson’s illness, the journey it traces most closely is the one his wife and longtime caregiver, Ginnie Horst Burkholder, is compelled to take because of him. She is in the difficult position of “losing” the man she married. She cannot enjoy the “perks” of being either married or single, but has the responsibilities of both. She must become like a parent to her spouse.

Burkholder, who received an elder caregiver award in 2007 from the state of Ohio, where she lives, did not set out to write a book. Writing for her was a way of processing changes and the emotions they triggered. So, what’s gathered here has the feel of a journal: raw, honest, unpolished, in-the-moment. It underscores that “just when you’ve figured out how to cope, you start all over because now there is something new falling away.” Companionable and supportive marriage in her circumstances is a “fantasy” and dismantling it “exhausting.”

But she learned as she went, and shares this too: about taking care of herself, forgiving herself, banishing the inner voice of the judge, finding laughter in dementia’s “word salads,” and enjoying gestures of tenderness that remain. She speaks of the need to confront “unhelpful beliefs” that loving spouses never get impatient with their partners, or that a person with faith wouldn’t question God or feel angry about loss.

Burkholder reached out by posting her writing on an LBD website. Brief anecdotes and comments from other caregivers are scattered throughout the book. Each chapter also includes reflection questions.

Readers looking for a narrative that marches firmly into resolution and equanimity may be disappointed. But those in caregiver roles will feel themselves at home in these words and be comforted to know they’re not alone. Others can be helped as well, to relate more supportively to those in caregiving situations.

—Dora Dueck is a writer and member of Jubilee Mennonite Church, Winnipeg. Her latest book is a collection of short stories, What You Get at Home, released by Turnstone Press in October.
dementia
0 comment