What's New
A matter of love: Reframing abortion
“Any chance you might be expecting a goldfish?”
Abortion, the image of God, and faithful witness...
Choosing motherhood: The sacrifice of honouring life
MWC Assembly small but full of joy
Bad back doesn’t hold back MDS volunteer
Transition in CCMBC National Faith and Life Leadership
Leading through the trauma of covid: Part three...
The church distracted: When the main thing is...
Remote wilderness rescue turns into service with MDS...
Home Arts & Culture Making a calling of creation care

Making a calling of creation care 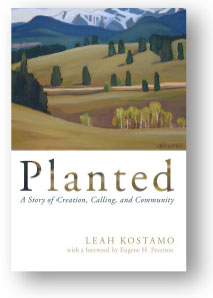 Planted: A Story of Creation, Calling, and Community

If anyone should be motivated to take delight in the world around us, it should be someone who worships a creator God. Vancouver writer Leah Kostamo attempts to do just that in Planted, an elegant book.

Leah and husband Markku Kostamo are the founders of a Canadian arm of A Rocha, a Christian organization that engages in scientific research, environmental education and community-based conservation projects in 20 countries around the world. It began in 1983 with Anglican priest Peter Harris, who, as someone has written, “developed an interest and passion in caring for and entering into the beauties and intricacies of God’s creation.”

Peter and his wife Miranda went to Portugal where they set up the first environmental care centre, calling it Quinta da Rocha (the farm on the rock) as a “Christian” bird observatory. From that tiny beginning has grown a worldwide Christian environmental movement on five continents.

In Canada, there are now 10 chapters, with two established centres, one in southern Manitoba and the mother centre in Surrey, B.C. A third is in its beginning stages outside Hamilton.

In the Pembina Valley, it was a Mennonite Brethren high school teacher from Manitou, Henry Martens and his wife Elma, who made the A Rocha centre possible. They began assembling property years ago to preserve the valley for future generations. Today, the A Rocha’s Pembina Valley Interpretive Centre, Pembina Valley Provincial Park and Pembina Valley Bible Camp lie alongside one another and A Rocha provides study and learning components for the Park.

In Surrey, Leah Kostamo took a course at Regent College with Peter and Miranda Harris, who were there during a sabbatical. It fired her imagination: “they loved God, they loved people and they loved creation.” That and her 1999 marriage to Markku Kostamo, an ecologist and environmental consultant who shared her vision, opened the possibility for the two to help lay a foundation for A Rocha’s first permanent centre. They were aided by a group of mostly professional ecologists and teachers.

Leah and Markku came upon an area called the Little Campbell River Watershed, a stream and estuary that empties into Boundary Bay and a nearby 10-acre property called Heritage Acres. These became the centre of A Rocha’s first efforts. There they farm, train interns and children to do field studies, do habitat enhancement and restoration and teach ways to protect the environment and create community.

Today, A Rocha has a larger centre called Brooksdale Environmental Centre, an estate that formerly housed a home for persons with disabilities. In each case, the sellers involved Christian people with strong sympathies to the goals of A Rocha. There are a number of Mennonites who’ve been part of the A Rocha centres.

A Rocha’s goals can be life-altering. Christians have often been accused of using the Bible’s words in Genesis 1 to have “dominion over every living thing” (v. 28) as a mandate to exploit and abuse the earth. But for A Rocha’s people it doesn’t mean that at all. They take inspiration from the words in Psalm 24, “The earth is the Lord’s and everything in it.” When they read the words of Genesis, they understand them to mean that as God’s “image-bearers,” we are to be stewards of the creation, tending it and caring for it. We don’t ever really own it.

One of A Rocha’s core ideas is the inter-connectedness of everything. Kostamo quotes a UN report that maintains that people displaced by environmental degradation now outnumber refugees displaced by conflict. When regions degrade, everyone and everything suffers. According to the Pacific Salmon Foundation, 190 different species depend on the salmon who come up B.C.’s rivers to spawn and die. Kostamo refers to a University of B.C. study that pointed out that the ecological “footprint” of the average North American (land needed to sustain our lifestyle) is 24 acres. For the rest of the world it is 5.8 acres. Waste outsourced from the U.S. ends up in countries like China where women and children may end up “assembling and de-assembling” toxic electronic equipment without the benefit of any safety gear.

But Kostamo is balanced. She reminds her readers that “the ballast to extreme asceticism is the doctrine of creation.” Through the incarnation, God entered the material world. Jesus was “not a disembodied spirit but a man of flesh and bone accused of gluttony and drinking.” The material world is affirmed throughout Scripture, she argues.

It’s this kind of humility and balance that makes Leah Kostamo’s Planted such an engaging and helpful book.

Harold Jantz is the retired editor of ChristianWeek and the Mennonite Brethren Herald.

Incarnate in all creation

A church in the image of God