What's New
Delete or not to delete, that is the...
Believers bring water for drought baptism
Encouragement to those in the arena
Keeping attention and making an impact: A few...
Open hands to reconciliation
From the editor
Approaching truth and reconciliation with love in our...
MB Seminary offers new MA in Transformational Leadership...
Multiply August Ukraine Updates
Book Review of Return Stroke: Essays & Memoir...
Home News Ontario church to pilot MCC-inspired Peace Clubs 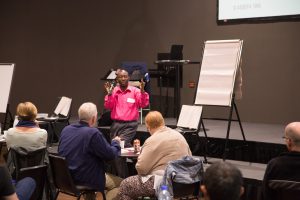 MCC is working with a multi-site Ontario church to build a curriculum for educating community members on themes around conflict, violence and reconciliation.

The Meeting House church is partnering with Issa Ebombolo, who founded Peace Clubs in Zambia with the support of MCC, to tailor his curriculum for a Canadian audience.

Ebombolo, who originally hails from the Democratic Republic of Congo (DRC), says growing up in a conflict zone where young people were recruited into the military inspired him to establish Peace Clubs when he later moved to Zambia.

“The country (DRC) has experienced so many wars since independence. I saw how young people were involved in violence and there was a need to use them in a different direction—the opposite direction,” he explains.

Peace Clubs started in 2006 in three schools in Zambia to help students work for right relationships, build peace and speak up for their own rights and safety. The program has grown exponentially and is operating in 650 schools in 14 African countries, but The Meeting House is the first church or organization to bring the Peace Club model to Canada.

A small group from Pennsylvania that took part in a learning tour to Zambia in April 2016, which included learning about Peace Clubs, are also in the process of creating a curriculum for use in a U.S. context.

The Meeting House has partnered with MCC since 2007, donating to HIV and AIDS, relief and peacebuilding projects, including Peace Clubs, in Southern Africa.

This November, The Meeting House will pilot an eight week training geared towards adults, says Matt Thompson, the church’s compassion manager. Up to 10 adults will take part in the training taught by volunteers to learn how to manage conflicts and wrestle with reconciliation on small and larger scales. 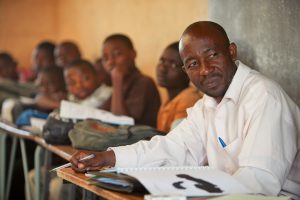 “Our goal is to further disciple our community into becoming peacemakers at their sites as well as in their cities,” Thompson says. “Whose role is it to build bridges or promote reconciliation other than the church?”

Even though Canada isn’t a war-torn country like DRC, Ebombolo says the Peace Club curriculum is relevant.

“Canada is a multi-racial and ethnic country and therefore these neighbours come from conflict countries, different backgrounds and they come with baggage and issues. They don’t leave those issues behind. It’s different, and people need to learn ways and means to handle these differences. This is why Peace Clubs are needed in Canada,” Ebombolo says.

Thompson says the curriculum will also look into reconciliation with Canada’s Indigenous peoples.

After the first round of workshops, The Meeting House will go back to the drawing board and make any necessary changes to the curriculum before hosting another round, likely next year. After the evaluation phase, the curriculum will be made available to other churches and non-religious organizations in Canada that promote peace.

Mennonite Central Committee: Relief, development and peace in the name of Christ.