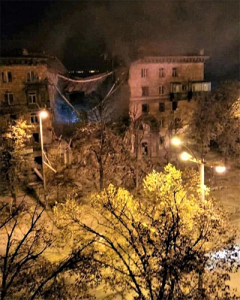 On October 8, 2022, an explosion on the Kerch Bridge caused the partial collapse of the road used to supply Russian troops in occupied Crimea. The explosion occurred one week after the announcement of the annexation of four Ukrainian regions by Russia. Since then, there have been a dramatic increase in Russian attacks on Ukraine. Our Ukraine MB pastors, including Multiply workers Maxym and Anya Oliferovski, based in the hard-hit city of Zaporizhzhya, ask for our continued prayers for a cessation to the violence.

Reports confirm that the missiles hit multiple high-rise apartment buildings in the city center of Zaporizhzhya, burying at least 16 people under the rubble, taking out windows within a radius of 500 meters, and tearing balconies from the walls of buildings nearby. The Ukraine MB conference (AMBCU) has helped rally volunteers to join the specialized services who are clearing the debris, recovering the bodies, and tending to the wounded. A child trapped under the rubble was, miraculously, rescued. Others were not so fortunate. As of October 8, two have died from the blasts and ten people are in the hospital.

Pastor Alexei Y. of the Heart of Christ Church in Berdyansk, writes, “Another night of terror, another night of shelling, with unsuspecting people asleep in their beds. God, protect us! Lord, have your way!”

Another pastor writes, “I will share with you one true story about a   house, and the family who lived in that house. In February, in the first days of the war, a mother decided to move with her two children from their house in the central areas of the Dnieper to a safer place, in a smaller house with her grandmother. Today a Russian missile hit that small, supposedly safe house. The mother Natasha, her twelve-year-old daughter, Vasilis, her eight-year-old boy, Ivan, and the grandmother, Alla – all dead. Even as I write these lines, explosions thunder again, and again. No, I don’t want to think about it. God, forbid this! Please pray for the military, for the volunteers, for the medics, for the politicians, for the rescuers, for the children, for everyone. God, save us! God, hold us close! Gather up the shards of our broken hearts.” 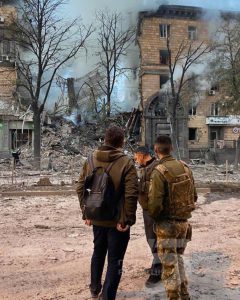 Sleep deprivation is intensifying the suffering, as the attacks are relentless. Maxym tells us, “This war is a cruel and evil thing. It takes the physical life of so many, and also drains the emotional life from the rest of us. Our city of Zaporizhzhia and its surrounding villages have been under severe missile attacks almost every night. We can hardly sleep. We pray that God helps restore our land to us, but we know that it will take years to restore the people. God, help us! Please pray against the forces of evil, on the loose and triumphing. Only the Lord of all Lords can turn this tide!” Maxym and his New Hope Center staff in Zaporizhzhya relate that the need for blood donors is now urgent. Humanitarian convoys to occupied territories have been stopped, halting the flow of vitally needed supplies. 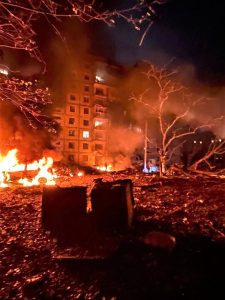 As winter looms and fuel and electricity are cut off, our MB churches are working hard to provide relief to the displaced and vulnerable. MB Ukraine conference minister Roman R. reports that they continue to partner with Mission Eurasia to produce more wood-burning stoves and stockpile fuel for the winter. Their goal is to produce and distribute up to 2,000 wood-burning stoves within the next two months, and to deliver them to families in need, along with a food package and a Bible. He writes, “Pray that we will be able to provide warmth for their bodies, and warmth also for their souls.” Pastors Oleksii M. and Sergey R. have so far delivered 100 ovens, along with provisions of coal and firewood, to guard against the threatening cold.

Oleksii writes, “From the night until now, when I am writing this message, there has been a massive shelling of missiles in almost all areas in Ukraine. Power grids are damaged in many cities and now there is no electricity, no water, no communication. We are still looking for more stoves and firewood, people are moving to basements and to underground shelters for safety. We are again, as at the beginning of the war, preparing for the mass evacuation of people, and providing them with housing, food, and clothing. Friends! Pray for Ukraine!” 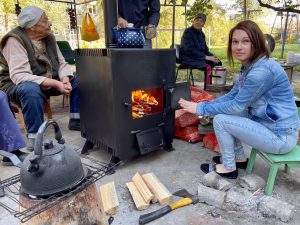 Maxym and Anya’s daughter Katya, who chose to return to Ukraine from Germany to be with her parents and the other workers at New Hope Center, has been practicing her profession as an Art Therapist with displaced and frightened children. The task is made even more daunting, in the face of a trauma which is ongoing, but she holds firmly to the hope that God is with them.

From the outskirts of her city, where her parents are initiating a recovery center, she writes, “It is hard to call this morning a good one. The darkness is so great that you cannot bear it alone. Psychologists call this condition a ‘collective trauma’. I call it the black hole that absorbs you from the inside. Yet, somewhere deep inside, a little light is smoldering. A beacon of hope. We must hold on to Him, with all our might! God is with us, he does not forsake us; these words have kept me standing. 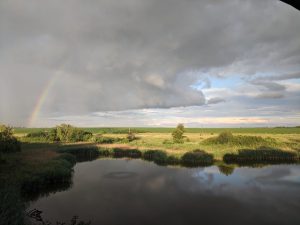 “One day, there will be rejoicing on our streets. Until then, only hope remains… One day, we will look up at the sky, without fear of the shells that fall down from it.”

In 2018, MB Mission embraced a new name: Multiply. The tagline of the new global mission agency was: together that the world may know. Still based in the Mennonite Brethren family, Multiply was called to facilitate church planting locally, nationally and globally. The vision was focused on making disciples, planting churches and growing partnerships.