Pastor Oleksii Makaiov reflects on the intensified invasion of Ukraine:

“It was impossible to imagine that we would ever go through this. The feeling of confusion in the first days of a full-scale invasion was replaced by a clear understanding that action was needed. We started feeding people, smuggling them out, rescuing and accommodating them. Refugees are [like living] stories – thousands of tragic stories of pain and loss. We want to help at least someone, in this huge sea of need… 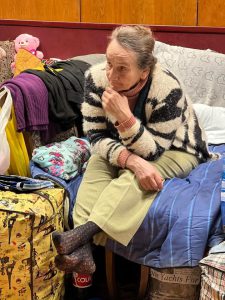 “We are grateful to all who collect cargo, donate money, transport, receive and distribute. May God be the answer to all your needs and the peace of God shall fill your hearts.”

Oleksii and his team have engaged in the following recent relief efforts:

In 2018, MB Mission embraced a new name: Multiply. The tagline of the new global mission agency was: together that the world may know. Still based in the Mennonite Brethren family, Multiply was called to facilitate church planting locally, nationally and globally. The vision was focused on making disciples, planting churches and growing partnerships.