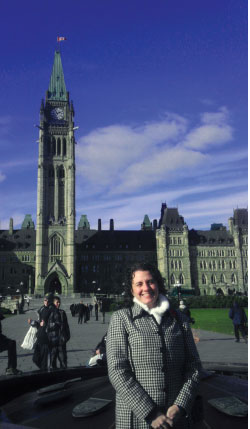 Ottawa has always been one of my favourite cities. It’s an old, stately city – whose name is derived from the Algonquin word for “trade” – home to the Rideau Canal, Winterlude, beaver tails, and the ByWard Market. It’s also Canada’s capital, with Parliament Hill attracting some three million visitors each year.

Last October, I was one of those visitors. Along with eight others, I was part of an editors’ learning tour hosted by MCC’s Ottawa office. Over the course of three days, we learned about MCC’s approach to advocacy and how workers champion the cause of Christ by giving voice to the voiceless.

As a well-respected Christian agency, MCC is regularly invited to speak into the process of shaping Canadian legislative policy on issues connected to MCC’s programs. For example, MCC recently gave testimony at a hearing on Bill S-10, a piece of legislation that seeks to ratify an international agreement to restrict cluster munitions. (These “cluster munitions” are bombs that can explode in the fields of unsuspecting farmers in places like Laos and Lebanon – long after war has ceased – killing innocent mothers digging in the garden or children at play. Many MCC folk work directly with these families.)

“Canada once again has the opportunity to stand as a global leader in preventing the devastating impacts of an inhumane and reprehensible weapon,” said MCC’s written statement to the Senate Foreign Affairs committee. “Governments can, and must, do more to address this unacceptable humanitarian problem.”

Political advocacy can and does make a real difference in people’s lives.

Dennis Gruending, author of Pulpit and Politics: Competing Religious Ideologies in Canadian Public Life, also spoke to our group and talked about the spirit with which we should approach political conversations. “Our traditions are wise,” he said. “We have lots to share, but we do so with humility.”

We must also embrace a long view of things. “Advocacy is generational work,” said our host Paul Heidebrecht. “The measure needs to be long-term and systemic. We play a minor role in trying to tweak things, with a sense that God is ultimately in control. We need a good sense of the gospel in all this.”

Mennonite Brethren involvement in the political process has been a topic of some controversy – and our relationship with government has sometimes been a bit tenuous. In the early 1900s, there was an arms-length association, including a resistance to vote in elections. Many MBs were more comfortable in the role of political “spectator” rather than participant.

But, according to John Redekop, political science professor, MB member, and author of Politics Under God, politics shouldn’t scare us. They didn’t scare Jesus. “One can argue, it seems to me, that both in his words and in his deeds, Jesus did, in fact, get involved politically. Aside from his interaction with political officials during his ministry, he was crucified by Roman authorities because of alleged insurrection and treason.”

Naturally, there must be guidelines for political involvement. Our evangelical Anabaptist foundations outlined in the MB Confession of Faith should guide what we believe, who we support, and how we engage in the political arena.

“When we detect some ethically bad policy or action,” writes Redekop, “we call attention to it and urge our rulers to remedy the situation. The issue at hand may involve racism, prejudice in immigration policies and regulations, corruption in the bureaucracy, the misuse of foreign aid, militarism, desecration of the environment, judicial injustice, and much more.”

History paints a largely positive picture of what can happen when Christians – driven by their biblical beliefs – add their voice to public dialogue: Think of William Wilberforce who led the movement to abolish slavery in England, or MP Joy Smith who, in 2010, successfully passed a bill to amend the Criminal Code, imposing a five-year mandatory penalty for offences involving human trafficking. (Incidentally, Smith calls Winnipeg’s Eastview Community [MB] Church home.)

We have an incredible privilege – and duty – to be world shapers.

Trouble in the capital

However, the government doesn’t always welcome critique from citizens, particularly those who work for the church or other charities. In October, Canada Revenue Agency “reminded” the Canadian Mennonite not to overstep the boundaries of political activity in their magazine. (Currently, charities are allowed to use 10 percent of their resources for non-partisan political activities, providing those activities further the agency’s charitable purpose.)

Canadian Mennonite editor Dick Benner responded in a November editorial: “I am most of all saddened at a time when our faith community, collectively, is becoming more vocal on public policy issues as an expression of our Anabaptist faith, that we are being constrained under the legal language and interpretation of the law to lower our voices and dim the lights of our witness.”

Is it right to stay silent? Or does our faith compel us to announce the gospel – to proclaim peace, to advocate for “the least of these,” and to proclaim God’s love to a world starving for some good news?