What's New
A FOCUS on Mission
Must Patience Be So Slow?
Harold Jantz: A Heart for the Mennonite Story
Lorlie Barkman: A Life of Creative Engagement
Last Days, First Days
Women in Ministry: Bertha Dyck
January Moment in Prayer “Holy Spirit—Fill Us!”
The Church as the Patient Body of Christ
Advent: Making Much of Jesus: Christmas Day
Advent: Making Much of Jesus: Fourth Advent
Home News MCC responds to devastating Mexico City earthquake 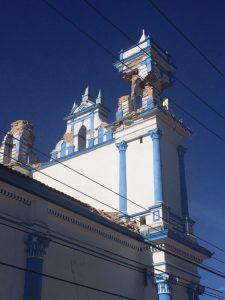 A church in San Cristóbal de las Casas, Chiapas, Mexico, sustained damage during an 8.2-magnitude earthquake on Sept. 7. MCC is planning a response to this earthquake with their local partners, and is also assessing needs following the most recent quake that occurred Sept. 19. MCC photo/Quinn Brenneke

MCC is responding to the two earthquakes which ravaged Mexico, including the 7.1-magnitude quake that hit southern Mexico near Atencingo, Puebla state, causing significant damage in Mexico City on September 19.

Hundreds of buildings collapsed in Mexico City, including some schools, trapping people in the rubble. More than 225 were killed in the capital, and the death toll continues to rise as citizens pick through what’s left of buildings.

“There’s a lot of anxiety around here. We’re still in shock,” says MCC representative for Mexico Liliana Alvarez-Woo. “The people are all very nervous and frightened by the physical damages, especially because another earthquake happened earlier this month.”

Like many other people, Alvarez-Woo and her husband Oscar Benavides Calvachi evacuated their home as a precaution, because neighbouring buildings were damaged and one collapsed.

This earthquake comes less than two weeks after an 8.2-magnitude quake hit Pijijiapan, Chiapas, Mexico. It was felt throughout south and central Mexico, as well as in Guatemala and El Salvador and was the strongest earthquake to hit Mexico since 1985.

In all this, Alvarez-Woo says she finds hope in many stories of people coming together in a difficult situation.

“There are many supportive people working in solidarity with one another,” she says. “Houses and public places have been adapted to attend to people affected.”

The stronger quake killed at least 90 people in the states of Oaxaca, Chiapas and Tabasco on September 7. In Guatemala, reports of damage vary across the country, with the northwestern highlands of San Marcos, Quetzaltenango and Huehuetenango experiencing the most damage.

MCC is planning a response to the earlier earthquake with our partners, and we are assessing needs following the most recent quake.

In Guatemala, MCC is coordinating and assessing needs with the Diocese of San Marcos. The local partner reports damage to housing and water systems as a result of the earthquake earlier this month.

MCC welcomes your support for our relief work in Mexico and Guatemala.

[Rachel Bergen is a staff writer for MCC in Canada.