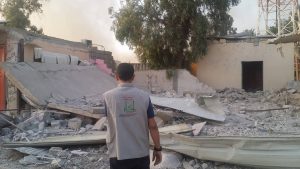 MCC is funding an emergency water project for 10,000 families in the Iraqi town of Qayyara and the surrounding area after residents were liberated from ISIS in August 2016.

For two years, the people of Qayyara had suffered under the rule of the Islamic militant group, which stole houses and possessions, enforced a strict dress code, restricted access to the outside world and imprisoned, tortured or killed those who violated their laws or opposed their rule.

However, gaining freedom also had its costs.

In the process of forcing ISIS from the city, Iraqi and foreign militaries bombed parts of the city’s main water treatment plant that was used as storage for ISIS weapons. In addition, as ISIS was retreating, its fighters cut power lines in the area and lit oil wells on fire. Thousands of people were left without electricity or access to clean drinking water.

Without electricity, citizens collected donations to pay for fuel to run the generator that powered the water pumping station for just a few hours a day – not nearly enough to meet the need. The water that did come into their houses was unfiltered river water that people used for cooking and cleaning.

As a result of the low supply, some residents had to buy costly water from tank trucks. They also bought clean drinking water if they could; some could not. 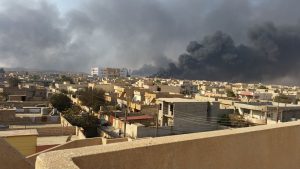 Thick smoke rises from burning oil wells that ISIS ignited as the group withdrew from Qayyara. (Photo courtesy of Afkar Society for Development and Relief)

MCC learned of the need and in January began a three-month project to make sure all 10,000 households in the area had access to enough water.

Through Afkar Society for Development and Relief – an organization that was itself displaced from its headquarters in Anbar by ISIS in 2013 – MCC is providing 1,849 gallons of fuel per week to run the generator. The fuel operates the pumping station for 10 hours each day, ensuring that water reaches everyone on the public network.

In addition, MCC supplied water purification equipment so people who cannot afford to buy drinking water can get free water at a central public location.

Providing fuel is a short-term solution, but one that’s vital. In March, the United Nations Development Program will begin rebuilding the destroyed water treatment plant.

Afkar’s work in Qayyara is coordinated by Mohammed (his last name is not used for security reasons), who is originally from Qayyara but was living outside Iraq when his hometown fell to ISIS. The structural engineer now lives and works in Erbil with Afkar.

“I’m so proud to work on this project in my hometown,” said Mohammed, who still has two brothers living in Qayyara and is grateful to be a part of a project that benefits them and his neighbours.

“The people in Qayyara are so happy that water is free,” Mohammed said, referring to getting water through the system instead of having to pay for water from other sources. “So few of them could afford to pay for the water. They have many needs, but water is a basic need.” 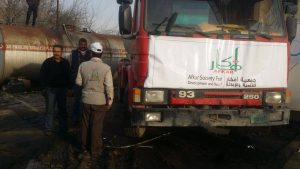 Kaitlin Heatwole, MCC Iraq program coordinator, helped facilitate the project in Qayyara, the latest in a long line of projects MCC has carried out to support people affected by ISIS.

“There have been constant waves of newly-displaced people every month for the past three years,” said Heatwole. “Even though they lost their homes or their families, people who were displaced last year have become old news because there are more waves with more displaced people.”

“So many lives have been turned upside down by the conflict in Iraq,” said Heatwole. “Through MCC’s work in Iraq, we are meeting needs that are not otherwise being addressed. Sometimes it’s not very fancy – like filling a gap in fuel so that families have water – but it’s what people need.”

[Rachel Bergen is a writer for MCC Canada.