What's New
Abortion, the image of God, and faithful witness...
Choosing motherhood: The sacrifice of honouring life
MWC Assembly small but full of joy
Bad back doesn’t hold back MDS volunteer
Transition in CCMBC National Faith and Life Leadership
Leading through the trauma of covid: Part three...
The church distracted: When the main thing is...
Remote wilderness rescue turns into service with MDS...
How open is your mind?
Following Jesus together across barriers
Home MB HeraldColumns Let God do the sorting

Let God do the sorting 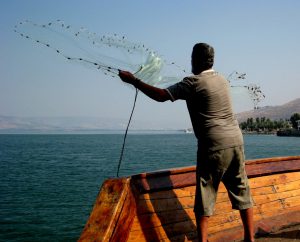 From a boat on the Sea of Galilee, a fisherman demonstrates the ancient art of casting a circular net. Weights along the outer edge sink rapidly, pulling the web around any living thing below. Waters next to Jesus’ ministry base at Capernaum teemed with tilapia, carp, and sardines when his first disciples plied their trade.

Fishing was a significant part of the regional economy in the first century, evidenced by names of nearby towns: Bethsaida (“house of fishing”) was hometown to Peter, Andrew, and Philip; Taricheae (“pickled fish town,” called Magdala in Hebrew) probably was home to Mary Magdalene.

Disciples of Jesus appear in the Gospels variously mending nets, fishing all night, counting fish, extracting a
coin from the mouth of a fish, and eating seafood breakfast on the beach with the risen Christ.

“The kingdom of heaven is like a net that was thrown into the sea and caught fish of every kind,” Jesus told his
followers. “When it was full, they drew it ashore, sat down, and put the good into baskets but threw out the bad. So it will be at the end of the age. The angels will come out and separate the evil from the righteous and throw them into the furnace of fire” (Matthew 13:47–50 NRSV).

At a time when some Christian denominations excommunicate or divide over contested matters, Jesus’ fishing parable is instructive.

Galilean fishermen typically used nets, not hooks, to harvest their catch. Evangelism and church discipline, according to this imagery, are broad and inclusive. Nobody gets hooked individually by ruse or violence. Rather, the wide embrace of a net draws in a motley and diverse catch. At the end of the age, these get sorted –
not by you and me, but by angels.

How tempted I am to start sorting now!

Toss out fish whose politics irritate me.

Discard those not to my taste.

Get rid of any whose views don’t seem biblical according to how I interpret the Bible.

But instead of putting you and me into the sorting business, Jesus implies that we are to cast a wide net.

Other biblical images likewise suggest that Jesus advocated an inclusive people-gathering. The kingdom
of heaven is like a farmer’s field with both wheat and weeds, he taught. These grow side by side until harvest,
then reapers (angels?) sort them and destroy the worthless plants (Matthew 13:24–30).

In John’s Apocalypse, it is Christ who can remove lampstands (congregations), not the churches themselves
(Revelation 2:5).

Our Lord did not suggest that belief and behaviour are irrelevant to salvation. There are consequences for those who do not measure up. When God brings harvest at the end of the age, weeds will go up in smoke and bad fish end up in the furnace, “where there will be weeping and gnashing of teeth.” We do well to learn, practise and teach what God requires for holy living.

But thank God, we can focus on net-casting and let God do the sorting.

J. NELSON KRAYBILL is the president of Mennonite World Conference. He lives in Indiana. This article was adapted from “Holy Land Peace Pilgrim” (May 5, 2018, peace-pilgrim.com). MWC is a community of Anabaptist-related churches; the Canadian Conference of Mennonite Brethren Churches is a member.