Leadership: from hero to host 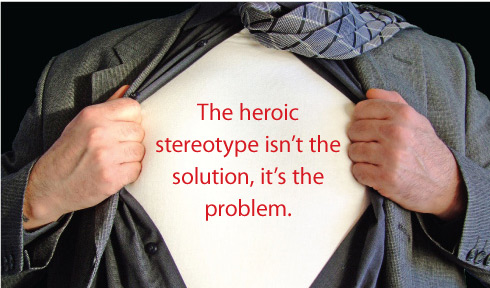 What type of leadership does the world need? In a 2001 interview, writer and  management consultant Margaret Wheatley said, “We need to move from the leader as hero, to the leader as host. Can we be as welcoming, congenial, and invitational to the people who work with us as we would be if they were our guests at a party? Can we think of the leader as a convener of people? [We need] a fundamental and unshakeable faith in people. You can’t turn over power to people you don’t trust. It just doesn’t happen.”
The best practices of leadership – those that seem to bring lasting change and genuine renewal to organizations and individuals – mirror the Anabaptist vision. They’re practices that call us to covenant, community, faith, hope, and love. They are practices of hospitality and shalom.

“The kind of thinking that will solve the world’s problems will be of a different order than the kind of thinking that created them in the first place,” said Albert Einstein.
Our current leadership models were shaped by the Industrial Revolution and the need to increase production. Our models emphasized efficiency, command, and control, and located leadership in heroic individuals. We also separated leadership from particular soils, assuming that leadership would look the same everywhere. As our lenses for seeing leadership narrowed, leadership itself became something exceptional, something unexpected.
But these lenses don’t allow room for new kinds of leadership, like the poetic leader described by Alan Roxburgh, or the “boundary crosser” who enables rich connections in the community. If we don’t see or recognize new types of leaders, we won’t validate or equip them. Many good things that would otherwise happen might never occur because these leaders will be afraid – or not encouraged – to step up to the plate.

The leadership style that once dominated our culture is becoming passé. Instead of the Lone Ranger, we have Frodo, who carries the ring “though I don’t know the way.” Instead of Superman, we have Neo from The Matrix. These leaders are often introverts who shun the spotlight; self-questioning types who rely on those around them for strength, clarity, and purpose.

The interplay of individual and community

Leadership is “the capacity of a human community – people living and working together – to bring forth new realities,” says American scientist and writer Peter Senge.
It isn’t possible to separate leadership and community. Community is the soil in which leadership grows, and leadership in turn cultivates environments where growth occurs.
In a mechanistic model, we’re stripped of our uniqueness. We fill a role, but don’t live from the heart. We are less invested when we feel like a cog in the machine. We may experience Gesellschaft (impersonal society), but Gemeinschaft (interdependent community) becomes a distant dream.
The heroic stereotype – top-down, immediate, all-transforming leadership – isn’t the solution, it’s the problem. If only those positioned to direct large teams are leaders, all the rest must be followers. Those labelled followers inevitably act like followers, sapped of initiative and the energy to pursue their personal vocation. To follow Jesus, to be a disciple/priest, is to respond to a call. When we look for workers to fill a post, the vision is owned by the leader. When we raise disciples, we form hearts that respond to Jesus.
One of the characteristics of our time is sky-rocketing complexity. Al Gore aptly stated the challenge in his book, The Ingenuity Gap. Complexity quickly overwhelms us. We feel alone and insecure in the face of the unknown.
But when we walk closely with others, we share strength and perspective. We are more likely to endure the journey toward change, more likely to survive the waiting. As network theorists put it, “Life emerges where there are rich connections.” Consider Ephesians 4:16, where Christ is known at the point of connection. We have to invite participation and encourage open conversation and begin to listen deeply. In our Anabaptist tradition, this is akin to the “hermeneutical community.”

A posture of vulnerability

Moving from hero to host also means vulnerability, a new relationship to power. There is a great difference between giving up and surrender, embracing the power of that which has overtaken you. The goal of Christian leadership is shalom, the summing up of all things in Christ. But the kingdom is not something we achieve; it is something God offers us as a gift. It is something that breaks into our world in power (see 1 Corinthians 1, 2).
In the popular comedy Bruce Almighty, a television reporter inherits all God’s power. When Bruce uses his power in a restaurant to part his soup, God shows up and gently chastens him. “A single mom who holds down two jobs to feed her family, that’s a miracle,” he admonishes. Bruce’s transformation comes when he finally admits that his inner life is the problem. He finds humility and love in the same moment.
As Martin Luther King Jr. so aptly put it, “Power without love is reckless and abusive, and love without power is sentimental and anemic.”
Leadership that has all the answers may provide stability, but it’s not really leadership. Leadership that’s all about power is appealing, but it’s not transforming. When we insist we’re in control, we have no need for God or faith, and we stop listening. Organizations that are oppressive and leaders who use people are really operating in fear.
Yet things we have no control over can absolutely change our lives. We don’t discover community around our strengths, but around our weaknesses. It is weakness that creates a welcoming space for others. Paul’s hymn to the kenosis (emptiness) in Philippians 2 illustrates the profound movement of God toward vulnerability. In 1 Corinthians 1, Paul is clear that worldly wisdom is foolishness in God’s kingdom. Following Jesus’ example, we need to become hosts, willing to be vulnerable in our relationships. For that level of connection to exist, there must be grace and love.
Every Wednesday and Friday a group from our Metro community out of Willow Park Church, Kelowna, B.C., are on a street corner offering sandwiches, coffee, gloves, hats, and sleeping bags. I was there when Fred rode up on a rickety bicycle. He had been beaten up a few days before, and had a cut above his left eyebrow and a slight limp. As his story came out, I learned that his wife had left him eight years ago. Six months later, Fred hit the bottle. He soon lost his business, as well as his children.
At the end of this story, Fred’s eyes were moist. I asked if I could pray for him and he went silent, then he wandered off a distance. I worried that I had offended him. But then he signalled me to approach and shocked me with a direct question: “Do you think God loves me in spite of all I’ve done wrong?” I told him without hesitation, “God loves you as much today as he did 10 years ago.” We wept together and prayed.
The leader as host creates a welcoming space where people can be vulnerable and share their sense of confusion and anxiety. In Living Gently in a Violent World, theologian Stanley Hauerwas quotes Paul Virilio: the dominant form violence takes in modernity is speed. He writes, “Gary was… mentally disabled. Gary also read Scripture [in the gatherings]. It would take a long time. But for the church to learn to wait for the lesser member to speak is to witness to the world a different way of living.”
To be human is, by definition, to be incomplete and in process. It’s a messy, risky venture. Therefore, leaders must create space for risk and vulnerability. We find community – real belonging – when we admit our weakness and need for one another.
Margaret Wheatley writes that the world “doesn’t change one person at a time. It changes as networks of relationships form among people who discover they share a common cause and vision of what’s possible.” This dynamic is at the heart of the Anabaptist vision, a communal vision formed around the coming of God’s kingdom. The path forward is that of weakness, and the leader of the future is one who models hospitality.

Len Hjalmarson is a writer, teacher, and software developer living in Kelowna, B.C. He is co-editor of Fresh & Re:Fresh – Church Planting and Urban Mission in Canada Post-Christendom and is director of spiritual formation with Forge Canada. 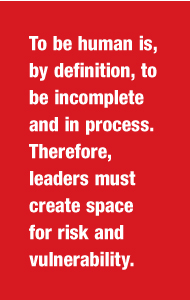 The place of here in following Christ

“My church meets just down the road…”

Discipleship on the road