What's New
Delete or not to delete, that is the...
Believers bring water for drought baptism
Encouragement to those in the arena
Keeping attention and making an impact: A few...
Open hands to reconciliation
From the editor
Approaching truth and reconciliation with love in our...
MB Seminary offers new MA in Transformational Leadership...
Multiply August Ukraine Updates
Book Review of Return Stroke: Essays & Memoir...
Home News Kidnapped: Vlad’s story 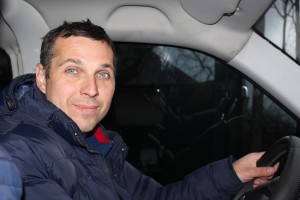 Vlad Makhovskiy, a volunteer with MCC partner Zaporizhzhia Baptist Union, has helped more than 150 people escape from eastern Ukraine. Makhovskiy helps deliver food assistance and blankets to those living in the conflict areas.

When war broke out in eastern Ukraine Vlad Makhovskiy decided he could not just sit at home and watch what was happening. He would help. What he did not know was this choice would eventually lead to his kidnapping.

Makhovskiy, who runs a small business copying keys and fixing shoes for people, is one of many committed volunteers working with MCC partner Zaporizhzhia Baptist Union to deliver relief supplies to eastern Ukraine and transport people to safety. He has helped more than 150 people escape from the conflict areas—mostly families and elderly people—all with little more than his van.

During one of these trips he planned to help ten people leave Krasnyi Luch. He was not worried, because he had moved people from the area before and the Ukrainian military assured him the territory was neutral. But when he was stopped at a separatist checkpoint the soldiers searched his van and called for back up. “I told them, ‘I am a volunteer. I am a believer—I believe in Christ,” he said. “I am helping people to leave this war zone.’”

Makhovskiy was arrested and put in prison for six days. During this time he says he was interrogated, mistreated and threatened with death. He was moved from compound to compound, not knowing when, or even if, he would be released. But one day, he was. Near the end of his imprisonment a soldier approached him and told him to move quickly and quietly to a nearby car. Here he met the woman who would save his life. She heard his account and persuaded several guards to release him. 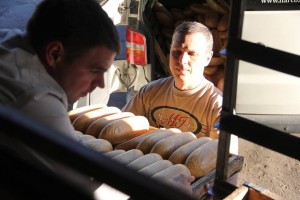 Makhovskiy remembers every detail of the day they let him go. They pointed him in the direction of the Ukrainian army and opened the car door. He stumbled into the sunlight and walked to safety, praying loudly as he went. This experience did not dissuade him from continuing to help those in the war-torn areas of Ukraine. If anything, the experience strengthened his resolve.

Two weeks after his release Makhovskiy was back to delivering relief supplies and transporting people. “These six days changed me a lot,” he says. “I still have scars on my body where they tortured me, but my faith in God grew and my heart belongs to God even more. Now I want to serve God the rest of my life.”

MCC is grateful for volunteers, such as Makhovskiy, who work with our partner organizations.  Along with Zaporizhzhia Baptist Union, MCC works with partners Nikopol “New Life,” Zhytomyr Regional Charity Fund and Good Shepherd Shelter.

MCC is also thankful for a C$1 million contribution from the Canadian government for our work in Ukraine. Between March and August of 2015, the grant will provide 1495 families with a variety of humanitarian assistance including rent assistance, shelter repairs, and hygiene items. Food and social support are also provided through MCC.

There are 1.25 million people displaced within Ukraine and 834, 284 refugees in neighbouring countries, as of May 7, 2015, according to a report from the United Nations.

MCC continues to work to meet the urgent needs of people in Ukraine. Read more about our response here.