What's New
Through the conflict, life carries on in Ukraine
A FOCUS on Mission
Must Patience Be So Slow?
Harold Jantz: A Heart for the Mennonite Story
Lorlie Barkman: A Life of Creative Engagement
Last Days, First Days
Women in Ministry: Bertha Dyck
January Moment in Prayer “Holy Spirit—Fill Us!”
The Church as the Patient Body of Christ
Advent: Making Much of Jesus: Christmas Day
Home Arts & Culture New neighbours: Immigrant’s guide to Indigenous people 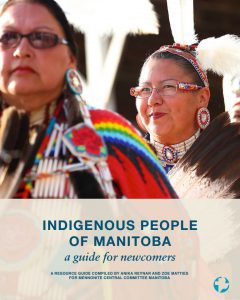 Indigenous People of Manitoba: A guide for newcomers
Compiled by Anika Reynar and Zoe Matties

“Newcomers to Canada have, unfortunately, picked up a lot of misconceptions and historical inaccuracies [about Canada’s Indigenous people],” says Vincent Solomon. As Indigenous neighbours coordinator for Mennonite Central Committee Manitoba, Solomon often speaks at events – many of them for newcomer groups – where he has observed these misunderstandings.

Inspired by this need for education, and following the example of the City of Vancouver’s “First Peoples: A Guide to Newcomers,” MCC Manitoba assigned two interns, Anika Reynar and Zoe Matties, to assemble an English-learner appropriate guide to the Indigenous peoples of Manitoba.

Reynar and Matties researched historical documents and solicited feedback from Indigenous leaders. A teacher with English as an Additional Language training edited the guide.

The 42-page resource includes a map of Indigenous communities in Manitoba (using native names), an introduction to the major groups in Manitoba (Cree, Ojibway, Oji-Cree, Dakota, Métis, Denesuline and Inuit) and references to further learning opportunities. The guide introduces the impact of the Royal Proclamation of 1763, the five numbered Treaties that affect Manitoba, the Indian Act of 1876 – and the way these documents were understood differently by the
government representatives and the Indigenous signatories.

It’s only an introduction, but Solomon “[hopes] this resource will enable newcomers to this land to learn more about its original peoples, and that it promotes dialogue and reconciliation.”