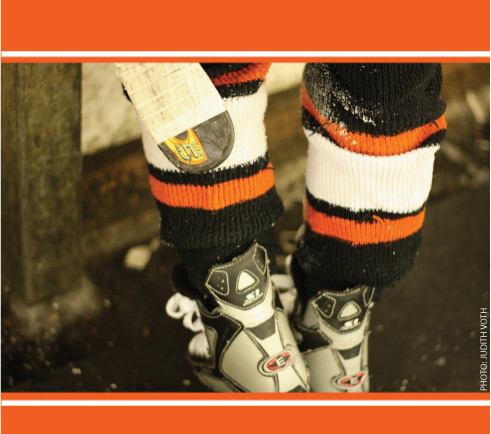 Once upon a time, my wife and I decided that our kids would not play hockey and, more importantly, that we would never be “hockey parents.” Hockey was expensive, brought out the worst in both kids and their parents, was expensive, unnecessarily violent, expensive, involved excessive amounts of travel and early mornings at frigid rinks… and was expensive.

No, our children would play soccer, swim, dance, or participate in some other less philistine sport while we, their parents, sat passively and non-confrontationally on the sidelines encouraging them to just “do their best.” And we would all mutually exult in the joy of participating in wholesome, non-competitive physical activity.

Our best intentions notwithstanding, Nicholas simply could not be dissuaded from his love for hockey. He enjoys soccer. He likes baseball and basketball. He has fun swimming. But he’s obsessed with hockey.

So this year, we finally acquiesced and enrolled him in organized minor hockey. Over the last several weekends, I’ve joined the legions of other Canadian parents who spend their Saturdays and Sundays traipsing off to the local rink to deliver their children to seemingly endless practices and games. I’ve sat through parent meetings where we discussed how to raise funds for track suits and practice jerseys (practice jerseys? for eight-year-olds?!). I’ve forked over money for uniforms and matching socks. The insanity has officially begun.

Yes, I’m becoming a hockey dad. I find myself leaping to the edge of my seat when my son completes a drill properly. I wince and look away when he turns himself into a pretzel and causes a pileup trying to transition from skating backwards to forwards.

I hear myself saying things like, “No, Nicky, that’s not how the coach explained the drill! Turn on your inside leg, not your outside.”

“Look where you’re passing. Keep your head up!”

“Do you have to leap, Ovechkin-like, into the glass in celebration when a puck dribbles in off your skate while the goalie is fixing his pad?”

“No, you’re standing at the wrong face-off dot! What are you doing?!” And so on.

Luckily, the above statements have remained mostly inner dialogue. But, yesterday, as we were walking out of the rink, it occurred to me that I have an awful lot of my own identity tied up in how my son performs with a stick and puck on a sheet of ice. I’m pained by his every mistake; I share his every elation. I agonize about whether or not he’s fitting in with his teammates. I wonder when, or if, his skating ability will catch up with those who have been playing for four or five years. In short, I’m doing what I swore I’d never do: living vicariously through my son.

But maybe it’s not such a bad thing. As I was sitting in church after hockey yesterday, I was reminded that there may be something of a theological analogy to being a hockey dad.

Just as my identity as a parent is tied up in how my son “performs,” so, in a more limited way, God’s identity is tied up in the performance of his image-bearers and of his church. God shares our pains, is delighted by our joys and successes, and is grieved by our disobedience and failure. When we do well, it looks good on God. When we don’t, it’s his name that is spoiled.

It may seem irreverent to say that God lives vicariously through his children, but maybe it’s not really. While God is not afflicted by the insecurities, neuroses, and misplaced ambitions of hockey dads, he does have a huge interest in how his children do. Do we play the game right? Do we follow instructions to the best of our ability? The answers to these questions say a good deal about us, but also about the God who we claim made us and whose purposes we claim to know something about.

God has given us a spectacular amount of freedom – probably more than we deserve or are capable of bearing. He has allowed us to make him look bad, and there’s no shortage of examples where we have seized this opportunity. But we can also make God look good. We can represent him well by being the best human beings we can be, to the glory of God.

–Photo: Judith Voth is an MB member who attends Winkler (Man.) MB Church. A hobby photographer and mother of three, she spends a lot of time at the hockey rink.
competitionhockeyJudith Voth
0 comment

When competition takes a toll

Coaching beyond talent and fame