What's New
Through the conflict, life carries on in Ukraine
A FOCUS on Mission
Must Patience Be So Slow?
Harold Jantz: A Heart for the Mennonite Story
Lorlie Barkman: A Life of Creative Engagement
Last Days, First Days
Women in Ministry: Bertha Dyck
January Moment in Prayer “Holy Spirit—Fill Us!”
The Church as the Patient Body of Christ
Advent: Making Much of Jesus: Christmas Day
Home Life & Faithfeature articles Helping each one hear

Helping each one hear 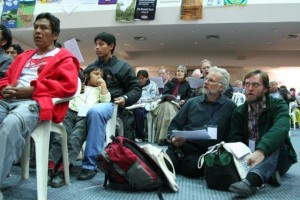 The dimly lit booth tucked into a balcony at the Centro Familiar de Adoración doesn’t hold much: a table and chairs, a pair of microphones, a bottle of water, a few sticky notes stuck to the window, a bilingual Bible – and Carmen Epp, listening intently through headphones to the sermon being delivered in Spanish down below.

Few are aware she’s there, but hundreds of English-speakers are depending on her ability to listen, interpret, and talk at the same time.

Epp is one of about 125 interpreters who volunteered to translate between Spanish and French, German, English, Portuguese, Nivaclé, Guarani, and Enlhet on stage, in the booths, and at workshops and meetings during Assembly 15.

“It’s a high calling, but also a very humble ministry,” Rebecca Yoder Neufeld says of the vocally and mentally demanding job. “If you’re doing the job really well you fade into the background.”

Yoder Neufeld, a Canadian born in France who’s familiar with all four MWC official languages, coordinated the interpreters for Asuncion and the last assembly in Bulawayo.

Asuncion was the first MWC assembly at which English was not an official platform language, which meant that many North Americans and English-speaking Africans and Asians were learning for the first time what it’s like to depend on headsets.

Close to 2,400 headsets were dispensed by young volunteers before each session.

But for Yoder Neufeld and Paraguay indigenous languages coordinator Jakob Lepp, the job began a year and a half ago, with recruiting, screening, and sometimes – especially for the indigenous languages – training volunteers who had never interpreted simultaneously before.

All went through an orientation first. “Part of the point of that, in addition to practical
suggestions, the ethics of interpreting and things like that, is trying to help people think about the meaning behind this task,” says Yoder Neufeld.

Hanging in the interpreters’ office was a colourful banner, reflecting the Pentecost story and Revelation – a multitude of tribes and nations and languages praising God.

“Language isn’t erased there, in that final picture of how God wants things to be,” Yoder Neufeld says. “What we’re aiming toward – these gatherings are a little glimpse. And we’re part of that stream of helping each one hear on his or her own terms.”