What's New
Through the conflict, life carries on in Ukraine
A FOCUS on Mission
Must Patience Be So Slow?
Harold Jantz: A Heart for the Mennonite Story
Lorlie Barkman: A Life of Creative Engagement
Last Days, First Days
Women in Ministry: Bertha Dyck
January Moment in Prayer “Holy Spirit—Fill Us!”
The Church as the Patient Body of Christ
Advent: Making Much of Jesus: Christmas Day
Home Life & Faithfeature articles Heard at Assembly 15

Lessons from a long ride 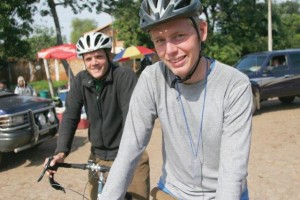 A young American duo, Lars Åkerson and Jon Spicher, spent six months travelling to Asuncion, Paraguay from Harrisonburg, Virginia – more than 12,000 kilometres through 12 countries – by bicycle. And everywhere they went, they said, they discovered “incredible hospitality” and “good.”

They would also get “much negative advice” about what lay ahead. Crossing the U.S.–Mexico border at “a highly volatile time,” for example, they found themselves suspicious of every movement. When someone in a white van followed them slowly, then offered a slice of delicious pizza, they said it “felt like a sign from God.”

It reminded them of the biblical text where the question “Can anything good come from Nazareth?” was given the answer “Come and see.” They too had to let go of prejudice and fear, to enter “the reputations of each area” and discover “Jesus is with us.”

Delightful, but difficult too

Outgoing MWC president Nancy Heisey of the United States modelled the diversity of MWC by beginning her keynote address (on Philippians 2:1-11) in Spanish, then telling a story in French before proceeding in English.

The mind of Christ is “a mind of giving up what could be ours,” said Heisey. We too are called to give away what might be ours, putting even our own history into question as we engage in “repentance and conversion.”

We may be delighted by our diversity, she said, but experiencing people who are different can be hard. So how do we walk together in the way of Jesus Christ? There is no resting place for expanding God’s love, short of God’s kingdom, she said.

This is what it means When Ishmael Noko expressed the “deep repentance and regret” of the Lutheran World Federation (LWF) about the “painful history” Lutherans and Mennonites share, especially the persecution and execution of Anabaptists in the 16th century, he did not spare his words.

“This history of condoning persecution,” he said, “is a spiritual wound we carry around in us.” He described the condemnations of Anabaptists, contained in the “anathemas” of the Augsburg Confession, as “the poison of a scorpion.”

He said, “We were wrong, regrettably wrong. Execution was not the only choice, even then.”
Assembly participants reacted to his honest, moving words by spontaneously rising and applauding. MWC president Danisa Ndlovu’s words in response were equally unsparing.

“What we witnessed today is a rewriting of our histories,” he said. “This is what it means to walk together in the way of Christ.”

Nothing is more damaging

“We will never be credible as peacemakers in a violent world unless, within our own Christian congregations, communities, and families, we make every effort to maintain the unity of the Spirit in the bond of peace,” said Chris Marshall, a professor at the University of Wellington in New Zealand.

“The oneness of the church is every bit as essential to the Christian faith as the oneness of God and the Lordship of Jesus Christ.” Nothing is more damaging to the cause of Christ, he said, than a divided church.

But the unity of the church “is not something we manufacture by being unusually nice,” Marshall continued. “It is something that already exists. It is an objective reality, brought into being by the Spirit of God.”

Listen to me carefully

One of the week’s most passionate sermons came from Nzuzi Mukawa, professor at the School of Missiology and pastor of a Mennonite Brethren church in Kinshasa, DR Congo. “We follow Jesus Christ, through the practice of social justice,” he said, speaking on Micah 6:1-8.

Often using the phrase, “listen to me carefully,” Mukawa rolled out a range of issues in which the church is called to “live justice.” He urged the church to ordain women, to accept minority group leadership, to “rise up and defend” children, to support women suffering from sexual violence, and to act on behalf of poor countries – by eliminating their international debt, by granting more access to trade, and by rich countries paying damages for pollution. 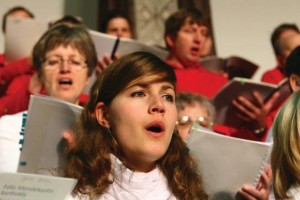 “We want you to know we are there, and we are part of the bigger church, and we want your prayers for the Mennonite Church in Cuba,” said Alexander Reyna Tamayo, the group’s president, during a workshop.

The Mennonite Church in Cuba was founded last August and now has about 150 members in 12 cell groups. It is expanding the Anabaptist faith tradition in Cuba, which began in 1954 with the Brethren in Christ, who now have 3,400 members there.

“Protestantism has grown more in the last 25 years than in the previous 100 years,” Raul Suarez, former president of the Cuban Council of Churches and a Baptist firmly committed to Anabaptism, said. “Cuba has experienced a revival of the spirit of God.”

Should we meet again?

In a workshop about MWC’s future, outgoing president Nancy Heisey of the United States and new president Danisa Ndlovu of Zimbabwe listed some benefits and costs of the assemblies.

Among the costs are the literal one of finances, Heisey said. After the 1990 assembly in Winnipeg, Man., MWC had such a large deficit it took years to dig out. She added that it’s complicated to get people together from around the world. About 200 MWC delegates to this assembly had their passports held by the Paraguayan ministry. Sometimes diseases are a problem, and few from the global South can afford to come.

The MWC general council will meet in 2012 in Switzerland, Heisey said, and make a decision about the next assembly. It will likely be in 2017 or 2018.