What's New
Abortion, the image of God, and faithful witness...
Choosing motherhood: The sacrifice of honouring life
MWC Assembly small but full of joy
Bad back doesn’t hold back MDS volunteer
Transition in CCMBC National Faith and Life Leadership
Leading through the trauma of covid: Part three...
The church distracted: When the main thing is...
Remote wilderness rescue turns into service with MDS...
How open is your mind?
Following Jesus together across barriers
Home Life & Faithfeature articles From every tribe, global church unites

From every tribe, global church unites 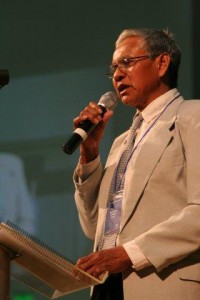 “Are you a Mennonite?” a policeman asked as Ditrich Pana approached the huge white church where 5,800 Anabaptists from around the world had gathered.

In Paraguay, Mennonites are known as fair-skinned, German-speaking farmers and ranchers who live in isolated colonies and produce much of the country’s cheese.

Pana doesn’t fit that profile. He is Enlhet, an indigenous group that – as much as it might surprise most Paraguayans – includes 6,000 Mennonites.

The Enlhet churches – and those of another indigenous group, the Nivaclé – grew from mission work by Mennonite immigrants of Germanic and Canadian background who made Paraguay their refuge from war and worldliness beginning in the 1920s.

Pana, a radio evangelist, told how he answered his uniformed questioner: “Through the Holy Spirit I said, ‘Yes, I am a Mennonite.’”

His story of claiming the Mennonite name as a label of faith rather than of ethnicity captured a leading theme of the 15th Mennonite World Conference assembly July 14-19.

In a sermon to the global Anabaptist gathering – which drew Mennonites and Brethren in Christ from 60 countries – Pana praised Christ’s power to bridge the world’s divisions.

“This gathering unites us with glad hearts,” he said. “We belong to each other and to him [God] this week as brothers and sisters and friends.” 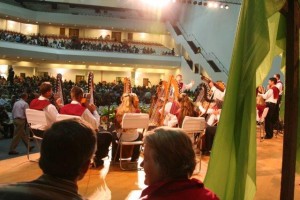 In that spirit of unity, Paraguay’s 32,000 Mennonites hosted a weeklong reunion of the .6-million-member global Anabaptist body.

MWC assemblies usually are held every six years but may be less frequent in the future.

They gathered twice a day in the Centro Familiar de Adoración (Family Worship Centre), a Protestant church with a three-level, 10,000-seat sanctuary in the final stages of construction.

For worship services, the “platform language” was Spanish, so English speakers and others listened to translators through headsets.

They heard sermons and Bible study messages under the theme, “Come Together in the Way of Jesus Christ” that emphasized living in unity and working for equality and justice, especially within the Anabaptist fellowship.

“Our conduct must reflect a change of thinking and attitude evidenced in how we relate to one another,” said Danisa Ndlovu, bishop of the Brethren in Christ Church in Zimbabwe and the new MWC president, on Saturday night.

“This is a clarion call for mutual respect, acceptance, and, above all, unity in the household of faith.”

Songs in the dark

During Thursday morning’s service, the windowless sanctuary went dark while Clair Brenneman of Palmer Lake, Colo., was telling about the building of Paraguay’s Trans-Chaco Road by Mennonite Central Committee Pax workers in the 1950s and early ’60s.

Songleader Paul Dueck of Canada and his team of musicians bounded to the stage and led the congregation in familiar songs in several languages until power was restored.

On Wednesday morning, a poignant moment with historic overtones occurred when leaders of two global church bodies affirmed the healing of centuries-old wounds. 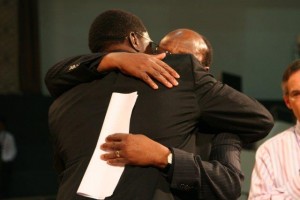 Lutherans’ persecution and execution of Anabaptists “is a wound we carry with us,” Noko said. “When you meet for your next assembly, we hope to be with you in a new relationship.”

Remarkably, Noko and Ndlovu are both from Zimbabwe.

Another gesture of reconciliation took place Sunday morning when Helmut Isaak of Paraguay read a statement of forgiveness to the man who killed his brother.

“More than 50 years ago, your clan and tribe were resisting us, but now we aren’t enemies anymore but brothers in Christ,” Isaak said to Jonoine, a chief of the Ayoreo tribe.

The chief came to the stage carrying the spear he used to kill missionary Kornelius Isaak in 1958.

About 8,500 people attended the Sunday morning service. Local Mennonite churches were closed and encouraged their members to participate.

In addition to worship services, two workshop sessions were held each afternoon of Assembly 15 on topics such as violence against women and children in Congo and the shared convictions of global Anabaptists. 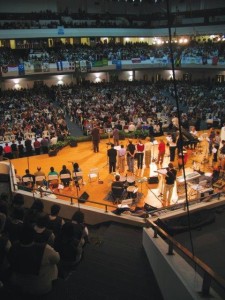 Special-interest groups, such as women theologians from Africa and Latin America, held meetings.

Many conference participants spent their free time at the Global Village, an outdoor area featuring displays organized by continents.

Global Village visitors stood in long lines to buy ice cream from Lactolanda, a Mennonite-owned dairy, and ate it with tiny spoons while listening to music at the outdoor stage.

Meals were served in the church’s underground parking garage. 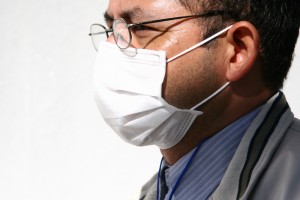 Due to health concerns, especially the need to guard against the H1N1 (swine flu) virus, some conference participants wore cloth masks over their mouths, and volunteers sprayed disinfectant on people’s hands before meals.

Activities for youth, including music and sports, took place in the “Teen Zone,” a fenced field across the street from the church.

Before the assembly, a Global Youth Summit on July 10-12 drew more than 700 participants, including 48 delegates from 32 countries. MWC’s governing body, the General Council, also met before the assembly.

The words of a young Nivaclé woman may have summed up the week for many.

“I learned that God has different gifts for each of us,” said Mirta Perez of Paraguay, reporting on the Global Youth Summit during a worship service.

“My dream is that the Mennonite family can remain in unity, because before God we are all the same, we are all valuable.”