What's New
Delete or not to delete, that is the...
Believers bring water for drought baptism
Encouragement to those in the arena
Keeping attention and making an impact: A few...
Open hands to reconciliation
From the editor
Approaching truth and reconciliation with love in our...
MB Seminary offers new MA in Transformational Leadership...
Multiply August Ukraine Updates
Book Review of Return Stroke: Essays & Memoir...
Home News Five years after the Haiti earthquake

Five years after the Haiti earthquake 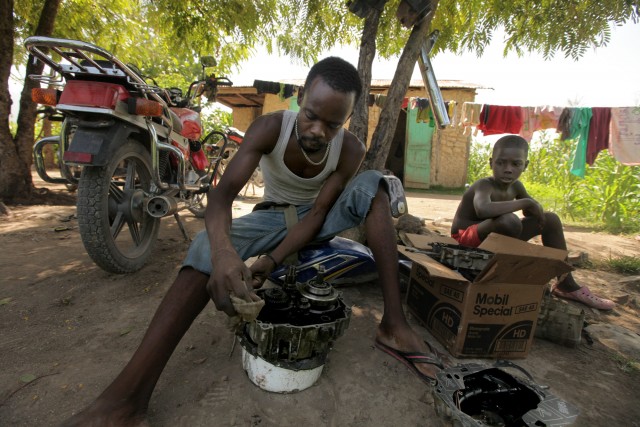 Dieunold Sterling works on a motor at his motorcycle repair business in Desarmes, Haiti, as his nephew Dumas John watches. The advanced mechanical skills he learned at a vocational school that MCC helped re-energize, allowed Sterling get an education and develop a business in his hometown without going to overcrowded Port-au-Prince. (MCC Photo/Silas Crews)

In Cabaret, Haiti, 39 kilometers outside the capital city of Port-au-Prince, breezes flutter the sheer fabric hanging in the doorway of Gladys Joseph’s new home. There’s room in the yard for her children to play. And, for the first time since she was sent to Haiti’s capital city as a child, she has a garden – corn, beans, manioc and okra.

Five years after a devastating earthquake tore across Port-au-Prince and surrounding towns, Mennonite Central Committee (MCC) has spent $16.9 million to help Haitians recover. An additional $2 million is allocated for earthquake recovery projects in 2015 and beyond.

Even as aftershocks rippled, MCC’s Haitian partners and others in local non-profits and government called for a broader response outside Haiti’s overcrowded, sprawling capital.

They pointed to the inadequate housing in the city and lax building standards that compounded the tragedy– and the lack of opportunity in the countryside that led so many to Port-au-Prince in the first place.

MCC, with decades of experience working in Haiti’s rural Artibonite Valley, responded– dedicating more than half its earthquake response funds to projects in education, livelihoods, housing, water and agriculture there and in other areas outside the capital.

In Cabaret, MCC and local partner Christian Center for Integrated Development used support from the Canadian government through the Department of Foreign Affairs, Trade and Development Canada (DFATD) to build a village with 100 homes, a market, playground and community centre. 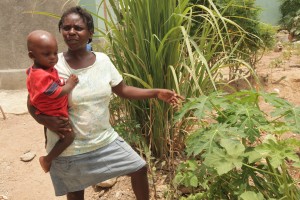 Gladys Joseph, who holds her one-year-old son, Jean Pierre Romain, especially loves the opportunity to grow plants and vegetables in the yard of her new home, one of 100 homes in Cabaret, Haiti, that MCC helped fund after the 2010 earthquake. Before Joseph moved to her own house, she and her husband and children lived with friends. (MCC Photo/Silas Crews)

Joseph, who lost her rented home in Port-au-Prince in the earthquake, recalls what a relief it was to no longer impose on friends, or rear children in a space that was not her own. “When you stay with someone else, it’s like being humiliated. Your kids can’t play, can’t make noise, can’t run,” she says.

At her new home in Cabaret she has a cistern to capture rainwater for cooking, bathing and washing clothes. In addition to vegetables, she grows cherries, papaya and citronelle for tea in her garden.

Thanks to classroom studies and practical training in mechanics at the school that was re-energized through MCC and a grant from DFATD, 28-year-old Dieunold Sterling can now complete complicated repairs he once would have had to turn down.

It’s a change that boosts his income and opens opportunity for his family.

“We eat better is the first thing,” he says. He has easier access to credit to help pay off professional school debt and pay school fees for his oldest child.

And through his studies, his vision grew for a future in his hometown, not Port-au-Prince.

He dreams of a full-service garage and a shop selling parts and maybe eventually new motorcycles, which people drive to other towns to buy.

What he’s done so far, he says, is only the beginning. “I’ve got a shop here, but I want to have an enterprise.”

Learn more about how MCC’s Haiti earthquake response at mcccanada.ca/haitiearthquake.

6,344 people received cash transfers or were part of cash-for-work projects