What's New
Ask God which town
Where to from here?
CCMBC National Director attends 2022 ICOMB Summit
MCC Canada and MCC Manitoba sell shared property...
The world appears to be growing darker
Sharing a new and unified language
6 reasons to attend the MWC Global Assembly...
One too many
Just one more
A safe place in Winnipeg
Home MB HeraldHomepage Fighters, refugees seek peace at home in Rwanda 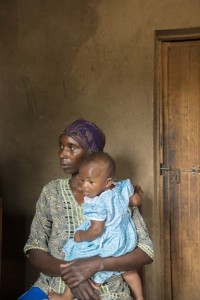 Mwasa Niyon Senga felt trapped as a first sergeant in the Democratic Forces for the Liberation of Rwanda (FDLR), an armed group that terrorizes villages in the eastern Democratic Republic of the Congo.

As a Rwandan soldier during the 1994 genocide, he feared he would be arrested (and probably killed) as an enemy of the state if he returned to Rwanda from DR Congo. He fled to DR Congo during the genocide as soldiers for the current government took control of Rwanda.

In DR Congo, he believed other FDLR combatants would kill him if he defected.

He had survived as a refugee in Congo for almost 18 years as an FDLR soldier and officer, but he was tired of hunger, sickness and constant war. He didn’t have anywhere to go.

His wife Nyasa Icyimpaye Cecile, too, was tired of being constantly on the move.

“Life in the forest was very, very difficult. I gave birth several times in the forest. There were times when I gave birth one day and the next day I put one (child) on my back and walked two to three days without anything to eat or drink to escape the Congolese army.” (She is holding her granddaughter, Sandrine Furayabo.)

Cecile felt trapped because many people had assured her she would be killed if she returned to Rwanda.

Enter Emmanuel Billay. Since 2007, he has been coordinating a project to reduce violence in North Kivu, a province in Eastern Congo, by helping Rwandan refugees, including combatants like Senga, return safely to life as a civilian in Rwanda.

Billay is the North Kivu supervisor of Program for Peace and Reconciliation (PPR), an MCC partner, which has helped more than 1,900 combatants and 22,500 civilians return to Rwanda. PPR is a program of the Church of Christ in Congo, a protestant organization made up of 19 denominations.

“When you repatriate people, especially combatants, it helps Congolese in the surrounding area feel less frightened. If there are fewer combatants in the area, people will feel safe to go further into their fields to cultivate and in that way you bring more peace and more prosperity,” Billay says.

Here’s how it works: PPR, with support from MCC, hires local people called animateurs, including pastor Shombo Munya Rukenoa of Minova to seek out refugees – wherever they are – and let them know that they can return to Rwanda without retribution (unless they are wanted for international crimes).

Pastors are especially effective as animateurs, said Billay, because Rwandans, even combatants, trust what pastors say much more than they trust representatives of the United Nations or the Congolese government. The animateurs are assisted by hundreds of volunteers PPR has trained to share the repatriation message with Rwandan refugees they encounter.

So when Pastor Rukenoa learns about refugees in the mountains around his church, he sets out on his motorcycle or by foot, with just a Bible and some flyers in his backpack. Sometimes the trips take several days, especially if he has to go far into the mountains, but he doesn’t worry about food, water or lodging. He knows how to find water in the forest, and as a pastor, he can usually find food and lodging at churches along the way.

“It’s written in the Bible that Jesus is the Prince of Peace. The Bible also says happy or blessed are the peacemakers,” Rukenoa says. That’s why he works for peace.

Earlier this year, Pastor Rukenoa met with this Rwandan family – Ruboneka Isa and Estella Uzamukunda and their children Bahati Mwingabire, 4, and Diane Mwingabire, 18 months. The parents are civilian refugees who are day labourers. They rent a bit of land to grow some vegetables. “A good day is when I can work, earn 1,000 francs ($1.08) and have something to eat at the end of the day,” Uzamukunda says.

“I felt good and comfortable, as a refugee, about the consideration the pastor had to come and visit me,” says Isa. “It was the first time anyone had come to me and said I could go back to Rwanda.”

Isa is eager to go to Rwanda. In spite of the good relationships he has in the Congolese village where he has lived for the last 20 years, it has never felt like home. “Someone’s home is someone’s home. Even if you live in a foreign country for 20, 30 or 50 years, you are still a foreigner.”

When the family has harvested and sold their vegetables so they have cash to take home with them, they will walk to Pastor Rukenoa’s church. If needed, they will stay in the church’s transitional housing where Billay is standing. Pastor Rukenoa will record identifying information needed by Congolese officials and PPR. If the church has food or clothing, the pastor will give it to them and other refugees before the three-day walking journey back to Rwanda.

Their next stop will be this transfer site in Kalungu, where a Congolese immigration official registers the paperwork and turns refugees over to staff from the United Nations High Commission for Refugees, who will escort them back to Rwanda. The UN agency gives the family money, housewares and some cash assistance to help them resettle.

Combatants go through a different process because they have to escape from their units to return to Rwanda. Although PPR has relationships with militia commanders who have given PPR permission to help their soldiers repatriate, in reality the men risk their lives if they decide to leave.

Senga knew the risks of defecting, but when Pastor Sango Lukumu, another animateur, came to the FDLR camp that Senga managed in 2011, he let the pastor talk to the troops. Pastor Lukumu was respected as an international evangelist and a local pastor.

Senga remembers the pastor saying, “You children are malnourished. If you go back to Rwanda, there’s peace there…. Your children will have something to eat.” He assured the men that the Rwanda government would allow them to return safely.

Senga liked what he heard and he arranged to send his family home. Pastor Lukumu met Cecile and her children in secret and gave them food and clothing provided by MCC before taking them to the transfer station. “My children were half naked,” she said from her home in Rwanda in March 2015, “but the aid arrived just at the moment when we felt the neediest. God bless these people who donated.”

A month later, Senga ran away from camp to meet Pastor Lukumu. “I left at night and walked 24 hours to get to that meeting place. There were many rivers to cross…. I remember being frightened that I would run into FDLR or Congolese soldiers. After I met pastor Sango (Lukumu), we walked through the forest all day to Sango’s home and then another 50 kilometers to the town of Mwenga.”

Because of fighting in the area, MONUSCO (the United Nations forces in Congo) sent a helicopter to get Senga to Rwanda. He spent several months in a Rwandan government camp to prepare him to re-enter Rwandan society.

Senga and Cecile were reunited in March 2012 and now live with their children in Senga’s father’s house. Life hasn’t been easy in Rwanda either. Senga farms on bits of rented land that he can plant and cultivate. Cecile works in the fields too. They have difficulty getting food, clothes and school supplies, Senga says, but all their younger children are in primary school, and they live in a house, not under trees.

“Rwanda is a peaceful country. You can’t wish to be back in the forest, even if there are difficulties here,” he said.

Cecile now has her first grandbaby, which seems to help ease the memories of difficult times in the forest. “I am elderly, but I hope my granddaughter can study and have a good life in the future.”