What's New
Through the conflict, life carries on in Ukraine
A FOCUS on Mission
Must Patience Be So Slow?
Harold Jantz: A Heart for the Mennonite Story
Lorlie Barkman: A Life of Creative Engagement
Last Days, First Days
Women in Ministry: Bertha Dyck
January Moment in Prayer “Holy Spirit—Fill Us!”
The Church as the Patient Body of Christ
Advent: Making Much of Jesus: Christmas Day
Home Life & Faithfeature articles Confronting an insidious crime 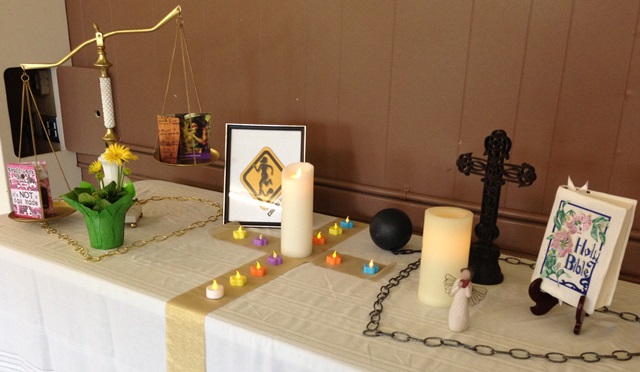 “If I don’t share my story, nobody’s going to know what’s happening in our world,” says Shannon Lynn, a speaker at the Caught in Traffick conference hosted by the Women’s Inter-Church Council of Canada at Canadian Mennonite University, June 21–23, 2013. Attendees learned that Canada is a source, transit, and destination country for human traffickers, and left feeling motivated and equipped to counteract human trafficking.

Lynn was one of hundreds of young women and men who are trafficked in Canada. A child who “fell through the cracks” of society, Lynn became a sex trade worker at 15. For 20 years, Lynn found herself ensnared in the trap of the sex trade because the physical abuse she suffered would have only worsened if she didn’t do as she was told.

The Royal Canadian Mounted Police defines human trafficking as “the recruitment, transportation, or harbouring of people for the purpose of exploitation through the use of force, coercion, fraud, deception, or threats against the victim or a person known to them.” 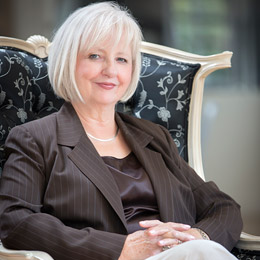 Member of Parliament (MP), Joy Smith, explains that a trafficked person can bring in revenue of $250,000–$260,000 a year. Smith, who attends Eastview Community Church in Winnipeg, has worked fervently to stop human trafficking in Canada since becoming an MP in 2004.

“It’s an insidious crime,” says Smith; “it’s a manipulative and deceptive crime, and it’s a crime that should not be happening on Canadian shores.”

Conference speaker Dianna Bussey, chair of the Salvation Army territorial anti-human trafficking network, challenges people to think about what would happen if the sex trade didn’t exist. If there was no demand for the sex industry, would women, men, and children still be trafficked?

Portrayals of women as sex objects in the media and in pornography and the fact that sex sells in society are two of the reasons human trafficking exists. Bussey says we must address the existence of the sex industry before we can eliminate exploitation of trafficked persons.

Key initiatives can prevent and reduce demand for the sex trade: education for children and young adults about sexual exploitation, comprehensive awareness campaigns, and appeals to men delivered by men to address the causes of demand. “Until men look down on other men for doing this, it will not stop,” says Bussey.

Smith agrees that targeting predators, not victims, of the sex trade industry is vital. Two types of predators exist – those who want to buy sex and those who arrange for the sale of sex. “It’s just what they call their business,” Smith says of the latter. But “it’s not a business, it’s a crime. And it’s a crime against humanity; it’s a crime against women. So I want to go after and target the market and that’s what I’m doing right now.” She hopes to see a “made-in- Canada Nordic model” – one that penalizes the predators, not the victims – that would target and ultimately remove the market for the sex trade. 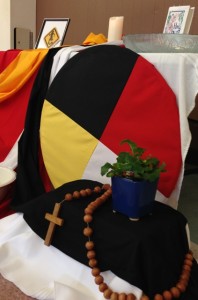 Smith has been instrumental in the creation of human trafficking laws in Canada. In 2009, Parliament passed Bill C-268, An Act to amend the Criminal Code (minimum sentence for offences, involving trafficking of persons under the age of eighteen years).

Smith draws on her faith to both inspire and sustain her. “What I found out in this issue is that the Christians are really being called on to take a stand against human trafficking. And I feel very honoured that I’m able to be a part of this, however dark and however hard it’s been. My faith sustains me through all of this.”

Opening remarks at the Caught in Traffick conference were based on Genesis 1:27 which reads, “So God created human beings in his own image. In the image of God he created them; male and female he created them” (NLT). Human trafficking – treating men and women as commodities to be bought and sold – denies the image of God in people.

Shona Stewart, a former sex trade worker, says, “If not for Jesus Christ, I wouldn’t be standing here today.” Drawn into the sex trade by the allure of making money, she explains that a tough childhood, low self-esteem, and a search for personal identity contributed to her decision. 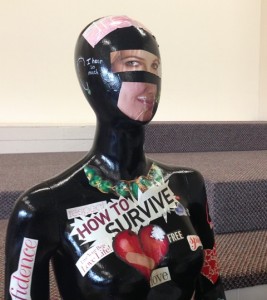 Images and words on this mannequin convey realities for those caught in the sex trade.

After 16 years, Stewart was able to escape. Through an Alpha program, she became a Christian, went on to earn two degrees from Briercrest College and became pastor of women’s outreach at Cornerstone Alliance Church in Winnipeg.

Stewart identified a lack of safe and stable housing as one of the biggest challenges women face when they leave the sex trade. In September 2012, she opened Dignity House, a second-stage home where women can learn “life skills to enable them to live healthy, wholesome lives” in a faith-based context.

Smith is fond of this challenging quote by William Wilberforce: “You may choose to look the other way, but you can never again say that you did not know.” Lynn, who shared her story publicly for the first time at Caught in Traffick, agrees. “The only way [the cycle] will stop is to bring awareness,” she says.

Conference participants were visibly moved by Lynn’s bravery and reminded that each of us is made in the image of God. have experienced this injustice demonstrate that the issue is complex, the scale massive, and the challenges many. It’s clear that the scars left on those who are trafficked are deep and long-lasting; they provide reasons for us to address human trafficking.

By using tools learned at events like Caught in Traffick, spending time in prayer, and dedicating time and energy to the cause, we can begin to make a difference. Through our combined actions, we can hopefully make Lynn’s dream come true and put an end to the cycle of human trafficking once and for all.

—Ellen Paulley is the communications coordinator for the Canadian Conference of MB Churches.

What you can do

Addressing human trafficking requires both spiritual and practical measures. Everyone can become involved.

Gaps exist in the number of resources available to support those who wish to leave the sex trade. One way Christians can promote the image of God each person bears is by supporting organizations, like Dignity House, the Salvation Army, and the Joy Smith Foundation,* that provide resources such as housing, vocational training, and counselling for those who exit the sex trade.

Pay attention to your neighbours.

Indicators a person might be trafficked include: she is escorted or watched, he does not speak on his own behalf, she does not have identification, and he lacks private space or personal property. If you see or know someone whom you suspect might be trafficked, contact your local police.
Learn more. To act on such a complex issue, one has to know that it exists. Attend conferences or workshops, and listen to the stories of people like Stewart and Lynn, who have been directly affected by trafficking.

Invite your faith community to learn about and address human trafficking by using resources like Human Trafficking: A Report on Modern Day Slavery in Canada produced by the Evangelical Fellowship of Canada and Human Trafficking in Canada: A Leadership and Learning Kit for Churches produced by The Canadian Council of Churches.

One of the greatest resources Christians have to combat evil is prayer. “We have an awful lot of power through prayer,” says Smith, quoting 2 Corinthians 4:8: “We are pressed on every side by troubles, but we are not crushed. We are perplexed, but not driven to despair” (NLT).

*The Joy Smith Foundation, launched in October 2012, “works to ensure that every Canadian is safe from manipulation, force, or abuse of power designed to lure and exploit them into the sex trade or forced labour.” The Foundation has raised approximately $140,000 to date, all of which has been distributed to organizations that work on the frontlines to rescue and rehabilitate victims of human trafficking.

A message from International Justice Mission

Thank you so much for this article. It was really well done and will hopefully spread some awareness. I’m planning an evening to raise awareness of the problem at the end of November in Toronto.

Hi Christy. Thanks for your comment. If you let us know about the date and location of your awareness event, we’ll post it on our calendar. ~Laura Kalmar