What's New
Boldly advancing the gospel from our knees
MCC sends food and relief to Cubans in...
Robert Dagenais, pastor of the Sainte-Thérèse church, is...
More donated hay needed to help farmers in...
“God’s time was perfect”
Hope and pray every day
Resilient Leadership: The gift of self care
Project Redemption
Blue Christmas
“Repent, for the kingdom of heaven is near.”
Home News Balcony collapses at Camp Peniel 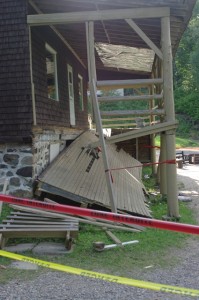 On July 28, a balcony collapsed at Camp Péniel in Wentworth-Nord, Que., resulting in minor injuries, including several sprains and one broken ankle, to 20 of the 58 people taking shelter on it at the time. A Montreal church was conducting an afternoon baptism at the camp when rain began, leading attendees to crowd onto the covered balcony of the lodge building.

Director Jason Levesque says the incident happened at the best time to cause the least disruption since it occurred at the start of a week without organized camp programming. The camp remains open; however the lodge is closed for security reasons. Subsequent weeks’ activities were re-located to other buildings on the grounds, such as the cafeteria.

At press time, insurance claims for loss of work due to injury were still being assessed. The release of the government building inspector’s report on the cause of the collapse and state of repair of other buildings on the premises was also pending.

Once the inspection report is completed, the camp will require not only repairs to the balcony, but also renovation and upgrades to other buildings on the campus. “We will need a lot of help; it’s an old camp,” says Levesque who is trained as a carpenter. Fundraising and reconstruction plans will take shape after the report’s release. Overall, he says the engineering and safety inspections resulting from the incident are “positive for everyone’s safety at the camp.”

“We know that a lot of other MB camps and churches across Canada were praying for our team; we were really glad for that,” he says. “We felt a lot of support.” 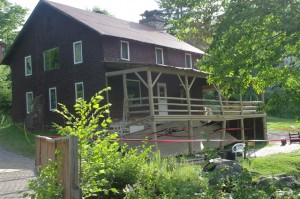 Camp Péniel is a retreat centre and camp founded in 1974 by the Mennonite Brethren church in Quebec (AEFMQ). Its mission is to offer a place of rest and spiritual renewal.

—Karla Braun, with files from Ellen Paulley, communications coordinator for the Canadian Conference of MB Churches.