What's New
Leading through the trauma of covid: Part two...
Ask God which town
Where to from here?
CCMBC National Director attends 2022 ICOMB Summit
MCC Canada and MCC Manitoba sell shared property...
The world appears to be growing darker
Sharing a new and unified language
6 reasons to attend the MWC Global Assembly...
One too many
Just one more
Home Life & Faithfeature articles A means to an end

A means to an end 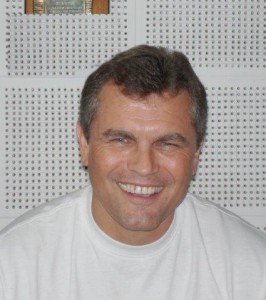 Living – and teaching – across cultures in Paraguay

The students of Instituto Biblico Asuncion (IBA) were on their mid-term break, but July offered little respite to the school’s director, Martin Hartwig Eitzen.

He presented a paper at a consultation of Anabaptist theological educators held in advance of the Mennonite World Conference global assembly in Asuncion. Then came the five-day MWC gathering itself.

Before this was over, Eitzen’s mother, terminally ill with cancer, died. He and Betty and their three sons drove to the Chaco, some five hours north of the capital, to be with their extended family.

Back in Asuncion after the funeral, there was work to do for an upcoming move into another house, and preparations too for Eitzen’s trip to Chicago the following week, where he would present at a conference at his alma mater, Trinity Evangelical Divinity School.

But, this being Paraguay, there was always time, no matter how busy the schedule, for tereré (cold) or maté (hot) – a tea drunk as an infusion of water over dried yerba leaves, sipped through a metal straw (pictured right), and usually shared communally.

It was over numerous rounds of this delicious, grassy-flavoured brew that I spoke with the IBA director. We discussed the events of the past weeks, his passion for education and mission, and the challenges – and joys – of being “at home” in more than one culture.

(I should note, by way of of full disclosure, that Eitzen is my nephew through my husband’s family. This was not the deciding reason for my interest, but it certainly facilitated an interview, since I stayed with the Eitzen family the night before my return flight to Canada after Assembly 15.) 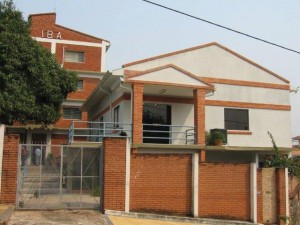 Eitzen was born in 1966 in Fernheim Colony, and was given the name Hartwig. His parents were children of Russian-German Mennonites who fled the Soviet Union’s communist regime to find refuge in the new Mennonite settlements of the Gran Chaco region of Paraguay.

After high school he attended Bible school in Buenos Aires. He married Betty Bartel in 1989, then completed a master’s degree, also in Buenos Aires, at the Baptist seminary. In 1992, the couple settled in Asuncion, where Eitzen taught at IBA and the adjoining Albert Schweitzer School.

In 1998, the family moved to Fresno, Cal., where Eitzen did a second master’s degree, in New Testament, at MB Biblical Seminary. Fascinated by cross-cultural dynamics, he explored for his thesis the biblical principles of such communication found in Paul’s four speeches recorded in Acts. He discovered that Jesus’ resurrection, not his death, was at the core of these speeches.

The next stop, in 2000, was Chicago, where Eitzen, who “was always interested in mission,” began a PhD program in intercultural studies at Trinity Evangelical Divinity School. He was one of many students who went to Trinity because MB missiologist Paul Hiebert taught there, and one of the last, he notes, who wrote his dissertation under Hiebert’s “watchful eye.”

This dissertation was titled “Dependent, independent, interdependent: a case study in mission partnership,” and looked at the changing relationship between the Mennonite Brethren Spanish conference of Paraguay and the North American MB mission agency.

Completing his doctoral work in 2003, in almost record time, Eitzen returned to IBA to teach. In 2004, he became the school’s director.

Someone said, “It sounds like Martin.” So, Hartwig began to be Martin. In 2005, he added it legally to his name.

“When did the name change, Saul to Paul, happen?” Eitzen asks, as an aside to his own story. It was not at conversion, as often assumed, but “when he first stepped into the mission field. Saul was too Hebrew for the Greeks.”

A related concern about names, for Eitzen, is the way people in his country are commonly placed, even by mission leaders of his own German Mennonite group, into three unparallel categories: Mennonites, Paraguayans, Indians.

“It’s an uphill battle,” he admits, “to get it out of people’s minds that Mennonite is ethnic.” Eitzen says it’s one reason it was so good to have the Mennonite World Conference in Paraguay.

It’s a debated issue in Paraguay, as in North America. Some Paraguayan Mennonite leaders propose that the word Mennonite be retained as an ethnic category and another word found for religious affiliation.

Eitzen disagrees. “We have to write a sociology for Paraguay,” he says. He suggests the term given Brazilian immigrants in Paraguay, Brasiguayos, could be adapted for other groups – Aleguayos (German Paraguayans), Espaguayos (Spanish Paraguayans), and so on. One of the first things he does with his students, he says, is help them think more accurately about their terms of identity.

He and Betty are “living bi-culturally,” Eitzen says, and their sons are “third culture kids.” He “loves” and is at home in, his original Russian German Mennonite culture, but he is also at home in the majority Latino culture of the city.

Cultural differences present them-selves in many aspects of life, he says, but the key is to “live intentionally and not complain.”

The couple served a small Spanish-speaking Mennonite Brethren Church, Iglesia Christiana de la Paz, for ten years, but since last year have been part of the German-speaking Concordia MB Church, where Eitzen participates in the leadership team as mission pastor, relating to four daughter and two granddaughter churches. They made the change when their oldest son, Haiko, was baptized there.

The challenges of living interculturally and missionally in a country with cultural diversity as well as great extremes in education and economic levels, are particularly felt in a school setting.

Instituto Biblico Asuncion was founded in 1964, and is a partnership of the two Mennonite Brethren conferences in Paraguay – German and Spanish. Almost all the pastors in the 50 Spanish MB churches have been trained at IBA, Eitzen says, and increasingly, German-speaking churches, which earlier may have encouraged training in Germany or Switzerland, are sending young leaders there.

The school’s language is Spanish and its faculty is strong, with four of the seven professors holding doctorates.

For several decades, missiology has emphasized “contextualization.” The recent Anabaptist educators consultation looked for “common ground,” however, or a “meta-theology” that holds it all together “beyond cultural identities.” Eitzen describes this approach to theological education as consisting of “unity in theology, locality in content, and liberty in methodology.”

What is required above all, whether in life or in teaching, he says, is “cultural and theological honesty.”

Since 1994, Instituto Biblico Asuncion, as well as the Mennonite Church-sponsored school CEMTA and a Baptist training school, have been part of the School of Theology of the Evangelical University of Paraguay. “On paper we’re one, with different campuses,” Eitzen says.

IBA has experienced significant growth, doubling in number the last six years. Eitzen’s goal was to reach 100 students by 2009 and he kept praying, “You [God] put it on my heart and I said it aloud – so, for the sake of your name!”

That goal was reached this year with 102 students, and the school is running out of room. But “it’s a nice problem to have,” Eitzen says.

Twenty percent of the students are from the German MB conference, 41 percent from the Spanish MB conference, and 39 percent from other denominations. This year there are also students from Peru, Brazil, Uruguay, USA, and Switzerland, and one student from the Nivaclé, an indigenous group of Paraguay. In the last six years there have been students from Argentina, Colombia, and Mexico as well.

There used to be a certain amount of cultural tension in the school, he says, illustrated at its most obvious by conflict over sports. The German Paraguayans wanted to play volleyball, and the Spanish Paraguayans soccer. They would even steal the other’s ball. Interestingly, when the student body became more international, the polarization ended. (There are separate evenings scheduled now for both sports.)

Eitzen says he wants “to transmit a contagious Christian life.” The changes he sees in students, who will go on to motivate their churches and pastors, give him joy and hope in his work.

But education is “a means to an end,” he says as our morning maté ends.

Although current estimates put the number of “believers” in Paraguay at less than 10 percent of the population, Martin Hartwig Eitzen’s life goal is to see this rise to 20 percent.

And he has said it aloud.

—Dora Dueck is interim editor of the MB Herald. She was in Paraguay for the Mennonite World Conference assembly.