What's New
A FOCUS on Mission
Must Patience Be So Slow?
Harold Jantz: A Heart for the Mennonite Story
Lorlie Barkman: A Life of Creative Engagement
Last Days, First Days
Women in Ministry: Bertha Dyck
January Moment in Prayer “Holy Spirit—Fill Us!”
The Church as the Patient Body of Christ
Advent: Making Much of Jesus: Christmas Day
Advent: Making Much of Jesus: Fourth Advent
Home News Volunteers repair homes and hopes 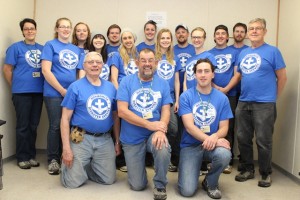 Ashley Mayberry has no regrets about giving up her spring break to sand, prime and paint newly installed drywall in High River, Alta.

“The best part was meeting the families,” says Mayberry. “We glorify God by reflecting God’s love to others and letting them know they are not alone. We are all neighbours on this earth and responsible for each other.”

Janet Plenert, director of MDS’s Canadian operations, says one of the strengths of MDS is having a constituency of Anabaptist churches who support the work of MDS as it helps people in Canada and the U.S. recover from disasters. This past year, 559 MDS volunteers have cleaned and restored homes in High River, a community whose 13,000 residents were ordered to evacuate last June. Many have not yet been able to return to their flood-damaged homes. Over summer 2013, MDS volunteers cleaned and sanitized 47 homes in preparation for work. 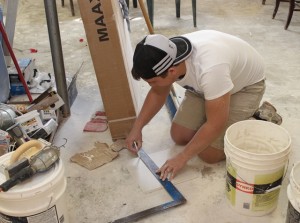 Since January 2014, volunteers have been repairing and renovating houses – primarily basement living spaces and bedrooms. To date, 28 residences have been completed.

MDS anticipates staying in High River through 2015. “We will keep on working until there is a reason to end,” says Plenert.

Janessa Giesbrecht, FGMB pastor of youth and college and career, sees a lot of value in “Canadians helping Canadians” – just like Jesus was involved in meeting needs in his community.

“Only a few people in our group had construction experience, but we had a willingness to learn and a willingness to do what was asked of us,” says Giesbrecht. “We went with the attitude that we are here to serve. What is needed, we will do.”

Mayberry has been part of FGMB’s college and career since November. On her first mission trip, she wanted to put her faith into action. “Just like people are sharing God’s love with me, I want to share it with others,” she says.

She returned to Winnipeg with a greater awareness of the trauma and chaos that families face when their homes are damaged by natural disasters, such as floods.

Mayberry loved sharing the excitement of two teenage boys as they selected the colour of paint for their newly renovated bedrooms in the basement of their home. The boys had lost their rooms and most of their possessions when six feet of floodwater rushed into their basement. This past year, they slept on couches in the living room on the main floor.

“It’s nice to know the boys will soon have their bedrooms back and their own space again,” Mayberry says. “We hear on the news that there was a flood but we don’t hear the stories. Hearing the stories made our work more meaningful.”