What's New
6 reasons to attend the MWC Global Assembly...
One too many
Just one more
A safe place in Winnipleg
When the sent are sent away
Leading through the trauma of covid: part one...
Church of Lithuania supports Ukraine Christians
A mennonite heart for refugees
A great time for building relationships
Multiply announces new General Director
Home News Ukrainian musicians in crisis 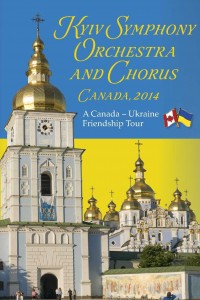 Ukrainian praises and harmonies in a Canada tour have been mixed with an unexpected counterpoint of trauma and medical crisis, occasioned by a serious ATV accident in the Alberta foothills Sept. 22, 2014. Mennonite Brethren, Alliance, Baptist and other Christian groups who hosted the Canadian tour have responded with a groundswell of prayer, financial help and kindnesses.

Kyiv Symphony Orchestra and Chorus violinist Andrii Fesiuk and soprano and bandura player Dasha Rugol were crushed when an all-terrain vehicle (ATV) rolled, breaking Fesiuk’s neck and causing head injury and multiple fractures to Rugol. Both went to Foothills Medical Centre for surgery. The prognosis is good for the violinist, who is to be airlifted to Kyiv Oct. 7, but at time of writing, Rugol remains in a coma.

The tour by Music Mission Kiev, under conductor and Bakerview MB member Wes Janzen and his wife Kim, brought 34 singers and 8 instrumentalists to 30 concerts across five provinces. The group were billeted by Christian supporters throughout their stay. The accident occurred as Calgary supporters provided a recreation day in the foothills for some of the musicians.

Host churches and pastors came together to spread the word for prayer, and to raise funds to cover medical costs that far surpass the $25,000 medical insurance policies for each musician. One Calgary donor provided resources to bring the families of the injured to Canada.

Janzen says he attempted to cancel the first Calgary concert after the accident, “But the entire team said emphatically ‘we must do it.’” Kim and assistant conductor Viktoriia Konchakovska co-led the concert while Janzen began to assemble a crisis management team. The ensemble continued their tour, ending on Oct. 12 in southern Ontario.

There were graces along the way. Janzen wrote supporters: “In Winnipeg, at the Ukrainian Catholic Metropolitan Cathedral of Sts. Vladimir & Olga, we held hands at round tables after a lovely noon meal as we prayed together. Ukrainian speaking Rev. Msgr. Michael Buyachok brought words of comfort and encouragement.

“Our hearts are heavy,” wrote Janzen. “Yet our concerts are going very well.”

As of the end of the tour, medical costs exceed a half-million dollars. Many donations have been made since the accident to Multi-nation Missions Foundation (P.O. Box 2401 Stn A, Abbotsford, BC V2T 4X3), a B.C. charity which supports the mission-oriented musical group.

See also
Family follows “the way of Jesus” to Ukraine

A note of hope from Ukraine

Family follows “the way of Jesus” to Ukraine