What's New
Through the conflict, life carries on in Ukraine
A FOCUS on Mission
Must Patience Be So Slow?
Harold Jantz: A Heart for the Mennonite Story
Lorlie Barkman: A Life of Creative Engagement
Last Days, First Days
Women in Ministry: Bertha Dyck
January Moment in Prayer “Holy Spirit—Fill Us!”
The Church as the Patient Body of Christ
Advent: Making Much of Jesus: Christmas Day
Home MB HeraldFeatures The world appears to be growing darker

The world appears to be growing darker 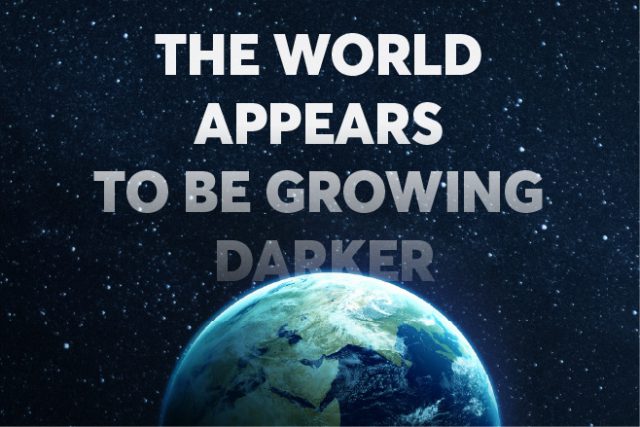 In the opening week of Russia’s invasion of Ukraine, Alexander Bulkin, translator for former Ukrainian President Viktor Yushchenko, was asked what he would say to Vladimir Putin. Bulkin blurted, “The easiest way to express my message would be ‘burn in hell.’ …I don’t have anything to say to this creature because it’s not a human being.”

“Either we lose in Ukraine, or the Third World War starts. I think World War III is more realistic…the most incredible outcome that all this will end in a nuclear strike seems more probable,” mused Olga Skabeyeva, one of Russia’s most prominent pundits. “But we will go to heaven,” bantered co-host Vladimir Soloviev. “And they will simply croak.”

Then Canada’s Defence Minister Anita Arnand spoke these disconcerting words in early May: “We do live in a world at the present time that appears to be growing darker.” The chaos of war in Eastern Europe (not to mention Cameroon, Yemen, Myanmar, Ethiopia and the occasional blustering of North Korea) is causing governments to reassess geopolitical strategies.

Unless you’ve come to Canada fleeing conflict somewhere else, it’s easy to assume war is for grainy black and white films. Didn’t the nuclear threat end when the Berlin Wall tumbled, the Soviet Union imploded, and the “good guys” won? Arnand continued, “…the world we live in today differs from the threat assessments that underpinned Strong Secure Engaged (Canada’s defence policy) in 2017.” That’s five years ago! In less time than it took for a child to be born and enter Kindergarten, that official document, “based on a long-term vision to respond to a changing world”, is deemed to have been changed by the world.

As a member of the World Evangelical Alliance’s Peace and Reconciliation Network (PRN) I have listened to my colleagues around the world speak of the destructive, proxy, ideological, and sometimes religiously influenced conflicts ravaging their lands in the last few years. North American communities are shaped – recently and not-so-recently – by displaced peoples from all these conflicts. The wounds are among us; even in us. Numerous tensions and unreconciled wounds fester beneath our society’s surface that is increasingly unsure how to keep it all from erupting. Climate change is opening the arctic, China is deemed a threat, and suddenly defense spending seems poised to rise. Here, there, and everywhere the reality of a looming threat is convincing Sweden – who stayed neutral in World War II – to join NATO, Germany to raise military spending astoundingly, and some African nations to quietly side with Russia. This coming darkness appears to be more than appearance.

How have Canadian churches used the last few years? Have we considered the theological and missiological foundations for life in World War III?

We’ve lived (are living) through a once-in-a-century (we hope) pandemic and warred over masks and mandates. Many, many churches have seen people leave one fellowship for another. Christians increasingly congregate around narrowing views and opinions. Theologies – even relationships – are tested by whether they are on the political left or right. Lamentably, a vast army who once graced our fellowships have dispersed into the spiritual swamp, shrugging off “church” for now, potentially permanently, and taking their children with them.

Meanwhile, the world grows darker. What if the last few years – including the pandemic – was missiological training to prepare Shalom-centered, ambassadors of reconciliation? Have we even been talking about this? In what was already a world marching toward larger-scale military conflict (remember the war in Ukraine began in 2014), have we been discipling our churches in biblical peace-making as the shadows lengthen? Or will ideological theologies – “progressive” on the one hand or militarized and nationalistic on the other – sweep us away?

Patriarch Kirill of the Russian Orthodox Church has called Russia’s aggression a “holy war.” In our PRN contacts we have heard Ukrainian pastors say, “Don’t send us Bibles, send us weapons.” And, when apocalyptic religious language is brazenly used to say who goes where when the next bomb drops, it seems a more whole Gospel is required. As a people in the peace church tradition this is what Mennonite Brethren have been entrusted with and it seems precisely what the world is seeking. Are we ignoring our moment? Are we forgetting that peace and reconciliation is not for the activists, but the ambassadorial mandate given to every Christian and every local church (2 Corinthians 5:16-20)?

Our Confession of Faith, our long communal conversation with Scripture, centers us.

Article 12 on Society and State states, “The primary allegiance of all Christians is to Christ’s kingdom, not the state or society. Because their citizenship is in heaven, Christians are called to resist the idolatrous temptation to give to the state the devotion that is owed to God. As ambassadors for Christ, Christians act as agents of reconciliation and seek the well-being of all peoples.

Article 13 on Love and Nonresistance says, “Believers believe that God in Christ reconciles people to Himself and to one another, making peace through the cross…. We seek to be agents of reconciliation in all relationships, to practice love of enemies as taught by Christ, to be peacemakers in all situations. We view violence in its many different forms as contradictory to the new nature of the Christian. We believe that the evil and inhumane nature of violence is contrary to the gospel of love and peace. In times of national conscription or war, we believe we are called to give alternative service where possible. Alleviating suffering, reducing strife, and promoting justice are ways of demonstrating Christ’s love.”

The International Community of Mennonite Brethren Confession declares, “Jesus came announcing the Kingdom of God. The mission of Jesus was to reconcile humans with God, each other and the world. The church is called to participate in God’s mission…. Peace and reconciliation are at the heart of the Christian gospel. Jesus calls the community of faith to be peacemakers in all situations.”

Our discipleship-centered evangelical-anabaptist heritage is the shared conviction of a global mosaic of Christians, not simply sixteenth-century Germanic ancestors, and part of our sacred contribution to the wider body of Christ. We have a mission precisely for this twenty-first century moment. In our evangelism we are inviting sinners to become children of God, the household of God, through the Word made flesh (John 1:12; Ephesians 2:14-22). In our discipleship we are being trained by Lord Jesus to be peacemakers, the long-identifying mark of the children of God (Matthew 5:9). And, as children of God within societies we are discipling the nations in the way of our Heavenly Father’s shalom; to do to the least of these what would be done to Jesus (Isaiah 2:1-5; Micah 4:1-5; Matthew 25:31-46).

How is our current theological wrestling equipping us for this necessary and glorious task?

How is your church engaging the biblical call to peacemaking as World War III looms?

How is your household practicing reconciliation in all things, so that there are people who have a holy clue of how to behave when the shadows lengthen?

How are our leaders learning to serve as war-era pastors?

How is our praying changing? Are we praying against the spiritual strongholds that are binding people, nations and systems? Who is if we are not?

David Bosch, assessing the epochal shifts in global mission in his landmark study Transforming Mission reflects soberly on the non-optional Gospel imperative to be peacemakers: “Our missionary involvement may be very successful in other respects, but if we fail here, we stand guilty before the Lord of mission.”

“The world appears to be growing darker.”

Does our theology, missiology, and ecclesiology sound like the extrapolations of a Russian pundit? Or are we people of The Book; a communion of radical disciples walking with the Prince of Peace?

Phil Wagler is the North American Network Coordinator, Peace and Reconciliation Network & Lead Pastor, of Kelowna Gospel Fellowship Church, in Kelowna, BC. You can follow PRN’s Reconciling Blog on The Evangelical Fellowship of Canada’s online version of Faith Today.

I am appreciative of this article lifting up the importance of the emphases of peace and reconciliation embedded in Scripture and the Anabaptist tradition. In response to the question, “Are we forgetting that peace and reconciliation is not for the activists, but the ambassadorial mandate given to every Christian and every local church…” I would answer that yes, many MB churches are guilty of forgetting this. Unfortunately, my observation is that “Our Confession of Faith, our long communal conversation with Scripture” is not centering us. Over the past few decades, many Mennonite Brethren communities have lessened their emphasis on pacifism and some BCMB churches have even removed convictions related to non-resistance from their Statements of Faith. Despite our conference’s warning not to (see Nature and Function of the Confession of Faith), quite a few BCMB churches have chosen to adopt more generic evangelical statements of faith like the Gospel Coalition’s Confessional Statement. It would seem that the assimilationist impulse that energizes white North American evangelical Christianity has eroded the peace witness of the Mennonite Brethren. Conference leaders demand “unequivocal commitment” to Articles 10 and 11 of the CoF which have to do with sexuality (a concern of hyper-focus among white North American Evangelicals over the past 50 years) while Article 13 on nonresistence has been excised from the Statement of Faith of several BCMB churches. This omission seems to be justified by some who consider nonviolence to be “complicated.” Confessional convictions regarding creation care are also omitted from some BCMB church Statement’s of Faith without concern from Conference leaders because apparently, it isn’t exactly clear what fidelity to this conviction looks like for churches. I hope Conference leaders are able to reach clarity on this crucial aspect of discipleship as we move devastatingly deeper into the Anthropocene. It appears that functionally, the CoF does not center Canadian MB’s. Until we are willing to address this reality, white North American evangelicalism, political identities, and unexamined theological biases will deemphasize and sideline historic Anabaptist emphases that might otherwise empower the MB church’s witness during an increasingly dark time.