What's New
A matter of love: Reframing abortion
“Any chance you might be expecting a goldfish?”
Abortion, the image of God, and faithful witness...
Choosing motherhood: The sacrifice of honouring life
MWC Assembly small but full of joy
Bad back doesn’t hold back MDS volunteer
Transition in CCMBC National Faith and Life Leadership
Leading through the trauma of covid: Part three...
The church distracted: When the main thing is...
Remote wilderness rescue turns into service with MDS...
Home Arts & Culture Book makes straw man of monologue preaching 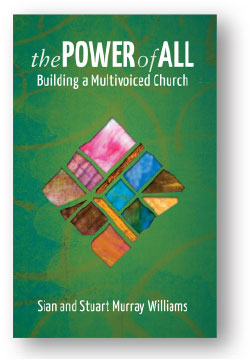 The Power of All: Building a Multivoiced Church
Sian and Stuart Murray Williams

In their book, The Power of All, Sian and Stuart Murray Williams extol the strengths of “multivoiced” churches and seek to provide resources and guidance “for those who want to move in a multivoiced direction.” The authors are active in church planting movements, church leadership, and training church leaders in the United Kingdom. Sian is a tutor at Bristol Baptist College and is the moderator of the Baptist Union’s Faith and Unity Department. Stuart is a trainer and consultant in the U.K.’s Anabaptist Network. He has also written several highly acclaimed books on urban mission, post-Christendom, and Anabaptism, including Planting Churches in the 21st Century and The Naked Anabaptist.

This reader did not find The Power of All as a compelling antidote to these issues because it used poorly (or completely un-) defined terms, and did not present a clear vision of how to move forward in a multivoiced context.

Without a clear definition of the strengths and weaknesses of the monovoiced tradition in place, this reader found the comments referring to the dangers of said tradition to be more like attacking a straw man than engaging a real, nuanced opponent. The reader does not know who the opponent is, only that we should not like him or her. This approach tastes more like propaganda than humble proposal. In a book devoted to hearing all voices regarding church life, the silencing and disregarding of the monovoiced tradition was both ironic and disheartening.

The authors’ views were founded on Scripture. For example, they use Acts 2 well to support their view that all kinds of people are filled with the Spirit and empowered for ministry. However, their bias against the value of monologue preaching in a multivoiced context (as described in chapter 5 of their book) forces them to read into the text the idea that Peter’s sermon didn’t function as a monologue because he “stood with the Eleven” (Acts 2:14). When the authors vouch for their multivoiced perspective from a historical point of view, they unfairly contrast multivoiced renewal movements with monovoiced spiritual stagnation. This characterization dismisses the ways in which the Spirit has moved through both of these styles for the good of the church and God’s glory.

The authors spoke of “church” almost primarily as the gathered assembly in the context of a worship service. It dealt so much with service dynamics that at times it felt like the hymn/chorus debates of some years ago. One group is stodgy, cold, irrelevant, and focused on traditionalism and the other group is fresh, passionate, authentic, engaged, and biblically supported. The functional use of “church” in this book primarily as the gathered assembly made many of the ideas proposed difficult for any church larger than 30 participants to apply well because everything must fit in the gathered assembly time. This reader hoped for a broader understanding and utilization of church.

One avenue in which many churches have already tried to incorporate the multivoiced ideas proposed in this book has been through the implementation of community groups. However, the authors scarcely mention community groups, and when they do, they swiftly assert that community groups often function as a subsidiary or dispensable aspect of church life (33). Many churches, especially in the Mennonite Brethren context, seek to provide authentic communities where people can genuinely be heard and known. For churches larger than 30 people, this type of tangible and life-giving community usually needs to happen outside of the gathered-worship-service setting. This reader found disregard for the value of community groups in the life of a church distasteful and counterproductive.

One of the most glaring weaknesses of the book was how the authors made too close a link between “listening and being led” and “passivity.” Monologue sermons and pre-designed worship and praise times, led by one or few people, are denigrated because (according to the authors) they necessarily breed a culture of passivity. This use of terms was unpersuasive because a) it holds too narrow a view of participation (i.e. primarily verbal), and b) it fails to account for African and/or Latin cultures whose services are designed similarly to North American services (e.g. monologue sermons and led singing times), but include more unplanned verbal participation throughout (“Can I get an amen?”).

A clear vision moving forward from issues facing our churches was not presented. For many church leaders and members reading this book, who are involved in a church community larger than 30, the ideas presented would be hard to incorporate well. The authors seemingly wanted to keep the book short and readable; though a tome need not be written, the final product is unconvincing because it didn’t take the space to properly define terms, nuance arguments, elaborate on proposed ideas, and allow a fair hearing of opposing viewpoints in terms those holding them would recognize and appreciate.

The Power of All reminds readers that the church is not primarily about bells and steeples but is indeed about the people. It prompts readers to ask questions surrounding how churches can more actively participate in worship, learning, community, and discernment together. The book may serve as a helpful resource for some in the Mennonite Brethren conference looking for answers to these questions, however the muddy use of terms and the deficient vision moving forward in a multivoiced environment left this reader in want.