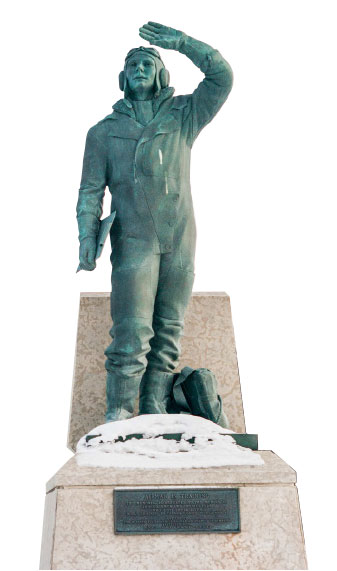 I was on my way to church. It was a cold, blustery day, so I was driving. He was standing against the wind, his hand up to shield his eyes, clipboard in hand. I didn’t think much of it until, on my way home, I noticed him still there looking up at the sky.

“What’s he looking at?” I wondered.

When I got home, I bundled up, grabbed my camera and headed out. I was curious. I also felt he needed company. No one should be left standing all alone in the cold.

As I approached, I could see he was in uniform with the headgear of a pilot. His satchel rested at his feet. Snow had built up around him. The wind was howling. I leaned into it as I trudged through the snow to stand next to him.

I looked up. I didn’t see anything.

He didn’t appear to notice me. “What are you looking at?” I shouted. He didn’t answer. Just as I was about to repeat my question, he said, “There’s one more.”

“One more what?” I replied.

“Neither do I.” With that admission, he heaved a sigh. “There were five planes that went out this morning on a test run, and only four have returned.”

Danger has a way of bonding people. These airmen train for the worst. That’s why they go out on days like today. They have to be ready for anything. War doesn’t only happen in good weather. They’ve all tasted fear. It’s the glue that makes strangers cohorts. They know that having a buddy with you in the trenches or the air – or waiting for you to come home – is what keeps you going.

“How long will you wait?” I asked him.

We stood together in silence. The wind chilled me to the bone. Reluctantly, I turned to go. His words were ringing in my ears – as long as there is hope.

I felt choked up as I made my way home. It took me a while to recognize where the emotions gathering in my chest were coming from: I longed for that. I longed for companions who would ride out the storms with me. I longed to be a friend like that.

It wasn’t long before people in my life who are like this man came to mind. I am blessed.

I whispered a prayer for the airman and his missing comrades. Life can be tough, filled with pain and uncertainty. Oh, to have someone watching for us.

Those same words echoed back to me on the wind: “Oh, to have someone watching with me.”

I looked up. I had read those words recently. “Stay here and watch with me” was his simple request. Jesus had just poured out his heart to his closest friends, Peter, James and John, as he anticipated his death. “My soul is crushed with grief to the point of death.”

Could it be that Jesus has this same longing for someone to wait with him, to wait for him, to be that friend, to have that kind of love?

I stopped for a moment to let that sink in.

Would I have been the first to run to his grave when the news came that he was alive because I had been waiting, watching, with hope? Am I that kind of friend?

A few days later, as I walked this same path, I saw the pilot still there, looking up at the sky. I stood beside him and joined him in his gaze. I guess there’s still hope. Yes, there is hope.

—Kathy Francis currently makes her home in Winnipeg and Halifax and other cities across Canada as she works on a book series, Conversations With Monuments.