What's New
Through the conflict, life carries on in Ukraine
A FOCUS on Mission
Must Patience Be So Slow?
Harold Jantz: A Heart for the Mennonite Story
Lorlie Barkman: A Life of Creative Engagement
Last Days, First Days
Women in Ministry: Bertha Dyck
January Moment in Prayer “Holy Spirit—Fill Us!”
The Church as the Patient Body of Christ
Advent: Making Much of Jesus: Christmas Day
Home Life & Faithfeature articles The Journey

Living the gospel as commitment to place, people, and perspective 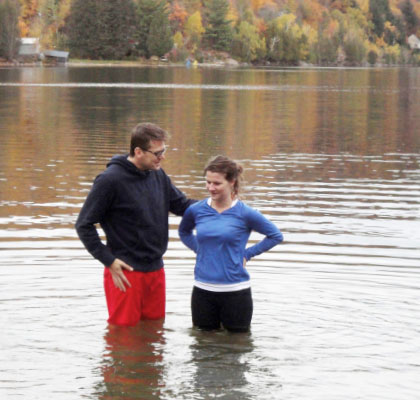 Through the freezing rain of a late December Ottawa afternoon, I catch the eye of a young man I’ve seen dozens of times before. A brief look of recognition crosses his face, before his eyes dart down to his smartphone. Continuing through the dusk, I pass 1920s era brick houses whose welcoming front porches demonstrate a bitter irony: even though I’ve lived in this neighbourhood for three months, I know nothing of the people who live there, nor the people I pass on the street every day.

A few steps away, the front door to the local community centre swings open. A young couple enters with their child. I make my way into the building, and soon I am sharing stories with them as if we were old friends, although I haven’t met either before. Later, we will worship together, and pastor Dave Harder will share his latest message on the Sermon on the Mount with some 100 people crowded into the main hall of the community centre. The sound system will not work properly, and the building’s temperamental boiler will make the room almost unbearably warm, but no one will complain.

This is MB church plant the Journey: a church with no parking lot, no sanctuary, and almost no regular programming. It has no pulpit, no stage, no piano – and after the service, everyone has to put away their own plastic chair. But for its members, this church is not about the meeting place; it’s about finding connection and hope in the midst of a culture that promotes the opposite.

At the core of the Journey is the radical idea that a church should act as the heart and soul of a neighbourhood not through church programs, but through the intentional creation of Christ-centred communities. For Harder, church is “not about going to a building and providing programs for people to come to, but actually loving the neighbour right beside us.”

The Journey’s vision is to see the city of Ottawa renewed by Christ, one neighbourhood at a time, through what Harder calls “city parishes.” In this model, parishes are linked together as one network, each serving as the heart of individual mission-focused communities designed for a specific neighbourhood.

This complete re-imagination of what church looks like in contemporary society may seem new and radical; however, it draws inspiration from the early church and ministry of the apostle Paul.

Unlike the agrarian village tradition of Mennonites, the early Christian church was mainly an urban movement. Though Paul travelled widely, he also stayed in certain cities for long periods. Focusing his attention on the metropolitan centre of Ephesus, Paul spread the word of Jesus to every person in the province of Asia (modern-day Turkey) within two years. And he did this not from a temple but from a public lecture hall (Acts 19:8–10). This early church was also founded on the basic principles of sharing meals and gathering in people’s homes for worship (Acts 2:46).

Today, with an estimated 80 percent of Canadians living in metropolitan areas, contemporary church planters are turning once again to the parish model as a way to demonstrate the kingdom of God within the mess and sprawl of today’s cities, where ideals like consumerism,

individualism, hyper-sexuality, and the search for power reign supreme. Harder envisions each of these parishes as a lights on a hill for their own urban landscape: places where people can re-discover simplicity, experience real human connection, and transform their yearning for power into wholeness in Christ. 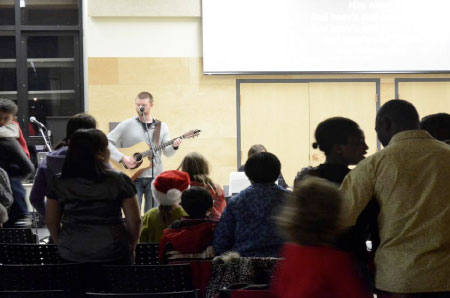 To set others questioning their own culture, Harder first had to study it himself. “I wanted to get to know my city, to be discipled by my city,” Harder says. When the Harder family arrived in Ottawa in summer 2008, they came to plant a church, and spent about a year doing almost nothing related to church planting. “We were going to live on mission,” says Harder. This looked a lot like backyard barbeques, play dates at the park, and “going into coffee shops and asking a ton of questions.”A food aficionado usually decked out in the latest fashions, Harder appears to belong in a cosmopolitan city like Ottawa. Projecting a cool persona or fitting in, however, are far from his priorities. Instead, he seeks to live “in a way that causes people to ask questions.” For Harder, his wife Kari, and their three preteen children, this can mean anything from hosting neighbourhood dinners, to opening their home to someone who needs a place to stay for a few nights, to simply stopping to chat with a neighbour.

Part of what Harder learned from this experience was how distinct Ottawa’s many neighbourhoods are from one another. So rather than try to bring people out of their unique communities and into one monolithic church, Harder decided to plant many “neighbourhood expressions of church.”

“When you break it up into neighbourhoods, you can actually be more strategic in how you live the gospel in that place because you’re living into the story of that neighbourhood and then you’re applying the story of God,” he says.

This is a strategy that appears to be working in other metropolitan centres, most notably in New York City, where Trinity Grace, another community-focused church, has established eight neighbourhood parishes in the past six years. Harder has visited Trinity Grace, and sees them as a source of inspiration. “We look to Trinity Grace as a big brother of sorts,” he says.

Harder now has similar plans for Ottawa. For three years, the Journey has been holding its Sunday services in Old Ottawa South, an urban neighbourhood not far from the downtown. The Journey is now ready to open two new parishes in the suburbs of Orleans and Manotick. In these communites, the story of God will be the same, but it will be told in different ways. 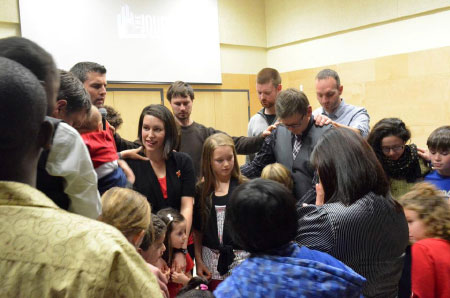 When Conner and Renee Hildahl, both in their early 20s, arrived in Ottawa in September of 2012, they weren’t interested in church-shopping. They’d just spent time in San Diego with members of an intentional Christian community called NieuCommunities, and got hooked on the idea of living their own lives with a more purposeful sense of community. Conner sees the idea of intentional communities as a response to a common desire of his generation for “just being known and knowing people.”

Half of the experience of church is interacting with the people who form the community – “you committing to them and them committing to you,” he says. “It’s more than just showing up and saying, ‘How do you meet my needs?’”

For some, the type of “hands-off” approach that Harder and the Journey’s pastoral team take toward community-building might be a barrier, but for others like Conner, it opens up new opportunities. “If you’re committed to Monday night Bible study, Wednesday night small group…where’s the space in there to just invite your neighbour for a meal?” he says.

Part of what first struck the Hildahls about the Journey was how welcoming the people were. “They would do anything for us,” Conner says.

This attention to personal relationships first drew another young married couple, Heather Douglas and Andrew Dick-Douglas, to the Journey. Heather, who is studying to become a high school teacher, has been part of the Journey for almost as long as Harder has. Andrew, now a second-year medical resident at a local hospital, joined her in July 2011.

“Our church started off as about 20 people and it was very relational,” says Andrew. “There were always people sharing stories…. You knew what was going on with everybody.”

A big part of this relational experience for them was honesty and openness. “People were really vulnerable with their stories and the things they had struggled with. It was very refreshing for me,” says Heather. “Pastor Dave was willing to let the conversation go to the messier places of faith and not just shy away from that.”

One way the church fosters this spirit is through “huddles” – small groups of three to five people who meet once a week for fellowship and prayer. More than just Bible studies, the purpose of these groups is for people become part of each other’s lives as missionaries in their own community. “The idea is to keep each other accountable and to see how each one is growing,” says Conner.

But with the church community quickly growing to 100, 150 people, and beyond, there have been many changes, and with changes comes the challenge of learning to let go. “With any growth there’s always a bit of pain that’s involved because you need to be willing to let relationships grow. If you hang too tightly to them there’s no space,” says Andrew.

Since they joined the Journey, Heather and Andrew’s home is regularly filled with sharing, discussion, and celebration. As a student teacher as well as a volunteer youth worker, Heather has developed friendships with several young people from the neighbourhood, and extended that friendship into her own home. “Our dinner table is generally a pretty active place,” she says.

Heather and Andrew are also intentional about sharing their living space beyond the dinner table with people who might need help. “We’ve got a spare bedroom in our house, and we’ve only had a few weeks in the years we’ve lived here that it’s ever been empty,” says Heather. “We’ve just tried to keep that space open and be prayerful and receptive to who could be in it.”

Sometimes this means that in order to live on mission, Heather says, they have to become “comfortable with the uncomfortable.”

“[The Journey] is not a comfortable place if you’re looking for structure,” she says. That discomfort, however, is central to the health of the communities that are developing. “If we’re becoming comfortable with the ‘uncomfortable’ of being the one in the room who doesn’t know people, or inviting people into our home, those are just such valuable experiences and skills to acquire,” she says.

Before moving to Ottawa, Harder and his family were involved with church planting in Calgary and Vancouver. “My wife and I had always dreamt about Ottawa,” Harder says, but actually making the move was not a spur-of-the-moment idea. “After 14 years of ministry, we just felt release that ‘now is the time to go.’”

Their oldest daughter Emily, then eight, captured the family’s thoughts at the time: “We’re going to miss Vancouver and our friends,” she said, “but it’s more important that we’re obedient to God and his mission.”

Three years later, Harder has learned that they way of Jesus really works; that “when you make disciples, they go out and make other disciples.”

It’s this attention to God’s call that demonstrates the key to the Journey’s success. The real reason they’re seeing lives radically transformed is not due to their model of church planting, focus on creating missional communities, or the fact that they have less programming.

What’s really behind the growth of the Journey? Harder says: “God has been the hero of the story.”

—Casey van Wensem attended the Journey, an MB church plant in Ottawa, September–December 2012 while interning with the MCC Ottawa office. He now lives in Victoria with his wife Amy.

[…] article was first published in the MB Herald in April […]