Newer is not always better 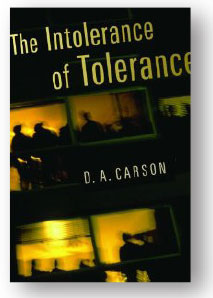 The Intolerance of Tolerance

The last thing any good Canadian wants to be accused of is intolerance. However, regardless of how winsome and gracious our tone, articulating an exclusive truth claim with conviction will lead to accusations of intolerance.

However, it wasn’t always understood that way. Tolerance used to mean allowing differing views to exist, even defending the societal right for differing views to exist, without abandoning one’s own convictions. In light of this, Christians must be ready to critique the current interpretation of tolerance, and point back to the older understanding, while continuing to proclaim the most inclusively-exclusive truth claim: the gospel of Jesus Christ.

It’s fair to say Carson’s voice on the matter of tolerance ought to be equally important for readers in both Canada and the U.S. The son of a Quebecois pastor, he has many Canadian connections though the majority of his academic experience has been in the U.S. He serves as research professor of New Testament at Trinity Evangelical Divinity School, and is co-founder of The Gospel Coalition.

One of the strongest elements of The Intolerance of Tolerance is its exposure to this significant transition in the definition of tolerance. Under the old definition, forcing a person to believe something particular rather than allowing for disagreement was considered intolerant. Under the new definition, disagreeing with someone’s view (on the grounds it is not truthful or valuable) is called intolerant.

This transition of definition “is subtle in form, but massive in substance,” says Carson.

Carson defines his terms and develops his arguments well. His writing is thorough and balanced. Carson is not a curmudgeonly old man who wants to go back to an older definition of tolerance simply because it is older. He is balanced in his perspective and acknowledges that “both the older tolerance and the new have obvious limits.”

Bring back the old

Carson doesn’t suggest “the old tolerance always got things right while the new tolerance always gets things wrong.” Nevertheless, he maintains that the older understanding of tolerance is still preferable to the “moral and epistemological bankruptcy” of the new definition – and that Christians “must keep making clear what (old) tolerance consists in, and do what we can to undermine the new tolerance.” Though not perfect, the old definition of tolerance is preferable because the new definition is intrinsically self-defeating, and seems to have its target set primarily on Christianity.

Christians in the West would be wise to engage with this seminal and relevant work. The current definition of tolerance is an a priori assumption for many people and therefore goes almost entirely unquestioned. Carson is right when he says that “tolerance currently occupies a very high place in Western culture… [and] has become part of the Western ‘plausibility structure.’”

Differentiating between the old and new definitions of tolerance is not merely a matter of semantics. A faithful Christian witness in Canada will necessarily mean communicating with conviction the truth that Jesus Christ is himself the way, truth, and the life, and that no one will get to the Father except through him (John 14:6).

This exclusive statement will, without a doubt, elicit accusations of intolerance in the Canadian marketplace of ideas because “Intolerance is no longer a refusal to allow contrary opinions to say their piece in public, but must be understood to be any questioning or contradicting the view that all opinions are equal in value, that all worldviews have equal worth, that all stances are equally valid.”

If the Mennonite Brethren want to be faithful communicators of the gospel in our pluralistic and relativistic culture, we need to be equally prepared to be called intolerant, and also prepared to engage in dialogue about the definition of tolerance. Carson’s insights in The Intolerance of Tolerance will greatly aid us in our mission.